Learning numbers is a basic but necessary step in learning Spanish. Just like learning the Spanish alphabet.

So, have no fear. This quick guide will get you counting in Spanish from “cero” all the way to “cien” in 4 easy steps.  “Cien” is how you say 100 in Spanish by the way. All you need to do is learn how to count from 0 to 15. From 16 onwards, you will find that numbers follow a pattern that even a caveman can understand. 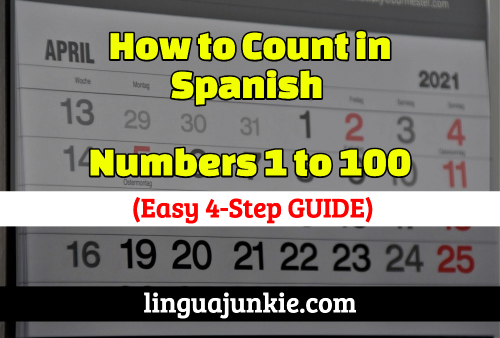 It is very important that you master the numbers from 0 to 10. This will lay a solid foundation if you want to count from 16 onwards.

One of the main differences between Castilian and Latin American Spanish is the pronunciation of:

So now we only need to learn five more numbers before we can see how Spanish numbers follow a general pattern. These are:

The numbers from 16 to 19 are formed by following the pattern:

Now things get even easier. All you need to do is learn the multiples of ten and then you’ll be able to easily form any number you want. So let’s take a look at the tens first:

It’s important to note that from 31 onwards, the numbers are not bound together anymore. They will no longer be written in a single word.
The basic construction is:

Now let’s look at, say, the 90’s. This is just for you to truly see that from 31 onwards, numbers are constructed in the exact same way.

Let’s take a look at a few examples of numbers from 31 to 99 to make sure that you now know how to count in Spanish:

You need numbers for countless situations in your everyday life. Let’s take a look at some examples where you will find yourself needing the Spanish numbers:

Conclusion on Counting in Spanish 1-100

Now, you know all the numbers, all the patterns, and you should be ready to start counting in Spanish.

But of course… as we all know, learning things just once doesn’t mean you’ll retain it forever. So….

Be sure to print or come back to this page and review often. Eventually, it’ll all be as natural as the grass on the ground.