Want to learn the Spanish alphabet?

Well, here’s the guide that will help you nail down all the letters.

I’ll also give you a printable PDF worksheet to practice with. Cool? Cool. 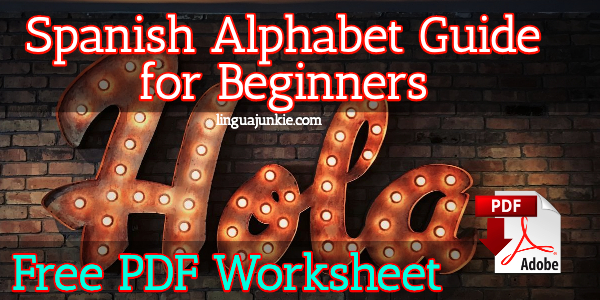 Part 1: Introduction to the Spanish Alphabet

Spanish is one of the most spoken languages in the world. If you’re looking to learn it, you’ll want to start with the alphabet. So, here are some quick things to know.

In Spanish, words are pronounced the way they are spelled. So it’s important that you learn how each letter (or combination of letters) is pronounced first.

Once you master the sounds, you will be able to pronounce almost any word.

Now that you know a bit about the alphabet, you now need a chart.

One of the main differences between Castilian and Latin American Spanish is the pronunciation of:

In Latin American Spanish they are both pronounced like a regular “s.” However, in Castilian Spanish, the sound is similar to the “th” in “thunder.”

It only has one additional consonant: ñ.

This means that reading and writing in Spanish will not be much of a challenge. In addition, despite the fact that they are not close relatives, English and Spanish share a number of cognates. Cognates are which are words that look or sound similar in both languages.

So that means there are many Spanish words that you already know!

Here a few examples of cognates in Spanish and English:

Part 4: How is it different from English?

Here’s a quick run down of how the Spanish Alphabet and the sounds are different from English.

As mentioned before, the Spanish alphabet has one additional consonant that you need to look out for…

The sound is similar to the “ny” in canyon. Although it may sound a little bit strange at first, it is not hard to pronounce.

These are some examples:

In addition, there are certain combinations of letters that you also need to look out for:

However, the pronunciation of “rr” is a different story. This is undoubtedly the hardest sound for an English speaker to produce. It is called the “strong R” or “double R” and there is no English equivalent. It is basically produced by trilling the tip of your tongue against the alveolar ridge. This is on the roof of your mouth, behind your front teeth. Anyone can learn how to roll the “R.” However, it does take practice.

There is also a “soft R” or “single R” in Spanish. Producing this sound is not much of a challenge. It is similar to the “tt” in “little,” “better,” or “butter.”

In some cases, the “single R” is pronounced like a “double R.” Let’s look at some examples:

4) Combinations with a silent “U”

You must also look out for these other letter combinations, where the “u” is not pronounced:

However, there are words where we need to pronounce the “u” in “gue” or “gui.” In this case, we use the “diéresis.” These are two dots placed above the vowel “u.” They can only be placed above this vowel. The “ü” is not a distinct letter in the alphabet.

You must also remember that the “H” is silent in Spanish. It is only pronounced in words that are adopted from foreign languages. For example, “Hawai” is pronounced in the same way in Spanish as it is in English.

Now, let’s take a look at the vowels.

Unlike in English, Spanish vowels are “pure.” In English there are 4 “diphthong-pronounced” vowels, which are: a, i, o, u. This means that you actually make two sounds when you pronounce each. Try pronouncing the vowel “a.” Do you see how you make the sound “ayy”?” In Spanish, however, vowels are as “pure” as they can get. You only make one sound when producing them. You just say “a.” Like the “a” in “father.”

The sound is also shorter in length. Regardless of their position in a word, vowels are always pronounced the same way.  This means that there are only five vowel sounds in Spanish. Did you know that depending on regional dialects, English has more than 14 vowel sounds?

You may have seen vowels with accent marks (á, é, í, ó, ú). However, these are not considered distinct letters in the alphabet either. Spanish accents are called “tildes” and they can only be placed above vowels. When you see a vowel with a “tilde,” it means that the vowel is stressed in the word. This is something you need to look out for to achieve proper pronunciation. There are, of course, grammar rules for the use of accent marks, which you will see further along your language learning journey.

Now, you should be fairly acquainted with the Spanish alphabet and the pronunciation.

If you want a Spanish PDF worksheet, then check out this Worksheet from SpanishPod101:

Other Spanish lessons to check out on my site: