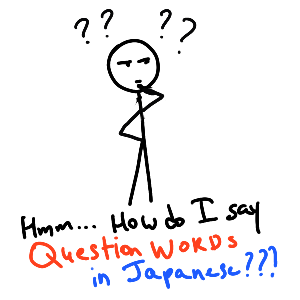 You need them to know how to ask questions in Japanese.

So, keep reading. In this guide, you’ll master all of the Japanese question words in a few minutes.

There are 9 main Japanese question words that cover who, what, when, where, why, and which. Some words have multiple options compared to English — hence 9 words. So, you’ll need to know which one to use.

An important difference between English and Japanese question words is that you have to maneuver the politeness of each phrase depending on who you’re talking with.

As you learn each word, see the example phrases to learn how to make it polite or casual. 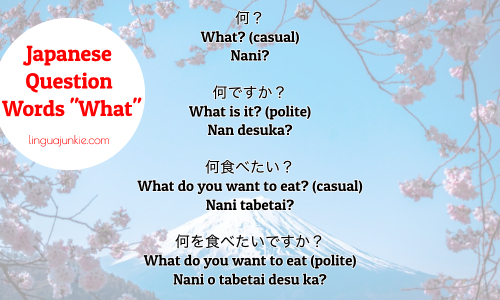 How do you say what in Japanese?

The Japanese word for “what” is 何. You can also combine it with a wide range of verbs and particles to create interesting questions. Make sure not to use this word for making interjections like “what?!”. Although you’ll hear this in manga and anime, it can be weird for daily speech. 何 can have two different pronunciations, nani or nan, that are used in certain phrases to make it flow better. However, both mean the same thing.

By the way, a common question you’ll need to know is… “What’s your name?” So, here’s how you say it in Japanese.

You should also listen and hear real Japanese. Press play below. Try this free lesson from JapanesePod101 on how to say “What’s your name in Japanese?” 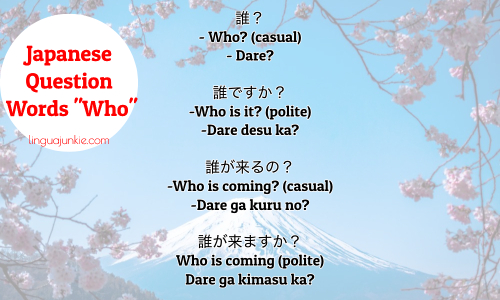 Let’s start with one of the most common Japanese words.

This is the word for when you want to make a “who” question sentence. You can combine it with a variety of verbs and particles to ask specific questions. The last two examples show how it can be combined with the verb “to come”, or 来る (kuru). Try making your own sentences by adding a verb that you know. It’s also good to understand that 誰 (dare) can sometimes be used to talk about no one, someone, or everyone. For example, 誰もいない (dare mo inai) means “no one is here”. Don’t get confused if you see it in a different context than a question phrase. 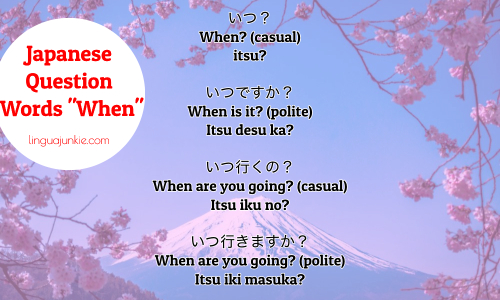 Use the “when” question word to find out about someone’s past, to make plans, and more. Combining the question word with a verb like 行くor “to go” can be a great way to ask about upcoming travel. This question word also makes up other phrases that mean different things from “when”. For example, いつも (itsumo) means “always”, いつでも (itsudemo) means “whenever”, and いつか (itsuka) can mean “someday”. 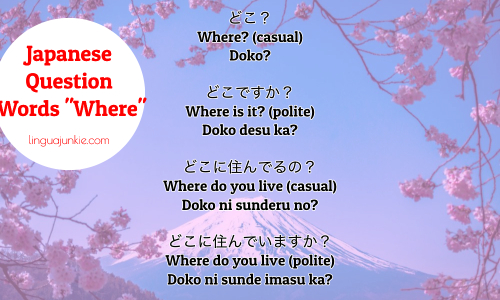 If you somehow find yourself lost in Japan, you’ll find that “where” is a lifesaver. This word can be used as a way to form many different sentences to ask about locations. To ask for specific locations, you can add the location at the beginning followed by はどこ？(wa doko?). どこ (doko) is also a great icebreaker word when you want to know where someone lives or comes from. 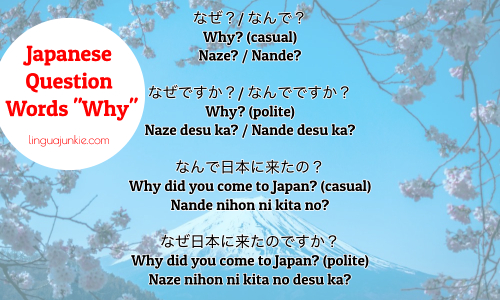 With “why”, there are two main options that you can use. なぜ (naze) sounds formal or old fashioned. なんで (nande) is more casual. However, both words can be used in both situations. By changing up the phrasing, you can make it sound polite or casual. These question words are highly recommended if you want to have a conversation with someone. Asking “why” is a great way to have someone elaborate on a topic and you’ll learn more about them. 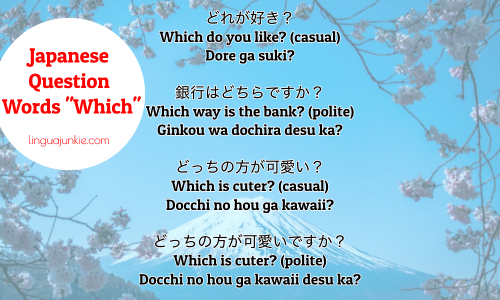 How do you say which in Japanese?

Well, this is one of the more complicated question words in Japanese. There are 3 main ways to say “which.” First, there’s どれ (dore) which is the most neutral “which” word that fits into both casual and polite situations. Then, どっち (docchi) has a more casual connotation. Then, どちら (dochira) sounds a bit more formal. If you’re asking for direction, like asking “which way is it?”, you can only use どっち (docchi) or どちら (dochira). Knowing how to use these in the right situations takes practice and listening to native speakers.

Conclusion – Back to You, Japanese Learner.

Now you know all of the Japanese question words… and you have have examples to lock them into your brain.

For extra review, you should close your eyes and see if you can recite each of the question words out loud.