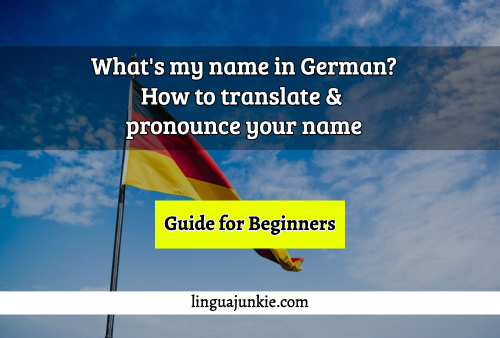 This quick guide will tell you how to say your name in German. So of course, you’ll naturally learn a little bit of German pronunciation too, okay? So….

By the way,  you should also hear REAL German. So, here’s a free German audio lesson from GermanPod101 – a popular German learning program. Press play and learn how to introduce yourself.

To say your name in German, first let’s brush up on 6 German pronunciation rules. Knowing these will help you say the name correctly.

Rule 1: The German R is guttural

Guttural means that it comes from your throat. To get an idea of how the R is produced, take a sip of water, tilt your head back, and gargle. Try to say “ahh.” You should feel your throat vibrate. Now you can try to reproduce this sound without the water.

What does that mean?

It means you only make one sound when you produce them. English has 4 “diphthong-pronounced” vowels (a,i,o,u), which means that you make two sounds when you pronounce each. For example, when you pronounce “A,” you make 2 sounds: “e-eey.” This is not the case in German. Vowels can be either long or short, but they are not diphthongs.

Rule 3: Pronunciation of CH is different in German

CH sounds differently depending on what letter it stands in front of:

Rule 4: The letter “W” is pronounced like the English “V”

When you see a name containing the letter “W,” you must pronounce it like the English “V.”

Rule 5: The letter “J” is pronounced like the English “Y”

Rule 6: The letters “B: and “D” are hardened if they are at the end of a syllable or word

If you see a “B” at the end of a syllable or word, you need to pronounce it like the English “P.”

If you see a “D” at the end of a syllable or word, you need to pronounce it like the English “T.”

Now that you know a few rules, let’s get to the actual names.

Here are some English names translated to German.

If you’re wondering, “How to spell my name in German?”….

Take a look below. You can refer to this chart if you want to know your name equivalent in German. Be sure to learn the right pronunciation.

Part 3: How to Introduce Yourself in German

Now that you know how to pronounce your name in German…

Let’s learn how to introduce yourself in German. — formally and informally. First of all, you must know that there are two forms for “YOU” in German: “DU” and “SIE.”

The literal translation of the verb “heißen” is “to call oneself.” Note how the verb is conjugated differently depending on whether you use DU (informal) or SIE (formal). Now let’s see how you conjugate it with ICH (I), when you want to respond to that question.

You can also use this alternative to introduce yourself, which literally means: “I am…”

This is a more formal way to introduce yourself.  It literally means: “My name is…”

Now, how would you say “nice it meet you” in German?

6. Es freut mich, dich kennenzulernen.  I am glad to get to know you. (Informal)

7. Schön, dich kennenzulernen. Nice to get to know you. (Informal)

Now, you don’t have to wonder what your name is in German.

You learned some basic pronunciation rules.

And you how how to introduce yourself.

Now, introduce yourself in German in the comments below.