Want to learn the German alphabet?

Well, here’s the guide that will help you nail down all the letters

Then, I’ll give you a printable PDF worksheet to practice with. Cool? Cool. 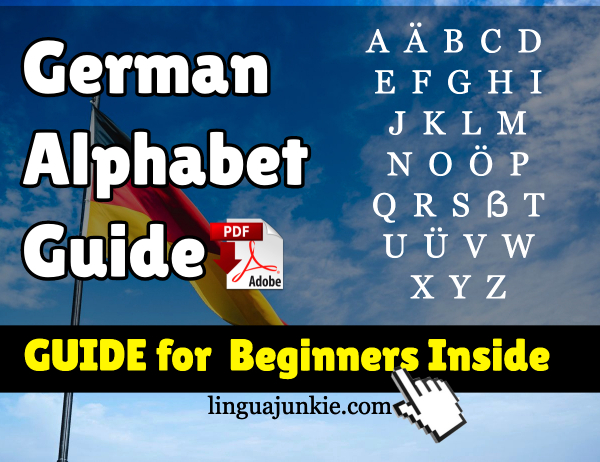 Part 1: Introduction to the German Alphabet

The German language is considered one of the most difficult languages in the world. With its three noun genders, its complex grammar, and compound words, many consider German as a nearly impossible language to learn. However, all you really need to learn this beautiful language is commitment and motivation.  And to start that journey on the right foot, the first thing you need to master is the German alphabet.

The German alphabet is quite similar to the English alphabet. It basically contains the 26 letters included in the English alphabet plus 4 special letters: one consonant (ß) and 3 “umlauted” vowels (Ä, Ö, Ü). They are called “umlauted” because the “Umlaut” is the pair of dots placed above the vowels. This would make up a total of 22 consonants and 8 vowels.

Mastering pronunciation is a lot easier in German than in English. This is because German is way more phonetically consistent.  This means that words are typically pronounced the way they are spelled. Unlike English, there are a lot of rules that can be followed to achieve proper pronunciation. In addition, let’s remember that German and English are both West Germanic languages, which are part of the Indo-European language family. As a consequence, many words look or sound similar to the way they do in English. We call these words “cognates.” German and English share a large number of cognates, which will certainly make the language learning process easier.

Let’s take a look at a few examples of cognates in German and English:

*In German, nouns are spelled with a capital letter.

The most important similarity between the German and the English alphabet is that they both share the 26 letters included in the Latin alphabet. This will definitely make it easier for you to start reading and writing right away.

In addition, the large number of cognates that English and German share will definitely make your language learning journey easier, since you’ll be able to guess what many words mean.

Part 4: How’s it different from English?

As mentioned before, the German alphabet contains 4 additional letters that you will need to look out for.

Let’s take a look at these.

Perhaps the most difficult letter to pronounce in German is the guttural “R,” which comes from the throat. To get an idea, take a sip of water, tilt your head back, and gargle. Try to say “ahh.” You should feel your throat vibrate.

Now let’s take a look at the German vowels. In English, we have 4 “diphthong-pronounced” vowels: a, i, o, u. This means that when you pronounce them you actually make two sounds. Try to pronounce the vowel “i.” Do you see how you make the sound “ah-eeh?” Unlike English, German has “pure” vowels. This means that you only make one sound when producing them.

Vowels can also be combined to produce a new sound. Excluding “ie,” these sounds are diphthongs. “Ie” is just a long German “i,” like in “needle.” The other combined vowels are:

Now let’s take a look at some consonants that are pronounced differently in German. The letter “z” is pronounced “ts.” Also, the combination “ch” sounds differently depending on what letter it stands in front of. If you see “ch” after an “e” or “i,” the pronunciation resembles a hissing cat. However, if you see “ch” after an “a,” “o,” or “u,” it is similar to the English “h,” but it is produced further back in your throat. There are also words of foreign origin that begin with a “ch.” In this case, “ch” is pronounced “c” as in “cat.”

We have seen that English and German share a large number of cognates. However, you must know that the so-called “false friends” also exist. This means that a word may be similar in English and German, but its meaning may be different.

For example, take the English adverb “still.” In German, it is an adjective that means silent. Just for you to get an idea of how misleading a similar word can be, think of the word “gift” in English. Can you imagine that in German, “Gift” actually means poison?

On Learning the German Alphabet

Now, you should be fairly acquainted with the German alphabet and the pronunciation.

If you want a German PDF worksheet, then check out this Worksheet from GermanPod101:

Other German lessons to check out on my site: