This guide will help you nail down the Italian alphabet

Then, I’ll also give you a printable PDF worksheet to practice with. Cool? Cool. 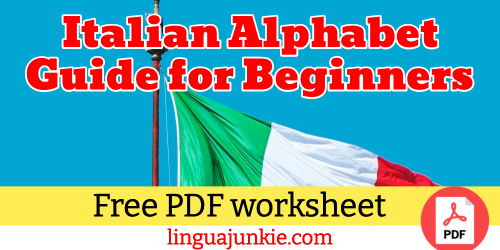 Part 1: Introduction to the Italian Alphabet

Italian is considered one of the most romantic languages in the world. If you want to learn this beautiful language, the first thing you need to do is…. learn the Italian alphabet.

So, it’s important to understand the pronunciation rules and how each letter (or combination of letters) is pronounced. Once you master each sound, you will be able to pronounce almost every word! Sounds good, right?

Regarding language families, Italian and English are not closely related. But, they both evolved from the Indo-European language.

Since both languages share the same origin, they also share many “cognates.” What are cognates you ask? Cognates are words that look or sound alike in both languages.  Let’s take a look at a few examples:

So here’s the alphabet chart that you will need. Feel free to print this part out.

This will help you understand how to read the Italian alphabet.

As mentioned before, the Italian and English alphabets are similar. It will therefore be easy to start reading and writing from the very beginning. Although the letters: j, k, w, x, and y are not included in the Italian alphabet, they are sometimes used (mainly in borrowed words) and they are generally pronounced just like they are in English.

In addition, since both languages share many cognates, there are many Italian words that you already know.

Part 4: How is it different from English?

There are several differences between Italian and English that you need to look out for.

1. Remember that the H in Italian is silent.

2. The letter C has a hard and soft pronunciation. Take a look.

3. The Letter G also has a hard and soft pronunciation.

4. You must look out for double consonants in a word. In this case, the sound must be longer; you need to double its length.

5. The letter S is usually pronounced like the S in Sam. However, if you see an S between 2 vowels, then it sounds like the Z in zebra:

7. The letter Z is pronounced like the ts in shirts. You already produce this “ts” sound when you pronounce the Italian-borrowed word pizza.

8. The single R in Italian is pronounced like the “tt” in “better.”

9. The double R is trilled. In other words, roll your “R.” This is undoubtedly the hardest sound for an English speaker to master. To produce it, you need to learn how to roll your tongue. You basically do this by trilling the tip of your tongue against the alveolar ridge. This is on the roof of your mouth behind your front teeth. Anyone can learn how to roll the R, but it does take practice. Let’s look at some examples:

It is important to learn how to achieve the full trill when pronouncing the double R, since not doing so can completely change the meaning of a word. Let’s look at this example:

There are, of course, some exceptions. For example, when the GLI is at the beginning of the word, you need to pronounce it “glee:”

11. Letter combinations — SCE and SCI. These are pronounced “sheh” and “shee” respectively.

12. Vowel pronunciation. The vowels E and O have both an open and a closed pronunciation. Vowels are also pure, which means that you only make one sound when producing them:

Now, you should be fairly acquainted with the Italian alphabet and the pronunciation.

If you want an Italian PDF worksheet, then check out this Worksheet from ItalianPod101:

1 thought on “The Italian Alphabet: Quick A-Z Guide for Beginners Like YOU”