You’re here because you want to learn Russian Grammar! Good.

This guide will help you grasp the rules and the structures of the Russian language.

Will it be easy?

Uh, that depends on you. Hey, the more you review and practice, the easier Russian grammar gets! 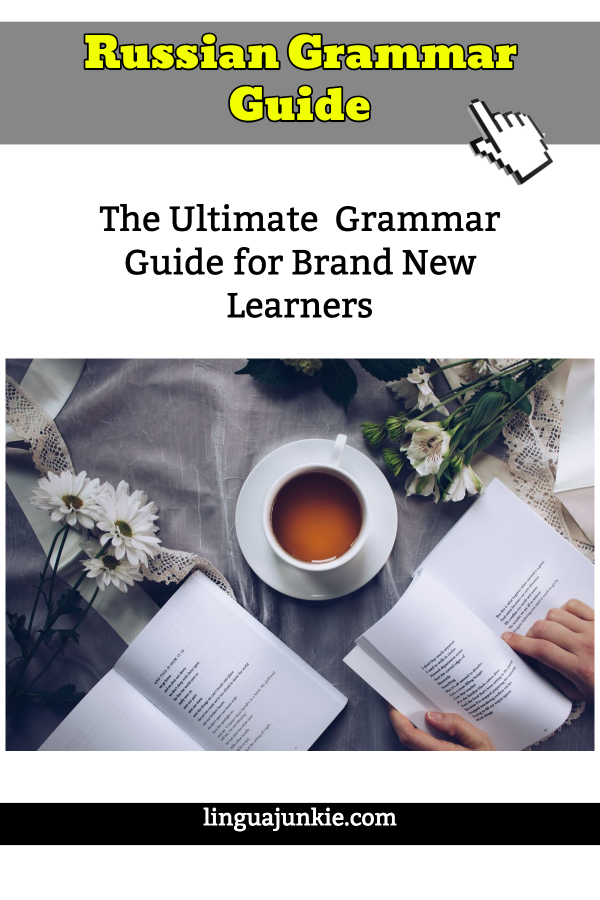 And maybe you’re right. While you’ll learn the basic, must-know rules here, a nice book or learning program will set you straight.

So, first, here are some Amazon Russian Grammar resources that you might want.

Alternatively, if you don’t want books but a full, digital Russian learning program, then I recommend:

But, Russian can also be very, very flexible. It doesn’t mean that you can arrange words in any order you like, but, still, it is much more flexible than in English.

Take a look below.

That sentence means “The dog caught the cat today.” There are 8 different variations! They all mean the same thing! 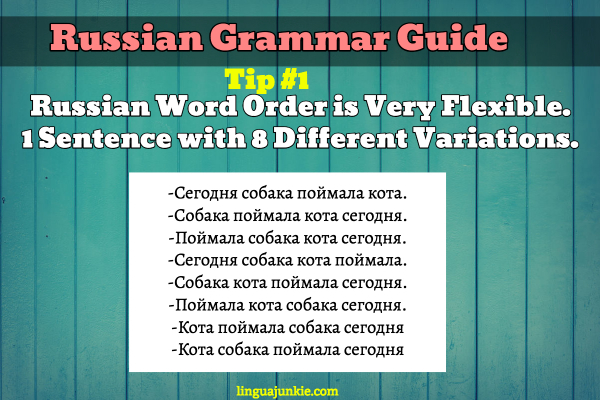 Let’s also look at this example!

In the first sentence, we have the predicate after the object. In the second sentence, the predicate is before the object. The Subject “I” (Я) remains in the same place in both cases. It would sound awkward to a native speaker if you put the subject in the particular case in another position.

Wait, it wound sound awkward… unless there is a difference nuance!

In the “I love you” example, you’re just trying to state a literal “I love you.” If you rearranged the words, the nuance was different. For example:

This can still make sense, in a poetic sort of way.

But, some words always have fixed position in the sentence.

For example, adjectives usually stand before the noun they modify:

Here, “жаркая” (hot) is the adjective and “погода” (weather) is the noun it modifies.

What’s next in this Russian grammar guide for beginners?

You’ll see what I mean.

The Russian language is very rich in palatal or, in other words, “soft” sounds.

Wait, what does that mean in plain English?

It’s when you place your tongue against the ridge of the roof of your mouth. This makes sounds soft. Say the name “Linda.” Notice how much your tongue touches the ridge. It’s a light flick, right?

Now, say the word “leer” or “lean.” Okay, notice there’s more tongue action here and the L sounds “softer” because of the long “ee” sounds after it.

Now, these “soft” sounds are tough for English speakers. Why? Well, because they are not in the English language. You are not used to them.

There are 5 vowel sounds and 10 vowel letters in Russian. They are plain and palatal indicators. Each of them makes the previous letter plain or palatal. See the table below:

Now that we talked about tongues…

3. Gender in the Russian Language 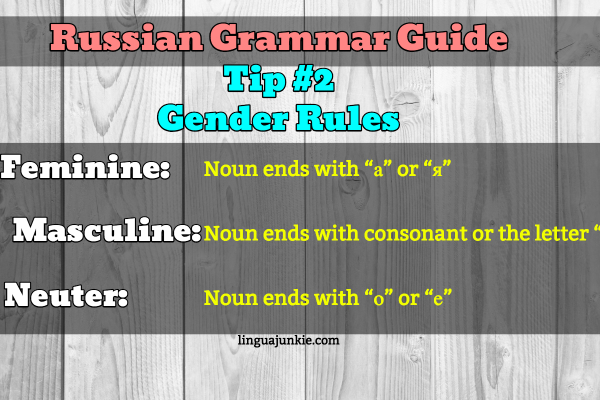 There are 3 gender classes in Russian: Feminine, Masculine and Neuter.

So, every Russian noun has a gender. You may think it’s confusing to remember all the words and their gender, right? But, there are some rules to make your life easier.

If the word ends with soft sign “ь” or the letter – the noun can be either feminine or masculine.

Here are a few examples:

But of course. there are very few exceptions too.

Important tip: Remember that the word for coffee, “Кофе,” is masculine, despite that fact that it ends with the neuter letter “e”.

The next time you want to say “The coffee is good” say “Кофе хороший” (kofe h’oroshiy).

Even native speakers make this mistake. So, if you use this word correctly you are definitely going to impress native Russians.

What’s next in this big, bad Russian grammar guide?

How do you make words plural?

When you want to make a noun plural in English you simply add s, es, or ies.

In Russian you have to change the last letter according to some rules. There are many of them, depending on the grammar case, but for simplicity’s sake, I will describe only how nouns in the Accusative case are formed:

There are 3 main tenses in the Russian language. They are:

The table below gives you a general overview of the Russian tenses and its forms.

Remember, verbs must agree with the other words in the sentence in number and gender. 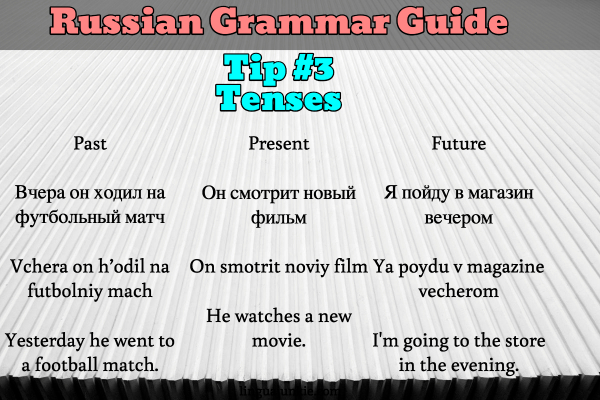 So, The English language uses capitalization more often than in Russian.

Now, in Russian, words begin with a capital letter in 4 cases:

We don’t use capital letters with: 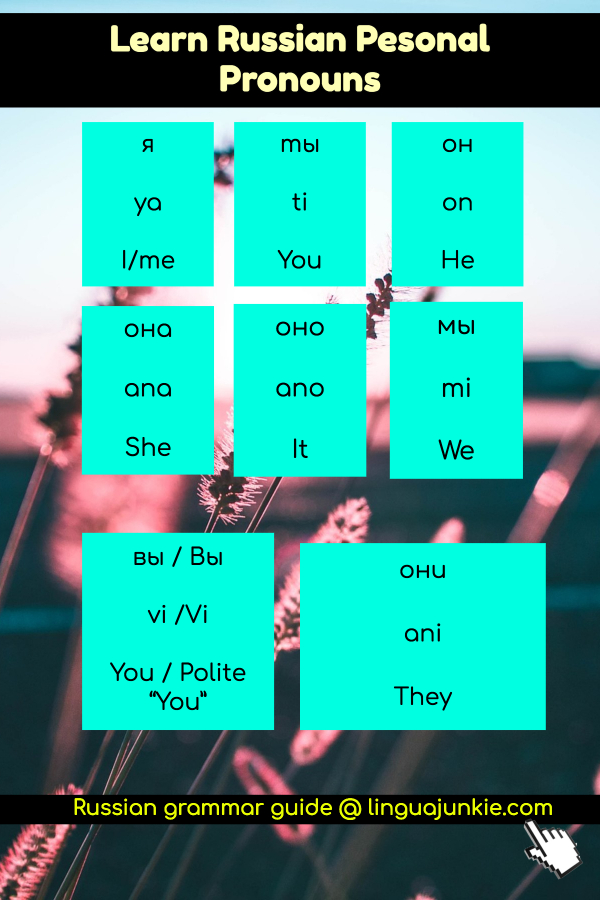 It is always good to know the personal pronouns that are used in the language that you are learning. You can construct new simple and more complicated sentences with their help. So let’s have a look at the basic nominative pronouns in the Russian language:

You can’t learn Russian grammar without knowing how to count from at least from 0 to 10.

Let’s see how we count in Russian.

But, here’s something you should remember. The numerals 1 and 2 have masculine, feminine and neuter forms and you’ll have to learn them by heart. The rest are pretty simple and have only one single form for all genders.

9. The most commonly used Russian prepositions

Russian prepositions are an important part of Russian grammar.

The prepositions play a very significant role in building up new sentences.

We are going to observe only the most commonly used ones, here they are:

You have probably noticed that both “от” and “из” have got the same meaning.

Their meanings are slightly different:

Try and remember this because they are not interchangeable like in English! 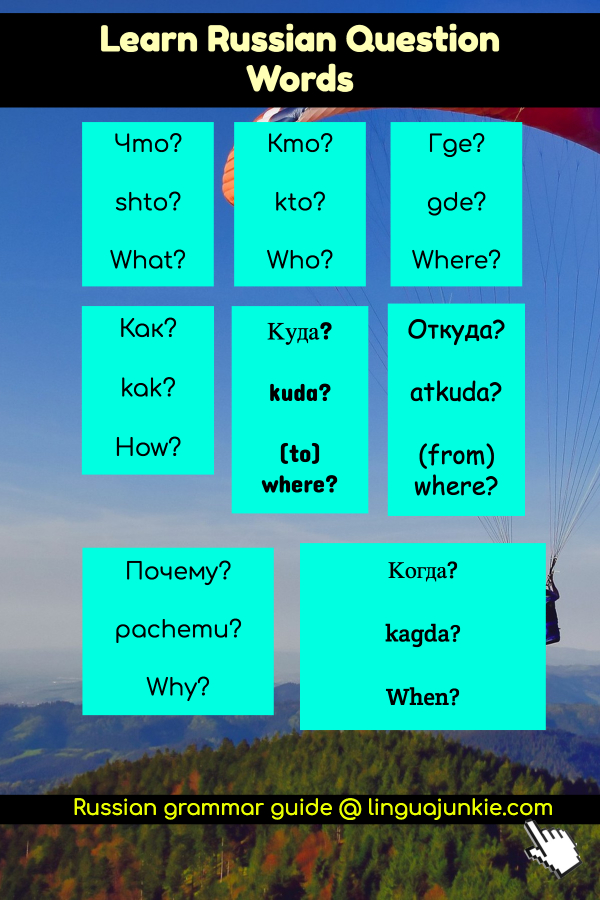 It’s very difficult to construct a question without knowing the Russian question words. We call them “вопросительные слова” (vaprasitel’nye slava) in Russian.

They are presented down below:

You see that some questions are similar to the ones we have in English, but there are also some that might be new to you.

The following examples will help you to understand them better:

Can you see the difference? I’m sure you can now.

And that’s it for this quick Russian grammar guide.

Yes, you’re scratching the surface here but no worries.

Scratch enough and you’ll go deep and get a grip on these rules.

Want to start learning and speaking this language already? Check out my recommendation below or check out these 5 minute ways to learn.

– Written by the main Junkie

Check out RussianPod101, a complete Russian learning program with audio and video lessons, apps, study tools and PDF lesson notes. I think their lessons can and will help you learn and speak Russian to a certain level.