What are the most common Korean greetings?

In this quick Korean guide, you’ll learn 20+ Korean greetings. But above them all, you should just remember “An-nyeong.” What does it mean?

Want to learn how to write in Korean? Download your free Korean Alphabet worksheet here.

This is one of the most important Korean greetings you should know. When you learn this greeting, it’s already enough for them to say “Oh! You speak Korean well!”, haha! This is the formal way of saying hello in Korean to people, especially for elderly people and those you’ve just met for the first time. 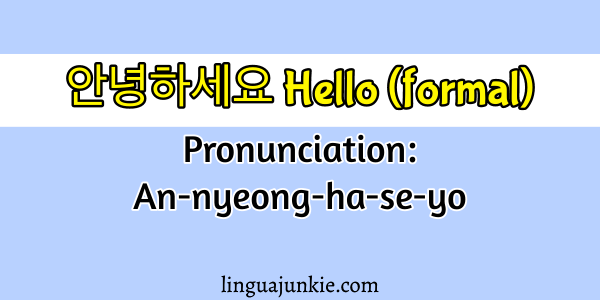 This is the all-around greeting because this can be used regardless of the time of the day, may it be in the morning, afternoon, or evening.

This is the informal form of ‘hello’ in Korean. 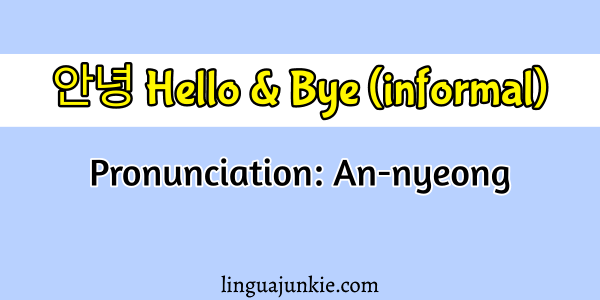 This is usually used between close friends or with people you are really close to. This can also be used on younger people/kids but it’s still much better to use the formal one for the kids that you’ve just met for the first time and also for them to adapt using the formal one.

Important: “An-nyeong” can also be used as an informal way of saying “goodbye”.

There are two ways of saying bye in Korean, and this one is used when you’re the one who’s leaving. When you are leaving the place, you say ‘an-nyeong-hi gye-se-yo’ to the person who’s staying. 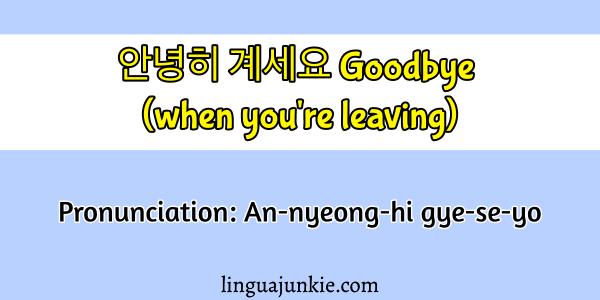 4. 안녕히 가세요 Goodbye (when someone else is leaving)

Meanwhile, this one is used when saying goodbye to someone who’s leaving. This applies to the person staying and telling the person leaving “goodbye”. To understand these two greetings better, it works like this: 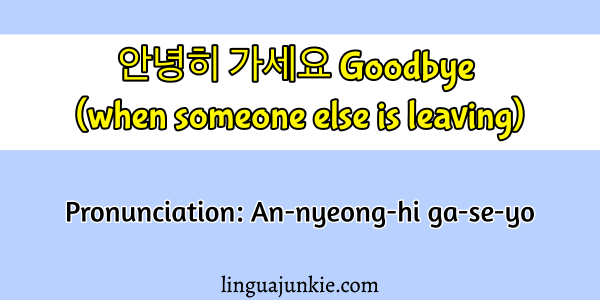 How about Korean birthday greetings?

This is how you say  ‘happy birthday’ in Korean… to someone who’s way much older than you. This basically applies to greeting elderly people. These two are both formal forms and can be used in the same way.

This is another way of greeting someone a ‘happy birthday’ in Korean. While the first one is the most formal way to greet elderly people (refer to no.5), this one is less formal than that. This is used to greet people who are not that much older than you.

This is the informal way of saying happy birthday in Korean. 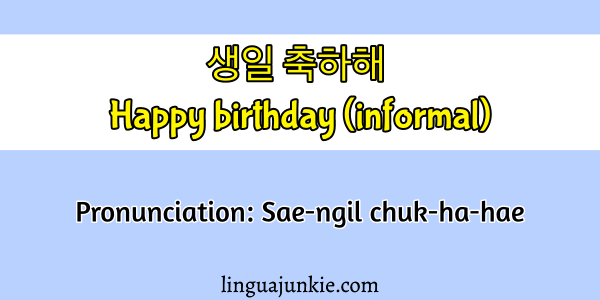 This is mostly used between friends or a group of close people. When you are comfortable with a person with whom you are close, you can simply greet him/her ‘친구 생일 축하해!’ (chin-gu sae-ngil chuk-ha-hae!) which basically translates to ‘Hey friend happy birthday!’.

As you noticed in greeting ‘happy birthday’, it is ‘sae-ngil chuk-ha-ham-ni-da’ which literally translates to ‘Congratulations on your birthday!’. They often use this word ‘축하드립니다/축하합니다’ as congratulating someone for something. This can be used in any occasion like graduation day, wedding, or something that someone achieved or worth congratulating for. This is used to greet elderly people.

This is also a formal way of greeting someone ‘congratulations’ but in a less formal setting.

This is the informal way of congratulating someone. When we are around our close friends, we just usually say ‘hey congrats friend!’ and this is how you say it.

Here’s how you say Merry Christmas in Korean. 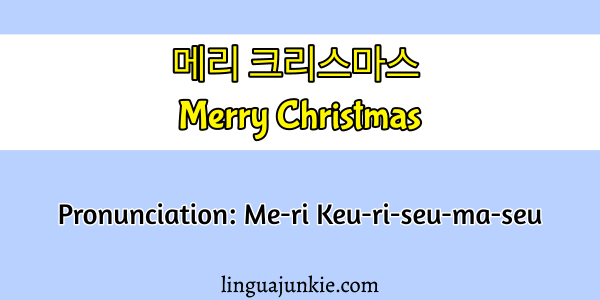 Did it sound so familiar when you tried to pronounce it? Yep, you’re right! This is just basically how everyone greets ‘Merry Christmas’, just in a Korean way, hehe! It is just a borrowed English word, because that’s just how they greet each other in Korea. You can say this to anyone, but just add ‘입니다’ (im-ni-da) to greet the elderly, and ‘요’ (yo) to people who are not that much older than you.

(Example: 메리 크리스마스입니다 or 메리크리스마스요). This is probably the easiest greeting that you can remember.

Here’s how you say Happy New Year in Korean. 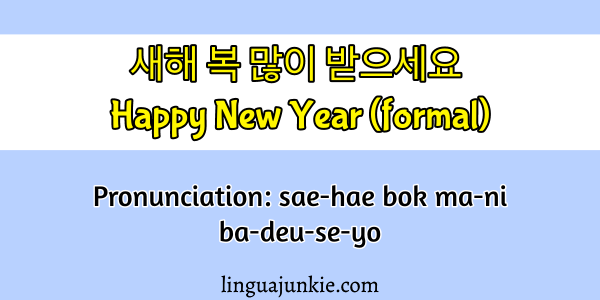 This is a good holiday greeting to know. Hence, it’s on this list of Korean greetings. The phrase literally translates to ‘Have a prosperous/abundant new year!’. You can use this to greet the elderly people and other older people in a formal setting.

This is the informal way of greeting a ‘happy new year’. This can be used on your friends or family members. 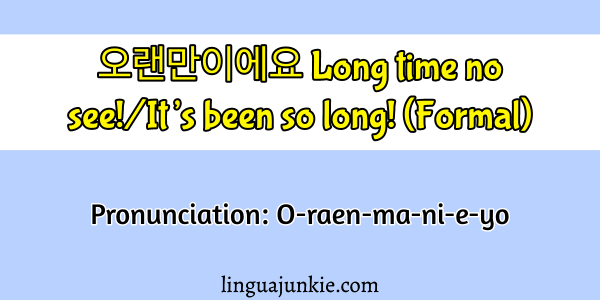 When you meet someone whom you haven’t seen for a long time, you can greet each other with this: ‘오랜만이에요’. It literally means ‘It’s been so long!’. You can use this to greet people who are not much older than you. The less formal way of saying this is ‘오랜만이야’ (o-raen-ma-ni-ya) which is used between close friends.

Aside from the literal meaning of asking someone if he/she had already eaten, this is also the Korean cultural way of saying how are you in Korean.

In Korean history, many people starved to death when Korea was still a poor country. Most especially when it’s winter because there has always been food scarcity. And because of that, they give importance to meals, and this became their cultural way of greeting each other.

Important note: Koreans don’t really greet depending on the time of the day like in other countries greeting with good morning, good afternoon, or good evening. They just use ‘안녕하세요’ (hello; refer to no.1) to greet in any time of the day.

17. 반갑습니다/만나서 반갑습니다 Nice to meet you or Nice meeting you.

When you meet a person for the first time, you can say ‘만나서 반갑습니다’ which translates to ‘Nice to meet you’. You can also just simply say ‘반갑습니다’. This is the formal way of saying ‘nice to meet you’ which you can basically use to elder people and others who are older than you. A less formal way to say this is 만나서 반가워요 (man-na-seo pan-ga-weo-yo) to people who have not much age difference with you.

This is mostly used on people whom you didn’t talk to much. This can be partnered with no.14 (오랜만이에요) when catching up with people you didn’t meet for so long, as like this: “오랜만이에요!!! 잘지냈어요?” which means ‘It’s been so long!!! How have you been?’. And the amazing thing about Korean greetings is that you can just simply answer using the same question! So if someone asked you ‘잘지냈어요?’ then you can just simply answer ‘네, 잘지냈어요.’ which means ‘Yes, I’ve been doing well.” 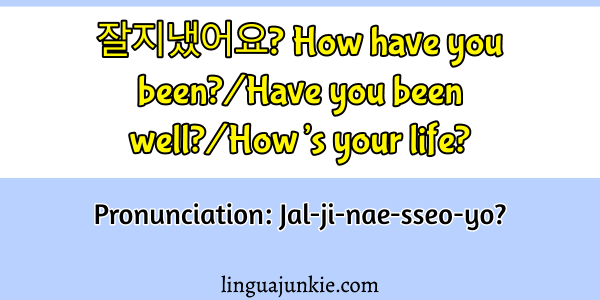 This is the formal way of greeting ‘Welcome!’ in Korean. This is used when you are welcoming someone and are really delighted to see them. You will notice when you see a welcoming banner in Korean, this is the phrase being used.

This is another way of welcoming someone in Korean. But unlike the one in no.19, this one is often used when coming in. You will notice when you go to Korean restaurants or shops or any establishment, they will usually say ‘어서오세요’ as greeting you for coming into their store.

Now, you know the most common Korean greetings.

If you want to remember these phrases, print out this page.

If you have a favorite Korean phrase, leave a comment.

If you want to know how to say some other phrase, leave a comment.

[…] is the first phrase that learners always learn. A super common Korean greeting. This phrase can be used in a generalized setting; elderly, older people, and people you meet for […]