If you’re learning Korean with a Korean program or books and learning all those words and phrases, you will ALSO NEED numbers. Counting in Korean will help you… 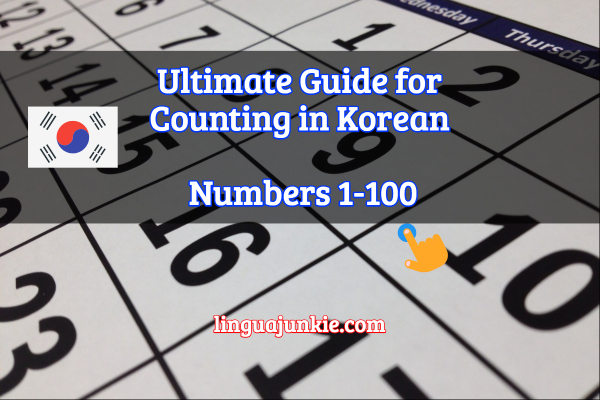 Before we begin, you need to know that there are 2 ways of counting numbers in Korean.  There’s 1) the Sino-Korean system and 2) the Native Korean System.  What’s the difference? The Sino-Korean System is used for:

The Native Korean System is used for:

You need to remember to never mix or combine Sino-Korean system with Native Korean system in when describing a number. Stick to appropriate system! Hey, but don’t worry! It’s not complicated at all!

You should also listen and hear real Korean. Press play below. Try this Free Lesson from KoreanClass101.com (click here to visit).

Here are the basics.

Just like English, once you learn 0-10, the rest is easy.

So, make sure you memorize these. Feel free to print out this page if you have to.

(For saying phone numbers, you should use Sino-Korean numbers.)

(For counting objects, you should use Native-Korean numbers.)

(For counting people, you should use Native-Korean numbers.)

My birthday is June 7th.

(For your birthday, you should use Native-Korean numbers.) 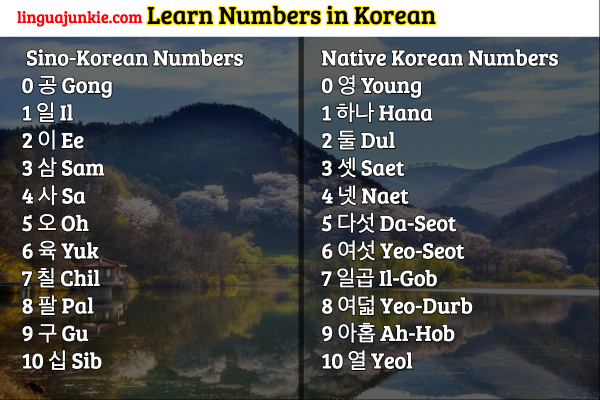 Here are some examples to help you review.

Animals. When counting the number of animals, you should use Native-Korean numbers.

Transportation. When saying the bus, train, flight, ticket numbers, you should use Sino-Korean numbers.

Counting to 100 in Korean

You’ve noticed how simple it is to start counting in Korean, right? Once you get familiar with the patterns and rules, and memorize them, it is easy. You will master in counting any numbers in Korean!

In this part, you learn how to write and pronounce any number up to 100.

So, what’s the rule for counting in Korean to 100? It’s easy. If you want to do any number between 30 and 100, just follow a very similar rule. You know how in English, you take words twenty, thirty, forty and ninety and then add numbers one to nine to make 39 or 99? Same thing.

My ticket number is 98

When saying the time [minutes], you should use Native-Korean numbers.

When saying the number for age, you should use Native-Korean numbers.

Final Part: How to do Math in Korean

Now that you know all about counting in Korean, let’s do some math. You do math in English, right? Let’s do it Korean too!

When doing math, you should use Sino-Korean numbers.

Counting in Korean from 1 to 100 is easy. Be sure to print this tutorial out for later review. It’s always good to review things again and again until they’re stuck in your head.

Did this help? Be sure to leave a comment!

P.S. I recommend this learning program for Korean learners. If you want to learn and speak Korean, try KoreanClass101. You get 1,000s of fun audio/video lessons and study tools that will help you learn fast.

Click here to learn Korean with this Learning Program – KoreanClass101

This helped me a bunch. Thanks ☺☺☺

Hello! This was so helpful, thank you!

Everything was great, but I think you mixed up native- and sino-Korean towards the end (after you have taught how to count to 100, you get us to practice telling the time).

Otherwise, this was awesome!

By the way, not many native Koreans use the Sino-Korean for 18 because it sounds like a curse word with a similar pronunciation to f**k. So, if speaking with it, it’d be better to use the Native Korean.

Thank you for these, it helped a lot. My only comment is that sometimes you say to use sino-korean but you are using native korean in your examples. It’s kind of confusing if we’re trying to memorize it. But all in all, it was helpful. Maybe just edit it. Thank you!

this is helped me a lot, now i can practice on my number