How do you learn it?

What are all those characters really about?

If you’re asking these questions, then you’ll get your answers here. In this simple guide, you’ll learn all about the Japanese alphabet and writing systems. Afterwards, you’ll know what to learn and where to go next. You’ll also get worksheets and tutorials.

To start you off, there are 3 main Japanese writing systems.

And then, there’s also romaji… which isn’t really a native Japanese writing system but is still used a bit in Japan. So, let’s explain them all. 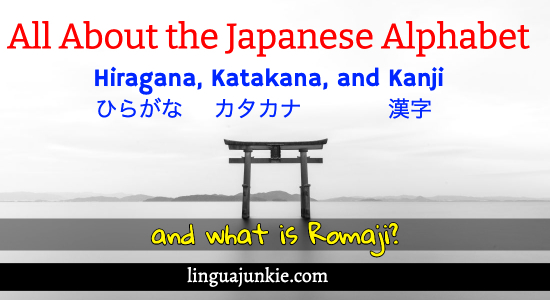 Want to learn how to read and write in Japanese? Get your free Japanese Hiragana/Katakana workbook + 7-Day Writing Course.

Romaji (ローマ字) is a writing system that is a romanization of the Japanese language.

It is basically a way to express Japanese writing using the Latin alphabet. Yes, letters that you’re reading now. Many English words that represent Japanese words like sushi, ramen, ninja, or samurai can be considered romaji.

For example, the following Japanese sentence can turn into romaji:

When is Japanese Romaji used?

Who uses Romaji? It’s commonly used so foreigners can read the train stops and signs. It’s also used as a method for typing Japanese on the computer. In addition, most Japanese language textbooks use romaji to accompany the Japanese characters. This way, the learner doesn’t have to question how the words and sentences sound.

Should you learn Romaji? Technically, you already know romaji, so… no.

Now, let’s move on to the rest of the Japanese writing systems.

Hiragana (平仮名) is a type of Japanese writing system.

How many Hiragana are there? There are 46 “letters” or characters in total. But unlike our alphabet where one letter represents one sound, each Hiragana character or “letter” represents a syllable.

Most characters are a combination of a Japanese consonants and Japanese vowels.

For example, these characters are:

Remember the Ah, Ee, Ooh, Eh, Oh pattern. You’ll see it for all the other characters.

Hiragana is one of the most basic forms of Japanese characters. It was imported from cursive-style Chinese writing in the 9th century. Here are some words that are only written in hiragana:

When is Hiragana used?

Since you’re a learner…

Hiragana is also used in kids’ books and comics to make it easy for them to read.

Otherwise, Hiragana is typically used to fill in the particles of Japanese grammar. It is used to make sentences smoother to read and add nuances to the speech.

What do I mean by that? Well, here. Take the sentence…

In recent times, it’s also often considered a feminine character. Many female names will only be written in hiragana.

When should you learn it?

Hiragana is the first Japanese alphabet that you should learn because it represents all of the Japanese syllables! And it should take you about a week or less to learn all 46 characters. At least, college classes spend up at a week on Hiragana (and Katakana.)

In schools, Japanese children will first learn hiragana so that they can put their words on paper and start reading books. Manga (comics) or books for children are often completely written in hiragana so that it can be read at a young age.

Katakana is another type of Japanese alphabet that represents the Japanese syllables. It’s said that the origin of these characters come from fragmented versions of Chinese characters.

Katakana has the same exact sounds as Hiragana — 46.

Both Hiragana and Katakana are referred to as “kana.”

Now, here are some Katakana examples.

When is Katakana used?

So, what’s the deal with Katakana? Why is there Katakana if you have Hiragana with the same exact sounds?

Well, Hiragana is for Japanese words.

And Katakana is mainly used to express words from other languages. Words like “ice cream” and “ramen.” As you can see in the example words above, all of their word origins come from another language. So with katakana, it’s possible to incorporate foreign words into Japanese. New words in katakana are constantly added and created from other languages!

Also, if you were to translate your name into Japanese, you’d have to write it in Katakana.

Katakana is also used to write onomatopeia, scientific terms, and you may also see it in advertising — to catch attention.

When should you learn it?

It’s best to learn katakana, once you know hiragana. Hiragana and katakana both represent the Japanese syllables, so it should be relatively easy to learn.

Once you know katakana you can start to use any kind of borrowed word from a foreign language. Borrowed words make up almost one fifth of common speech in Japanese.

Difference Between Hiragana and Katakana

So, you’re wondering why learn 2 different things if they mean the same? Well…

The difference between Hiragana and Katakana is…

Now, to help you tell the difference between Hiragana and Katakana…  they differ in terms of looks.

So now, you know the difference between hiragana and katakana.

How Long Does it Take to Learn Hiragana & Katakana?

How long to learn Hiragana and Katakana?

In most college classes, students learn the 2 Japanese writing systems in the first week. So, a week.

Could you learn them any faster? Yes, but as with all learning, in order to retain, you need to immediately use what you learn. So, if you memorize all the characters in 1 hour but don’t practice them, you’ll forget them just as quickly.

Chinese characters called hanzi were adopted into Japanese writing to represent different words in Japanese. This is one of the most beautiful ways of using characters in the Japanese language. These characters usually represent objects, verbs, adjectives, or adverbs. They can be symbolic and depict the image of what it represents.

Here are some examples of kanji:

When to use Kanji?

So, when do you use Kanji?

Kanji is used so that sentences are easier to read. It’s possible to write all sentences in hiragana or katakana. Remember… in Japanese writing, there are no spaces to separate the words in the sentence. This can make it difficult to differentiate the nouns, verbs, or other grammatical parts. Kanji can solve this problem by grouping the words together and adding structure to the sentence.

When should you learn Kanji?

It’s best to start learning kanji as soon as you learn hiragana and katakana.

Once you start to learn kanji you will realize that it is a long process to learn all of them. In order to read Japanese fluently, you will need to know at least 2,000 kanji! Although it’s difficult to learn many characters, each kanji represents a word or part of a word so it is similar to learning vocabulary.

And don’t worry, if that sounds like a lot… even Japanese people struggle with Kanji.

How do the Japanese people learn Kanji? They learn in grade school and pick up hundreds of kanji per  year. So because they’re using Kanji all the time, they learn it all through every day practice.

Now you know that there are 3 official Japanese writing systems.

And then, there’s romaji — or latin letters (like this) — used to write Japanese words.

7 thoughts on “Japanese Alphabet: An Easy Guide for Beginners”