Want to learn about Japanese consonants?

And how do you pronounce them properly? Well, in this quick guide, you’ll learn all about Japanese consonants in the next 3 to 5 minutes. This guide is spilt up into… 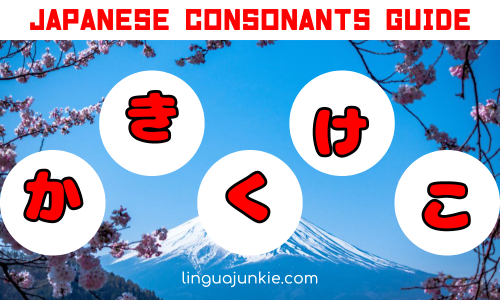 Japanese consonants are unique from other languages because they are tied together with Japanese vowels. This means that for most situations, you’ll only need to memorize the pronunciations based on the consonant-vowel pair.

For example, take these 5 hiragana characters.

And Japanese pronunciation is much easier than the English language because the consonant sounds usually follow the same pattern.

So, let’s take a look at the pronunciation of Japanese combinations… with this sweet, sweet consonant chart.

The consonant chart below organizes hiragana characters by the type of consonant sound (left column) and vowel (top row) pair.

This will help you master the consonant sounds and patterns.

Unlike in the standard hiragana chart you’ll see in most Japanese alphabet guides, the voicing symbols like the two dashes (゛) and circle ( ゜) are added to show the range of consonants. The special consonants that mostly occur in borrowed words are not included here.

Want to learn how to write  the Japanese alphabet? Download your free Japanese Alphabet worksheet here.

Now, let’s talk about the “types” of Japanese consonants.

In Japanese, “p” consonants are special because a circle, ゜ is added to the hiragana character of an “h” consonant. For example, は (ha) becomes ぱ (pa) when the circle is added. This is called a 半濁点 (handakuten).

Here are some examples of voiceless consonant words in Japanese:

Now, aside from Japanese voiceless consonants, we have…

It’s actually also possible to convert a voiceless consonant to a voiced consonant by using the symbol:  ゛. This is called a 濁点 (dakuten).  For example, an “h” consonant character like ほ (ho) will become ぼ (bo) with the dakuten. This is possible for certain “k”, “s”, “f”, “h”, “hy”, and “t” consonants.

Here are some examples of voiced consonant words in Japanese:

The hiragana ん (n or nn) is a unique voiced consonant because it is the only one that doesn’t have a vowel after it. It can either end a word or be followed by another consonant.

Here are some example of ん (n) words:

Now, what are Japanese double consonants?

Double consonants are defined by having two of the same consonant sounds together. In English this would be words like “tunnel” or “apple”. In these cases the consonant sound isn’t affected too much by the doubling of the letters.

For double consonants in Japanese, the effects are more noticeable. You must stop the sound a bit in between the consonants. Learning this pronunciation can take a bit of practice and listening to native speakers.

When you want to create a double consonant, a small っ (tsu) is placed before the double consonant. For example, in a word like がっこう (gakkou), the “kk” is preceded by a small っ(tsu). This is called sokuon and has nothing to do with the hiragana big つ (tsu) sound.

Here are some examples of sokuon words:

Now you should know the basics of Japanese consonants and Japanese pronunciation.

And at this point, you likely know the whole Japanese alphabet too.

Leave me a comment and let me know if I answered all of your questions and confusions.