In this comprehensive guide, you’ll learn a bit about grammar, vocab and the unique points of Biblical Hebrew. Sounds good? Good.

Biblical Hebrew Lessons – A Guide to this “Ancient” Language 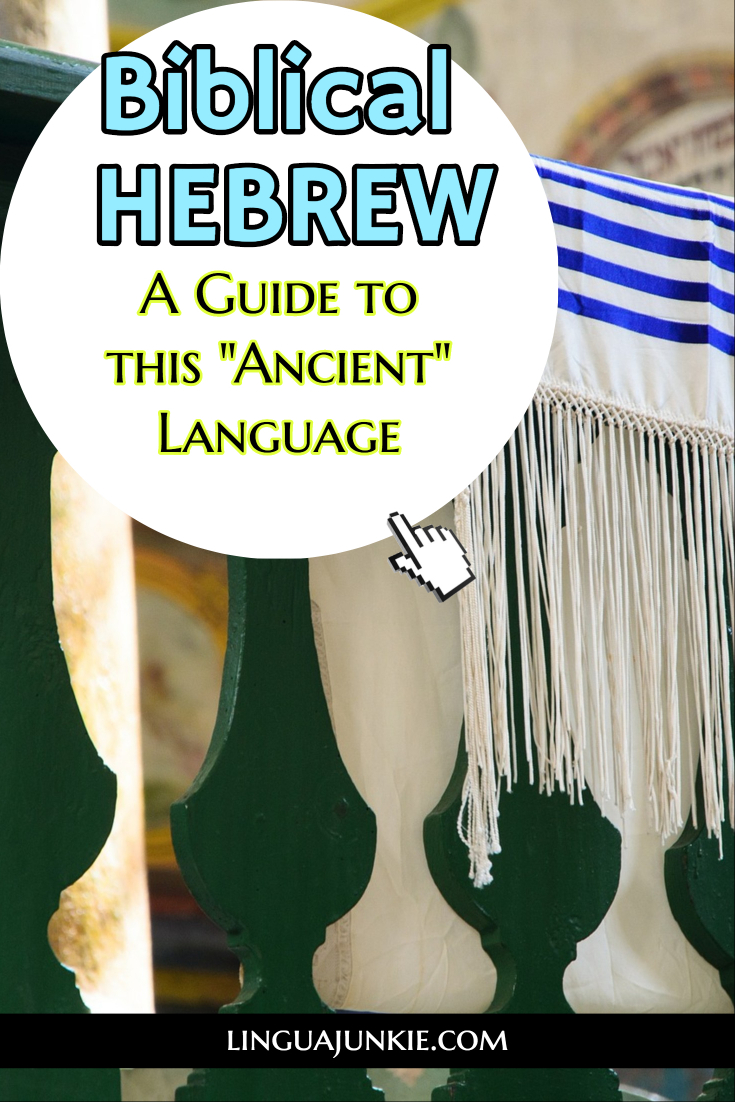 If you want to learn and speak Hebrew…

May I suggest a Hebrew learning program? It’s called HebrewPod101.com. If you’ve always wanted to speak the language, you can and will with their Audio/Video lessons by Hebrew teachers. You get over 500+ lessons, tons of apps, study tools and PDF eBooks. Click here to get a free lifetime account.

1. What is Biblical Hebrew, you ask?

Biblical Hebrew (or classical Hebrew) is the language of the Old Testament of the Bible and the archaic form of Modern Hebrew.

How old is it?

The earliest archeological records show that Biblical Hebrew was used for writing and speaking from around 1300 B. C. until 300 B. C. For many decades after, it only existed in the Bible and in the texts explaining it.

People mostly used it for prayer and for reading the Old Testament of the Bible.

So if you know Modern Hebrew you can easily read any Biblical text.

But, it would be much more difficult for you to understand it. In order to do this, it is necessary to learn all the peculiarities of Biblical Hebrew, like grammar, vocabulary and syntax.

Learning Biblical Hebrew will help you read the Bible (“Tanakh”) in its original form.

You can read their translated versions, but, unfortunately, it is impossible to transfer all the details and peculiarities in translation.

Let’s move on to the next Biblical Hebrew lessons.

2. So, what’s the difference between Biblical and Modern Hebrew?

Modern Hebrew has been modified to suit the needs of modern life. A ton of new words and terms were created to name new things that didn’t exist 3,000 years ago.

For example, words like: computer, bicycle, car, telephone, molecule and so on.

Biblical Hebrew uses words that have more specific theological meanings and are either no longer used, or have a new, more “modern” meaning.

There are only about 8,000 words in the Bible. It is clear that in the spoken and written language of that period, there were much more words, however they were not used in the Bible. The biblical vocabulary, though limited, is the most important basis for the new Hebrew vocabulary.

In other words, if you want to learn Biblical Hebrew, you should focus on the words!

So, what about Biblical Hebrew grammar and modern grammar?

There are three tenses in Modern and in Biblical Hebrew. The Past, Future and Present. But, they are formed according to different rules.

Biblical Hebrew tends to have many composite and blended words that consist of 2 and more words. For example:

Unlike Modern Hebrew where the Subject comes first, in Biblical Hebrew the verbal predicate is often followed by the subject.

Here are some examples of words that are different in Modern and in ancient Hebrew:

Let’s move on to some more Biblical Hebrew lessons.

However Biblical Hebrew is also learned in some cases:

Let’s do just that.

Most words in Biblical Hebrew are formed from a three-consonant root or a derived verbal stem that is used to express grammatical voice.

The numerals are often positioned ascendingly, for example:

A verb that stands before two subjects corresponds to the first subject in gender and number.

The use of singular with plural words, for instance:

– Possessive pronouns and nouns are very often combined into one word like in the following examples:

Questions in Biblical Hebrew usually begin with the questioning “ה.“

Here are a few examples:

Biblical verbs in the past tense usually begin with the letters “וי“, like in the following examples:

While Biblical verbs in the future tense usually begin with the letter “ו“:

And there you go!

i hope you enjoyed the Biblical Hebrew Lessons in this article.

P.S. Done with reading articles and want to learn Hebrew for real?

Okay! I recommend HebrewPod101.com — an online learning program with audio/video lessons made by real teachers. You can learn to speak, read and write, AND take your lessons on any device.