Ah, finding out what your name is in French is magical, isn’t it?

It’s the rite of passage for any new learner.

The second you start learning the language, you want to know how to write and say your name in. 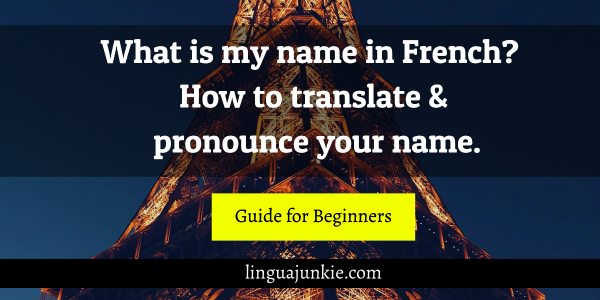 Want to know what your name is in French?

By the way,  you should also hear REAL French. So, here’s a free French audio lesson. Press play and learn how to introduce yourself. 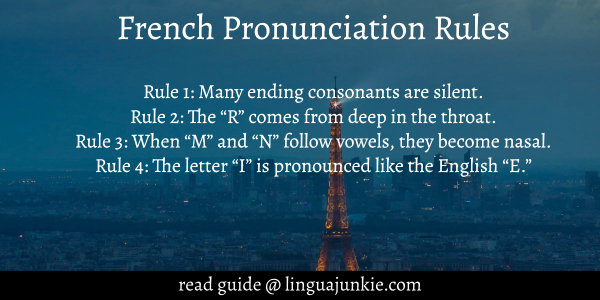 “What’s my name in French? How will it sound like?”

When learning to say your name in French, pronunciation is extremely important. So, here are some rules to help:

Rule 1: Many ending consonants are silent.

The sound of the French “R” doesn’t exist in English. To pronounce it, form your mouth as if you are going to use the “K” sound. Blow air from the back of your throat. It is as if you are gargling water or trying to clear your throat.

Any vowel followed by an “M” or an “N” creates a nasal sound. Air has to pass through both the nose and the mouth (as opposed to using just the mouth.)

Rule 4: The letter “I” is pronounced like the English “E.”

Anytime you see the letter “I”, treat it like an “E” when you pronounce it. Some English names already use this pronunciation rule such as Ian (EE-IN) or Nadine (NAH-DEEN).

“I’m lazy. Just tell me what’s my name in French.”

If you want to know your name equivalent and how to pronounce it in French, refer to this chart:

Part 3: How to Introduce Yourself in French 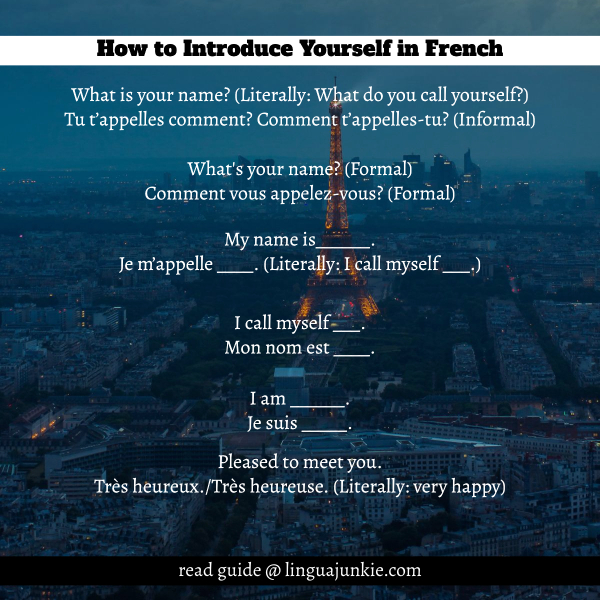 Once you know how to say your name in French, you will need to know how to properly introduce yourself in French to other people. Here are some different ways to do so:

A) What’s your name in French (informal)

This informal question would be used among people of the same age group. Children would use this when meeting other children their own age.

B) What’s your name in French (formal)

This is the more polite version. When adults meet each other for the first time, this would be the proper form to use.

D) I call myself… in French.

When someone asks you, “Tu t’appelles comment?” or “Comment vous appelez-vous?” they are saying “What do you call yourself?” using the reflexive verb, s’appeler. It makes sense to respond with “Je m’appelle” (I call myself) as it uses the same reflexive verb.

E) My name is… in French

This is the literal “My name is” response. It is acceptable to use for any occasion, but is less common than “Je m’appelle.”

F) Pleased to meet you in French

“Je suis” (I am) is also acceptable to use for any introduction, but it is less common than “Je m’appelle.” This phrase is also used to introduce professions or adjectives, such as, “Je suis professeur” (I am a teacher) or “Je suis timide” (I am shy.)

Take a look at this sample conversation between two teenagers meeting for the first time:

*Salut (SAH-LOO) is an informal way of saying “Hi.” It is often used by younger people.

**Et toi (AY-TWA) means “and you.” It is commonly used when asking a question of someone else after they have posed the same question. It uses the informal you, toi.

Here is a conversation between two adults meeting for the first time:

*Bonjour (BOHN-JHOR) is a more formal way of saying hello or good day. It is used by adults meeting for the first time.

**Et vous (AY-VOO) means “and you.” It is the formal you-form, so it is used by people who are showing respect for one another or by adults who do not know each other well. It is often used when asking a question of someone else after they have posed the same question.

Now you know how to say your name in French.

Now, introduce yourself in French in the comments below.

1 thought on “What is my name in French? How to translate your name.”