Looking to learn some beautiful French words? You got it.

The Main Lingua Junkie will go ahead put some in your brain.

Beautiful French words like… “licking windows,” “occupying yourself with onions,” and much more. So, keep reading on below.

By the way, if you want to hear real French while you read this, go ahead and play the audio lesson below. You’ll learn some basic French greetings in 3 minutes.

Now, onto the beautiful French words.

You can’t learn beautiful French words without learning how to say beautiful in French. It’s beau (m) or belle (f) depending on the gender of the noun you want to describe as beautiful. 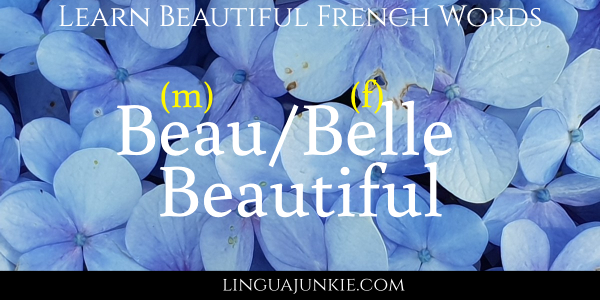 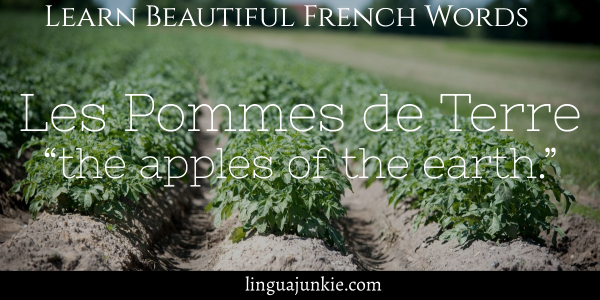 It’s optimistic that the French see these brown, dirty spuds and choose to equate them with bright, juicy apples.

“The mouth made of wood” is an interesting French expression that means “a hangover.” Anyone who has consumed too much alcohol might have experienced la gueule de bois, which can include a dry mouth that might feel like it’s made of wood as well as other symptoms like a headache and nausea. 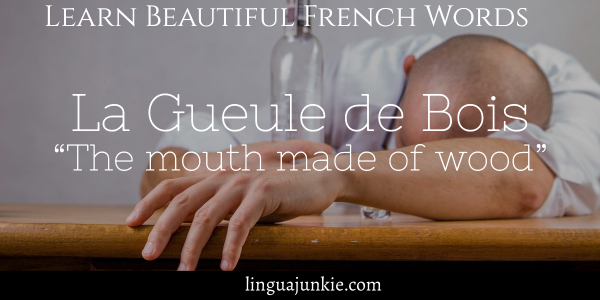 La gueule can also refer to the face of an animal, so this could also be a hangover in which you wake up and look in the mirror only to see an animal-like reflection that looks like it has been set in wood. It is not a very flattering look.

Les fruits de mer translates to “the fruits of the sea.” In English, we use the generic term “seafood,” but les fruits de mer paints a much richer picture of lobsters, clams, scallops, and mussels growing in abundance in an underwater wonderland. The fruit label implies a freshness and a tastiness that makes mouths water. 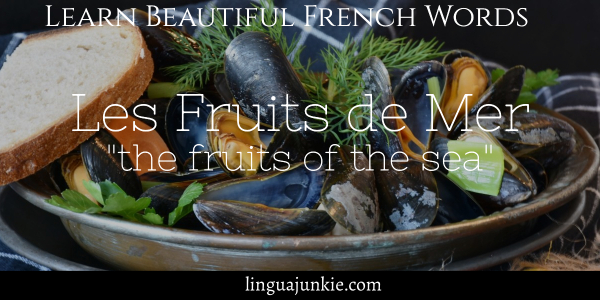 It is no surprise that the French love their wine, so it also isn’t surprising that wine terms sneak their way into daily vocabulary in unique ways. L’embouteillage is the act of bottling wine. Putting wine into la bouteille (the bottle) is done at vineyards across France. 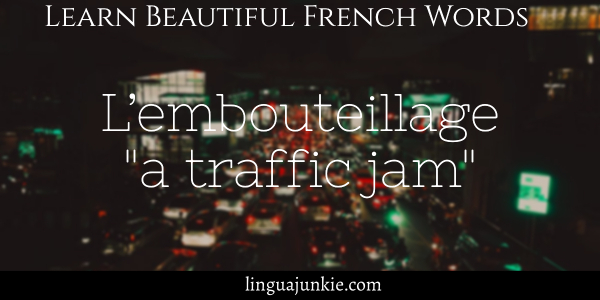 However, in day-to-day life, a French driver might come across l’embouteillage on their commute to work. In this case, it means “a traffic jam.” It is as if all of the cars are trying to fit into one wine bottle at once.

From the word for country, le pays, this term is about being outside of your native surroundings. Le dépaysement occurs when someone is out of their normal area and feels out of place. They might experience culture shock or disorientation as they deal with new norms and different cultural expectations. 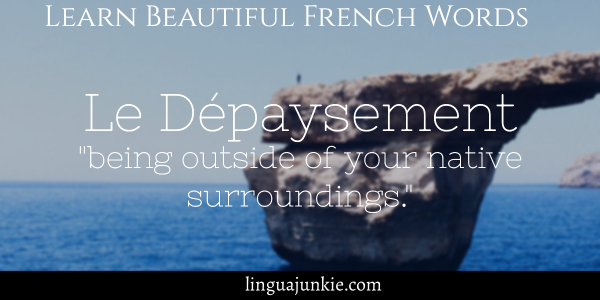 In English, we don’t have a term for this exact feeling to represent how it would feel to leave our country. The closest idiom to represent this idea might be to feel like a fish out of water.

With all of the beautiful boutiques and shops in France, it is no wonder that faire du lèche-vitrines is a popular pastime of its citizens. This term means to go window shopping. You can easily picture French people passing by the windows of pastry shops to glance at tempting tarts and staring at haute-couture clothing stores to see what new collections are on display. 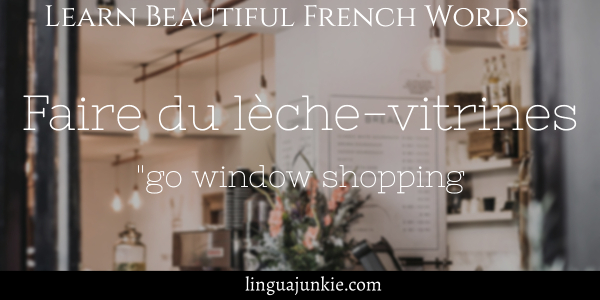 This unique phrase uses the term lèche, which is a form of the verb “to lick.” Although the French are definitely not licking the windows, they might be drooling over the items they wish they could purchase that are on display in the windows.

Flâner is a very calming word with a relaxing tone. It means to wander without a real purpose. It is also used to indicate that someone is just lazing around doing nothing. On a Sunday afternoon in Paris, it is common to see people who prefer to flâner all day. They stroll around neighborhoods and parks with no real agenda and no ultimate goal. 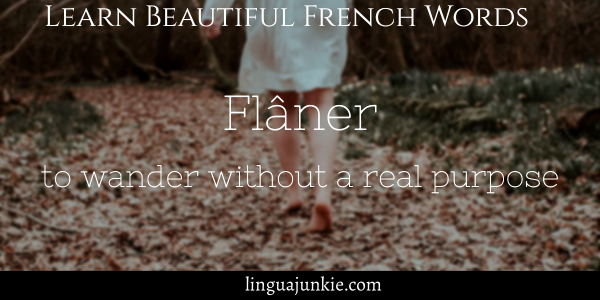 Tomber dans les pommes literally means “to fall in the apples.” This term is used to describe someone fainting, even if they aren’t landing on a bunch of apples. If someone sees the sight of blood, they might tomber dans les pommes. This expression is used in more of a familiar fashion. The verb used to technically indicate “to faint” is s’évanouir. 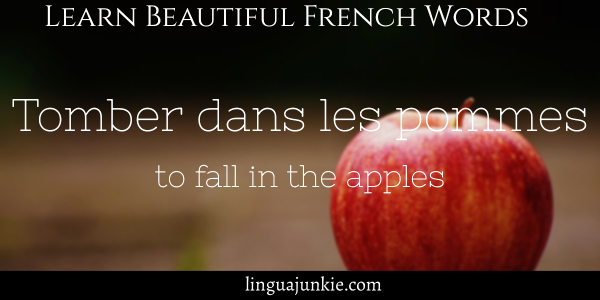 S’occuper de ses oignons literally means “Occupy yourself with your own onions.”

If a farmer was trying to tell you how to grow your onions, you would tell them to just take care of their own onions.

In this way, the modern-day translation of this expression now means “to mind your own business.” When a French person gives their opinions on matters that are not any of their business, a common response would be to tell them s’occuper de ses oignons and mind their own business. 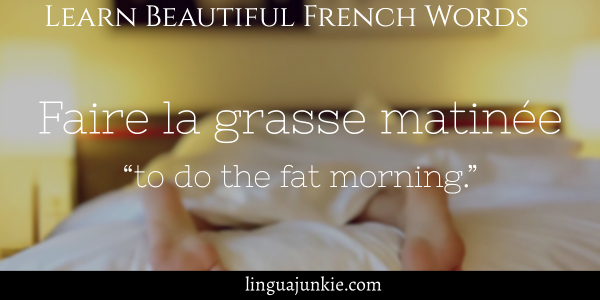 If you want to sleep in and spend hours staying in your bed, then you are choosing to faire la grasse matinée.

Avoir le cafard literally means “to have the cockroach.”

It is an interesting expression that is most often used to describe someone who is “feeling depressed” or “down in the dumps.” It sounds like a very soft, gentle phrase until you learn that a cafard is a cockroach. This definitely gives it a creepier and more negative sense. 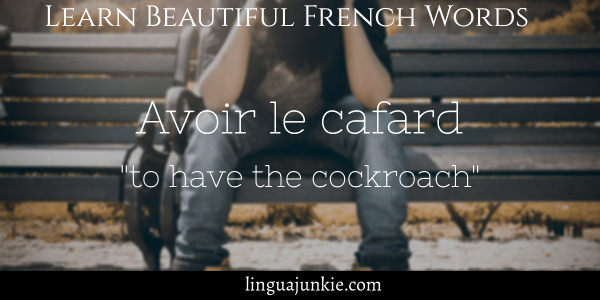 Now you know some beautiful French words and expressions.

Also, if you want to learn and speak even more French, here’s another 3-minute French audio lesson that’ll teach you how to say “thank you” in French.