If you’re wondering…”how to spell my name in Spanish?”

Or… “what’s my name in Spanish letters?” Well, don’t worry.

This quick guide will tell you how to say your name in Spanish. So of course, you’ll naturally learn a little bit of Spanish pronunciation too, okay? So….

By the way,  you should also hear REAL Spanish. So, here’s a free Spanish audio lesson. Press play and learn how to introduce yourself. 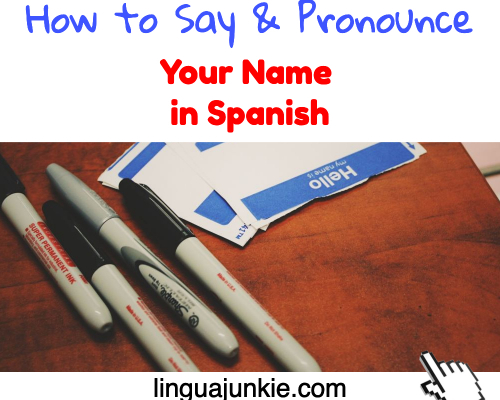 To say your name in Spanish, first let’s brush up on 5 Spanish pronunciation rules. Knowing these will help you say the name correctly.

Rule 1: The Spanish R is trilled

The “double R” is produced by trilling the tip of your tongue against the alveolar ridge. You can find this area on the roof of your mouth, behind your front teeth. The “single R” is similar to the “tt” in “better.” However, a single R at the beginning of a word sounds like a double R:

Rule 2: The U is not pronounced in the letter combination GUE and GUI

When you see these letter combinations you need to be careful not to pronounce the U:

Rule 3: The letter combination “LL” is pronounced like the English “Y”

When you see a “double L” in a Spanish word, you need to pronounce it like the “Y” in “yes.”

Rule 5: Spanish accent marks indicate that that syllable is stressed

You may find Spanish accents, or “tildes,” over vowels. This indicates that that syllable is stressed in the word.

Rule 6: The letter H is silent

“H” is always silent in Spanish. It is only pronounced in words that are adopted from foreign languages.
Example: Hilaria (EEH-LAH-REE-AH)

Now that you know a few rules, let’s get to the actual names.

Here are some English names translated to Spanish.

Refer to this chart if you want to know your name equivalent in Spanish. Be sure to learn the right pronunciation. If your name is missing, leave a comment and we’ll add it.

Part 3: How Introduce Yourself in Spanish

Now that you know how to say  your name, let’s learn how to introduce yourself in Spanish.

Let’s do both formal and informal. First of all, you must know that there are two forms for “YOU” in Spanish: “TU” and “USTED.”

The pronoun TU is omitted in this question. However, the reflexive verb “llamarse” is conjugated accordingly.

Please note the “upside-down” question mark (¿). You must know that this is used at the beginning of every question in Spanish.

Again, here’s that helpful audio lesson. If you haven’t done so already, listen to it – press the play button. You will hear the native pronunciation and English explanations.

The pronoun USTED is omitted in this question. However, the reflexive verb “llamarse” is conjugated accordingly.

3) I call myself… in Spanish

The literal translation of the reflexive verb “llamarse” is “to call oneself.” Note how the verb is conjugated differently depending on whether you use TU (informal) or USTED (formal). Now let’s see how you conjugate it with “YO” (I), when you want to respond to that question.

The pronoun YO is omitted.

You can also use this alternative to introduce yourself, which literally means: “I am…”

This is a very formal way to introduce yourself:

If you want to let the other person know that it is very nice to meet them, you can say:

Now, you don’t have to wonder what your name is in Spanish.

You learned some basic pronunciation rules.

And you how how to introduce yourself.

Now, introduce yourself in Spanish in the comments below.

1 thought on “What’s my name in Spanish? How to say your name FLUENTLY.”