I’m going to show you 1) why people fail at language goals and 2) how you get can succeed. Yes, that means New Year’s Resolutions. But before you go cringe and cry that “they don’t work, Junkie,” let me ask you this….

Do you know why the common person cringes at New Year’s resolutions?

Because they tried. And they failed.

And people around them failed.

And now they’re all bitter at “New Year’s Resolutions.”

…instead of blaming themselves and improving. 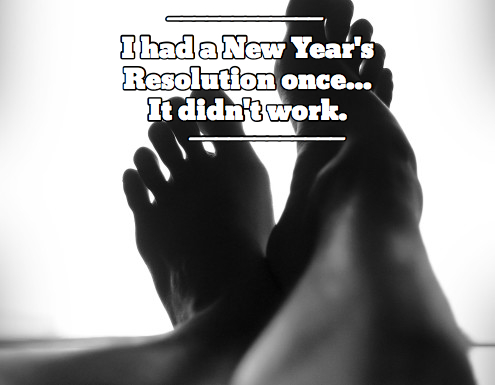 So, New Year’s Resolutions are a joke among cynical people that can’t get things done. Like, goals such as language learning, fitness or learning any skill. To them, getting things done now means trivial things like…

1. Cleaning their apartment (Oh, you poor thing, that was tough.)

2. Buying a plane ticket (I feel your pain.)

1) So, why do people fail at New Year’s Resolutions and goals in general?

Ooh, boy. I’m about to open a can of kick-butt on you.

Think about the average person. They set a goal.

“I want to learn Japanese… or go to the gym.”

What do they usually do next after deciding on a goal?

a) They buy things first.

Like a textbook or a gym membership. Surely you need these for your goals, right? Buying something feels like an investment and feels like you’re committed now that you’ve spent cash.

One month later, that book ends up under your bed. And the gym goes from a Wrestlemania Royal Rumble event back down to the 5-10 consistent people that have been there since 2 years ago. 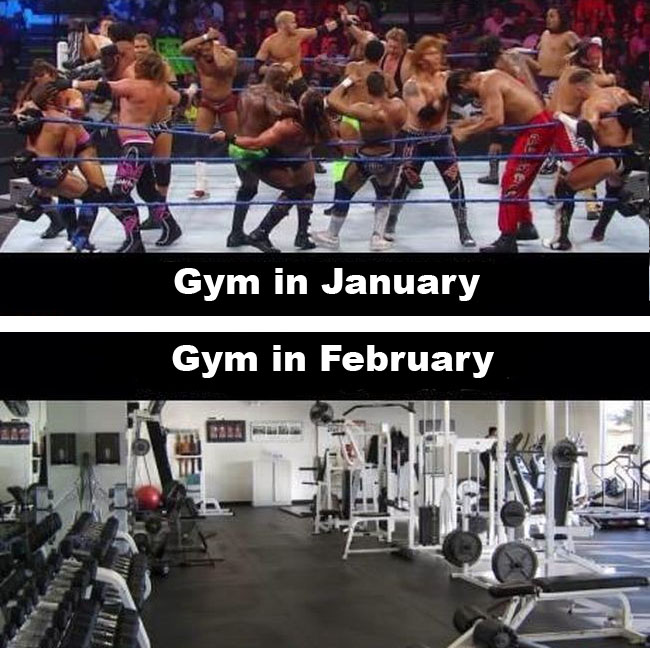 What happened? You made a purchase! You were invested! You were committed!

Why do people stop pursuing these passions that they swore they wanted to do?

That they tweeted about? Facebooked and Instagrammed about?

These passions that could change their lives forever?

b) They have no habit or consistency.

What’d you do all of last year? I bet you that you weren’t learning a language every day of last year. You have no habit or consistency for it. So what makes you think that you can suddenly sit down and learn for 1 hour a day this year?

Maybe if you are from a poor country, you have a NEED and the work-ethic to get it done.

But most people don’t really have such “needs.”

What you’ve done in the past – your daily habits, daily activities and such – dictates what you’ll do in the future. Past behavior dictates future behavior. If someone was drinking a ton of beer last year, what do you think they’ll do this year? More beer. If someone went to the gym all of last year, what do you think they’ll be doing this year? More gym. They have a habit of doing these things. They’ve developed consistency.

They don’t need a stinkin’ New Year’s to tell them when to start. And average people rely on the New Year.

The hope that suddenly it will all suddenly change.

Which brings me to my next point.

c) The New Year is their motivation.

To start fresh. To start anew. To finally change themselves forever. How exciting! And then, they fail. Why? See point b above. Sure, January 1st, as any new day, is a new opportunity to grow. But, if you’re waiting for the New Year… just because it’s the New Year… to start on goals, you’re really setting yourself up for failure.

If you cared enough, you’d start much earlier. New Year’s Eve and New Year’s Day are no different than any other day – except –  we apply meaning to them. Woo, Party!! Then we realize that by January 2nd and 3rd, the party is over. The ball has dropped.

No more messages of world-peace from TV news anchors. Things are back to normal.

And we quit goals. Back to reality. What a scam!

d) They rely on “motivation” in general.

What’s motivation? Motivation is a word used to describe what people “have” when they do things and get them done. And it’s mostly used by people that don’t get things done. “Ooh, look at him, he has motivation!” So, the average Joe starts thinking…

“Hmm, I need to get some motivation. Otherwise, I won’t be able to learn Spanish.”

If you don’t have this magical thing called motivation, you can’t learn? It stands between you and learning 1 simple word. The word and the meaning are there in front of you. But you can’t do it because you have no motivation. An invisible force that stops you.

So, when most people first start, they feel excited! They think that’s motivation. Yes! Feels good. Then, that excitement passes and they’re bored. Suddenly, their goal of “being fluent in Japanese” is tough and it feels like work. They quit.

e) Their goals suck. “Be fluent in Japanese.” “Speak French.” “Learn Chinese.” I mean, yeah, that’s nice of you to aim for the stars, but you won’t be fluent in 12 months unless you’re an autistic savant. These goals are very big and very vague. You spent all of last year doing nothing and NOW you want to become fluent?

So when you realize just how much work is needed go from zero to fluency, you quit as most normal people do.

For more reasons why people fail, you can read my other article here.

2. Let’s talk about how you can succeed at learning language.

Alright, if you’ve made it this far, let’s get some things straight if you want your goals to work.

You’re not learning a language because – ooh, it’s the New Year!! New me!! – but because you have interest in it. Right? Good. The earlier you start, the more likely you’ll succeed. Why? Starting early means more progress. Starting early means you’re building your habit early.

So, not only does your language improve, your ability to sit down and learn – or your habit & consistency muscles get stronger.

Everyone wishes they started earlier. 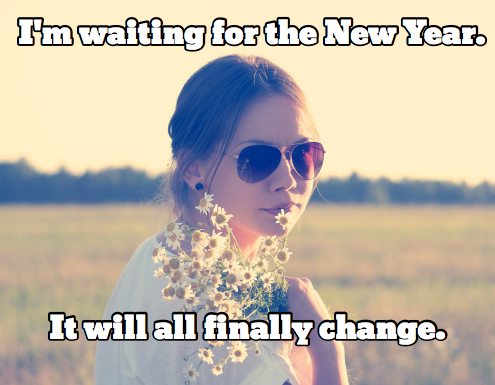 The fastest way to build habit & consistency is frequency. Or, doing it as much as possible.

The more you do it, the more it sticks.

Stop reading my article. Learn a language. And do it tomorrow. And don’t stop.

“Fluency” is a big, vague word. Aim smaller to make your goals easily reachable. For example, try monthly goals like…

All of these are doable within a month. And best of all, you’ll know when you’ve achieved them. Either you know all 300 phrases by January 31st, or you don’t.

Once you hit these simple goals, you’ll want to make more progress and keep going.

Here’s another angle. It’s 6AM. You wake up. You’re sleepy and cranky. You need to go to school or work.

Your brain wishes you could sleep more.

Your nose is stuffed.

But you go anyway. You have to.

Then, at school or work, you get things done. The day is over and you repeat. And in the meantime, whatever you’re working on at school or at work, gets better and better. You’re putting in effort, day after day.

Simply because you do this stuff every day. Now imagine if you had this same process with learning language. Do it, and do it regardless of how you feel. Make it automatic.

Rule #5 – Stop thinking. Do it regardless of how you feel. Don’t rely on Motivation. 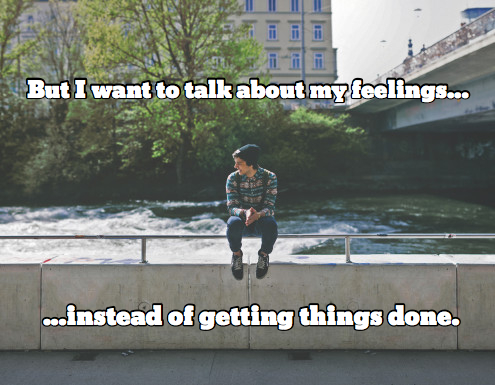 You don’t think about going to work. You get up and go.

You don’t think about going to school. You get on the bus and go.

Similarly, don’t think about “ohhh, I’ll have to learn language today.” Stop thinking about it and do it automatically. That’s the goal.

And if you are thinking “oh, this is going to suck,” you’re definitely not helping yourself. Negativity, in no shape or form, helps you with goals. It’s an added weight or burden to you getting things done. You’re adding 10 extra pounds of unnecessary emotion to an already heavy goal.

Stop thinking. Sit down and learn. Or quit.

The same thing goes for feelings.

When you first start, you feel excited! Motivated! Don’t rely on motivation. It’s a scam.

Otherwise, you’re creating an invisible barrier between you and your goal by saying you need motivation. That you need this magical thing to get going.

Can you? Of course. Stop thinking that “you need” something in order to “do something.”

Do you really need motivation? No!

That excitement passes in a week and everything will start feeling like work.

But if you can put those feelings aside, and do it anyway, you’re much more likely to succeed. And even better, if you can start enjoying the process, (ask any gym rat about how much they love gym), you’re guaranteed success.

Leave a comment and let me know what your goals are.

But, actually, I’d rather you go and put effort into your goals instead.