So, you learned a few Korean words and phrases… 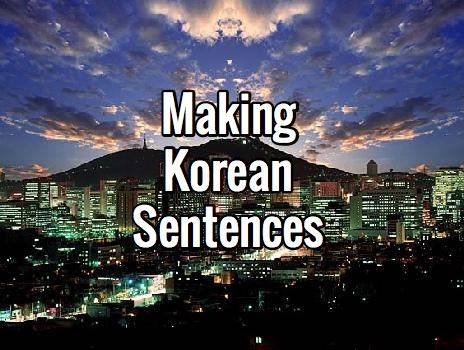 If you’re an English speaker, you know that English’s basic sentence structure and word order is….

While this structure is marked as S+ N, there is an arguable verb in there. It’s the ending – ida – which is often used and translated as the verb “to be,” but mostly it’s an affirmative copula (a copula is a word that links the subject of a sentence to a noun or adjective, and may or may not be a verb, but is translated as “to be.”)

To break this sentence down..

Sometimes you just want to say you’re doing an action and context isn’t necessary.“What’s Bob doing around this time? Bob sleeps.” So, let’s look at the example below.

Notice there is no verb ending here? Here’s a very important rule to know: Korean sentences must end with a verb (verb copula) or adjective. Lets try another example.

This is the most common pattern of all – the SOV – pattern. Remember, English is SVO, but with Korean, we usually end sentences with a verb or a verb copula. Just start thinking in the following fashion….

I water drink. I food eat. I korean learn… and you’re good to go. Here’s an example.

Let’s break the sentence down.

So these are the 4 most common and basic Korean sentences you’ll hear, read and write. Once you have these structures in mind, you’ll be able to start creating your own Korean sentences… which essentially what you want to do next.

Your next assignment: Start making Korean sentences by yourself.

~ Written by The Main Junkie

P.S. I highly recommend this for Korean learners. If you REALLY want to learn to Korean with effective lessons by real teachers – Sign up for free at KoreanClass101 (click here) and start learning!