So, you learned a few Japanese words, some phrases…

If you’re an English speaker, you know that English’s basic sentence structure is….

So, that’s where grammar comes in, my friend. In order to create Japanese sentences, you need to know grammar rules and the following below…

A はBです。 The first and most basic Japanese sentence pattern you need is saying that (something) is (something). A typical factual statement.  Like, “I am Linguajunkie, Language is easy” and so on. 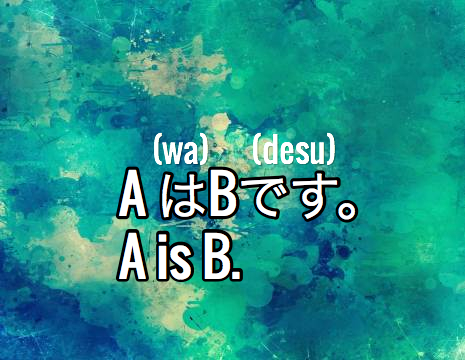 It’s that simple. This is the most basic and important sentence structure that everything else you’ll learn will be based on. What you should know about the Japanese used in this pattern is…

Remember how to introduce yourself in Japanese?(click) It follows the same pattern.

Bです。It is B, or giving short statements.

It’s yellow. It’s hot. It’s fast. It sucks! Basically, pattern #2 is a condensed version of pattern #1, where you don’t need the subject A, and you just want to make an exclamation or answer a question in 2 words or less.

A はBですか. Creating questions in Japanese.

So, Japanese language doesn’t have question marks. That’s where the particle か (ka) comes in, to help you ask questions. Add this か to any sentence and it becomes a question.

Similarly to pattern #2, you can also add the か and ask a quick question.

A はBをVerb. Making sentences with all kinds of verbs.

Remember, Japanese is a SOV: Subject + Object + Verb language. In AはBをVerb, A is the subject, B is the object and you end with a verb. In English, it’d sound like…

You know that は is a topic marker and in this context can take on the definition “is” or “to be.”

Then, there’s the particle を…

Of course, you’d need to know some proper nouns and adjectives to fully have fun with this pattern. Here are some examples of this pattern in action:

And such are the 4 basic ways of making Japanese sentences. It’s not too hard, is it? Leave me a comment if you think I should add more, and I will. Also, leave a comment with an example sentence as well.

Want to learn Japanese conversation? Sign up for free at JapanesePod101!