Want to say hello in Japanese?

Good! Greetings are the first thing you should KNOW if you’re learning Japanese. And if you’re not learning… leave!

So, today, you get a big Japanese greetings list with 24 ways to say Hello in Japanese and explanations for each one.

So, let’s get into all the Japanese words for hello.

Okay, let’s start with the morning. You’re awake somewhere between 6AM and 10:59AM. And you see a friend. How do you greet them? Here’s how:

By the way, you should also hear real Japanese and how it sounds.

So, if you’re interested, here’s a quick lesson greetings from JapanesePod101.com (a Japanese learning app).

Just press the play button on the player below to listen and learn to say hello in Japanese with the audio lesson.

Now, there’s a polite way to say good morning in Japanese. You simply take the phrase above and add “gozaimasu.” Pretty much pronounced “go-zai-mas” (zai rhymes with eye). Use this for strangers and people of higher rank.

So after morning is over… which is when? 11:00AM? Yes, after morning’s over, you should say “Hello” or “Good Day.” That’s where “konnichiwa” comes in. It’s one of the most recognized words and a super common Japanese greeting. For many learners, “konnichiwa” is their very first word.

But remember, it’s for the daytime.

When’s evening start? Let’s say 6PM. So after 6PM, you shouldn’t say “konnichiwa” anymore. We switch over to a good evening greeting. That’s the proper way of saying hello in Japanese at night.

Now this is super casual way to say hello in Japanese among young guys. That’s right, you probably use “yo” in English in the same way. Well, you can do it in Japanese. Not much of a pronunciation difference.

Girls only say this. There’s no special meaning and it’s not directly translatable. It’s just “hi” but it’s a cute way to say hello in Japanese. However, knowing Japanese how Japanese works – they probably took a longer word and shortened or switched it around.

Yes, this is a way to say hello in Japanese. However, it’s only used for answering the phone. Nothing else.

Do you pronounce this as “mooshy mooshy”? Please don’t. The “mo” is like mo in morning. And more often then not, it’s said as “moshi mosh” where the “i” in the second word is not pronounced.

This is another young-guy way to say “hey” or hello in Japanese. The “U” is silent in this word.

Where does “Ossu” come from? Well, it comes from pre-occupied Japan times from Kyoto and more specifically from martial arts students. They went from greeting each other with “ohayo gozaimasu” to “ohayo-ssu” and eventually brought it down to “ossu.” That’s why it’s also commonly used with anyone studying Japanese martial arts.

This does NOT literally mean hello in Japanese. But, it’s most definitely used as a greeting, in place of hello. And it’s used when you haven’t seen a person in a while. So, yes, this is the first word you can say when you meet someone to greet them.

Yes, this can be used to say hello in Japanese. It’s what you say when you come back home. It’s like a “Hello!” or “I’m back” or “I’m home,” and is overall a greeting for when you return home. That’s it. This is one of many Japanese common set-phrases that you should know.

As a bonus, if you come back home and say “tadaima” whoever is greeting you back needs to say “okaeri” or “welcome back.”

You know that dou means how so here you’re just asking “how things are?” But remember, Japanese language relies on context. If you and someone just took a test together and are talking about it – the listener will think you’re talking about the test.

It’s like Australian “Oy!” It’s one of those ways to say hello in Japanese… especially when yelling from across the street. Good way to get a friend’s attention.

Kyou meaning today, donna meaning how/what kind and kanji is feeling/state/overall condition. Kanji is a pretty versatile word because you can use it in many contexts — like the condition of your day, the taste of some drink, the atmosphere of a tough meeting, and so on. Replace “kyou” with some other subject like … test, wine, person’s name and it will work.

NO, this is not a substitute for “Hajimemashite.” Just a phrase to say to someone you meet again.. because it’s nice to meet them. Now this phrase is formal. How can you tell? It starts with the “O” in front of the noun Ai (meeting).

15. How have you been? いかがお過ごしですか。

Again, another formal phrase so don’t use it with friends but perhaps superiors. Ikaga is a very formal way to say how and as you can see, sugoshi (meaning time spent) begins with an o meaning it’s formal.

Yes, you’re right. “How are you” is not a PURE way to say Hello in Japanese but… people use it as a greeting, right? Then, it’s okay. If  “How are you” are the first words to come out of your mouth when meeting a friend in English, it’s the same for Japanese.

Also, this is formal. Drop the O from O-genki and turn it into a casual phrase:

Yes, this is the English “Hello.” You can indeed use it in Japanese though it’s super casual. Kids may use it. Adults, maybe not so much unless they’re being super friendly or joking.

“Saikin” means recently. And “dou” means “How?” But, this is just another one of many ways of saying “what’s up” or “what’s new” or “what’s recent?”

If you enter a store or a business in Japan, they will yell this out. Take it as a “welcome” or a “Come in!” Sometimes, shop staff will yell “irrashaimase” not only to entrants but to people walking by  in order to get them to come in. In that case, it’s more of a “Come in!”

“Nanka” is a shortened version of “nani ka” which means “something” or “anything.” And “Atta” is the past form of the verb “aru” which means to have, be, or happen. So, it is quite literally asking, “did anything happen?”

Want to tell someone that someone else said hi to them? Like, oh, “hey, John-san says hello to you.” This is how you do it: John-sanがよろしくって. (casual).

Doumo is a very versatile word. You can use it to say thanks. You can also use it to say hello in Japanese. This word is a shortened version of long greetings used back in the Edo period. It’s very casual so use only with friends.

Just in case you’d like to pass a hello to someone. (Casual).

24. Tell everyone i said hello. 皆さんに、よろしくお伝え下さい.

Just in case you want to say hello in Japanese… to everyone! (Formal)

Conclusion: How to Say Hello in Japanese

Now you know all the fun Japanese greetings.

Now that’ you’re here, how about a quick review, eh?

Take this survey and pick the most important phrase. Doing so will help it stick a bit better.

As a quick review, here are the ways to say hello in Japanese upfront. Check out the image below. 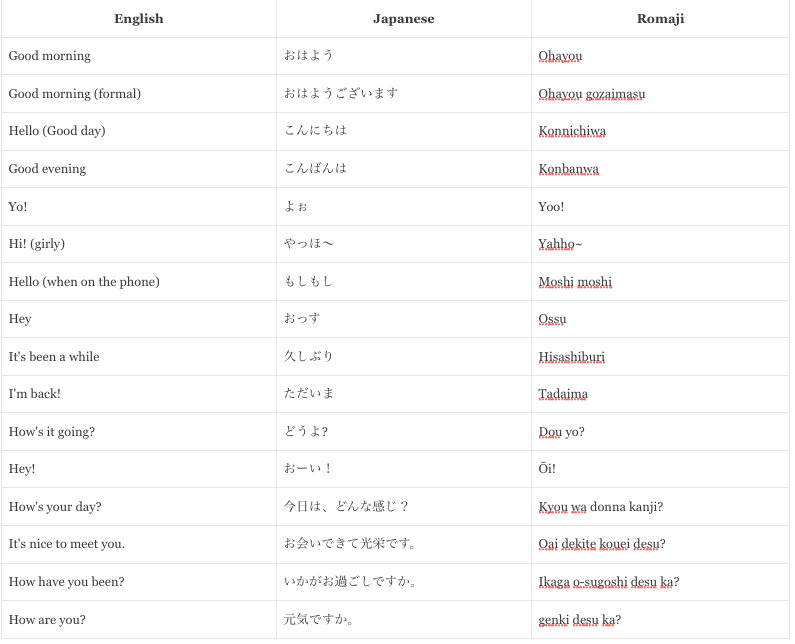 Do you know of other unique ways to say Hello in Japanese?

I read all the comments!

P.S. I recommend this for Japanese learners. If you REALLY want to learn to Japanese with effective lessons by real teachers – Sign up for free at JapanesePod101 (click here) and start learning!

4 thoughts on “Say Hello in Japanese: 24 Easy Phrases (Audio Inside)”