You might already know how to say hello in Japanese.

But, how do you say bye in Japanese?

Keep reading! You’re about to learn 23 ways to say bye in Japanese. Why 23? So you have variety and sound like a confident speaker, my dear junkie. But, you’ll maybe need 2 or 3… like the Ja ne Japanese phrase. So don’t worry about remembering them all.

Now, take this lesson and…

The Ja ne japanese phrase is a good one to start with. It’s a super common and casual phrase you’ll hear every single day. Friends use this a lot. So, it’s a good phrase to remember.

If you need to remember any way to say bye, let it be this. 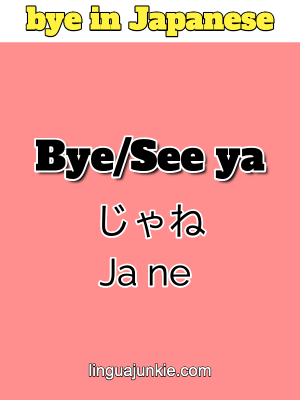 As you read this, also listen to this Japanese audio lesson on greetings (hello and goodbye) provided by JapanesePod101 You will hear the pronunciation and explanations on when and how to use the greetings. Just press the play button below.

This is a super common Japanese set phrase and you’ll hear it ALL the time.

But, it’s a bit complicated.

Don’t take it for its literal meaning – but it’s used to say bye to someone that has done work or did a lot. For example, coworkers can say it at the end of the day. You can say it to your friend after a long basketball game. If you want to be casual, just drop the deshita and say “otsukare.” 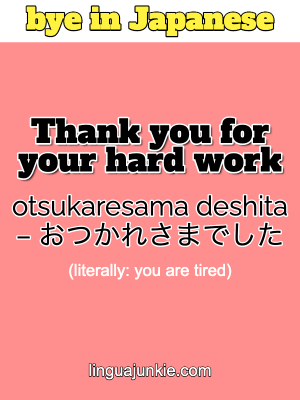 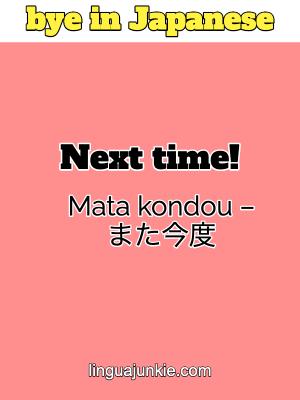 A super polite phrase. Use it with teachers, bosses and people above you. Basically, you’re apologizing or excusing yourself to leave. Otherwise, don’t use it with friends. Literally, it means – I will be rude/do a rude thing... (like leave!) 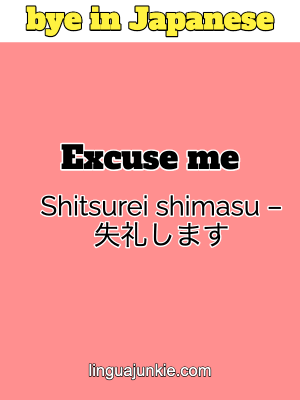 Casual phrase. This simply means “let’s meet again.” If you want to be polite, say また会いましょう (mata aimashou). You can even add a “ne” if you want to. 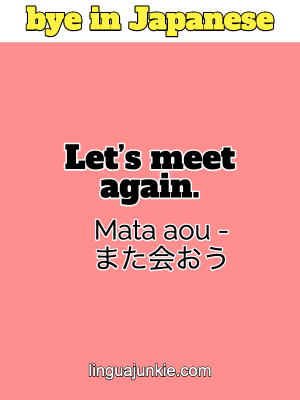 This is only used in a specific situation – when you’re leaving the house or when you leave a place that you will return to very soon. Like, later today. You can say it to your family. Literally it means – I’ll go and come back. So, they can expect you to be back. In response, they will say – itterasshai. (Which is kind of like “take care.”) 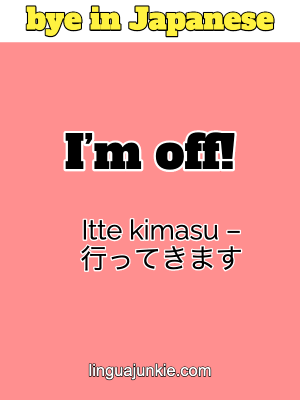 Literally, this means “again tomorrow” but it’s used to say “see you tomorrow.” There are more examples of this. You can substitute tomorrow with 1) next week, 2) next month, 3) some day, 4) next year… or 5) “next time” as you learned with また今度. 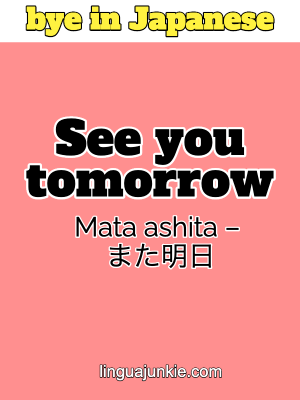 Most Japanese people don’t use this in daily life. Why? A “sayounara” is a forever-type goodbye. A you’ll-never-see-them-again bye. Think of breaking up. Or going on an Interstellar mission to space. It’s super formal and uptight.

The one situation where people use it is – students saying it to teachers at graduation and what not. Now, some blogs might say it’s not a natural phrase to use. But it is natural. Japanese people will use it on certain occasions. Not in daily life. It just depends on the context.

So that’s what sayonara means in Japanese.

Yes, literally, it means “thank you for the feast” because chisou means feast. When do you use it? After you’re done eating. Is this really a way to say bye in Japanese? Yes. For example, once you’re done eating at a restaurant, you can say this to the chefs. It’s indeed a parting greeting… while at the same time thanking the cooks. You can thank your mom too if you want. 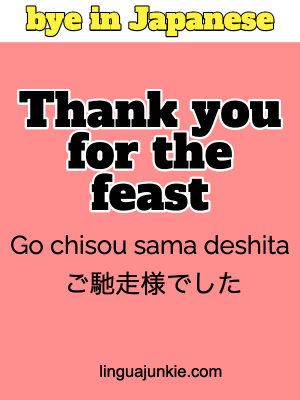 Another variation of saying bye in Japanese. Like in English, the point here is to tell them to get home safe. Not much else to know. Also, yes, a casual Japanese phrase. 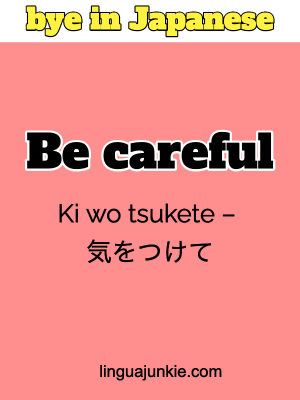 People will use this on you if you’re sick. Every time I leave a clinic or hospital in Japan, this is what the staff and nurses tell me – as a way to say bye in Japanese.

So, use it on sick people! 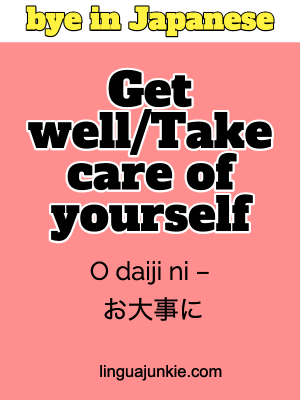 Aw, did someone take you out on a date? Aren’t you cute? I mean… yeah… I, the handsome Linguajunkie, go on dates all the time too! Okay, back to the subject!! This is a way to say bye and thank someone for the day. Use it for dates, for when someone helped you and for any other reason you’d want to thank a person and leave. 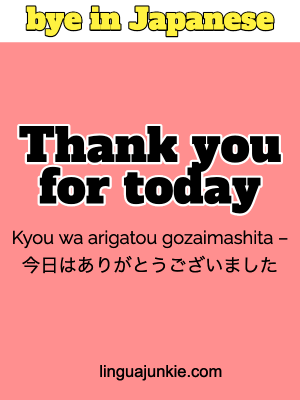 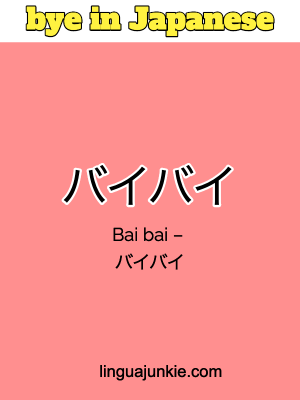 Another way to say see you later in Japanese. Casual. 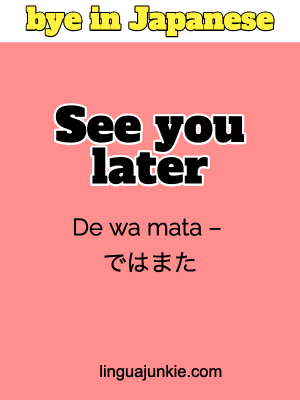 Okay, I gave you some different phrases that mean similar things.

And it doesn’t really stop there.

There are a TON variations that involve “ja,” “ato” and “mata.”

And there’s not much difference in meaning aside from maybe saying “see you tomorrow (mata ashita)” and “see you next time (mata kondou)” where you should know the difference between “ashita” and “kondou.” So, don’t think too hard about what the differences are. It’s like splitting hairs at times and there’s no need to analyze the specific nuance of “bye.”

But either way, it’s good to know variations.

Now… speaking of variations of how to say bye in Japanese, there’s a ton that involve the words “mata,” “ja,” “sore ja.” and “de wa.” But let’s clear up something:

By the way, “ato de” means later. But as you can see, there’s quite a bit of varations involving “mata,” “ja,” “sore ja.” and “de wa.” Good to know. But no need to memorize them. You get the point.

Now you know a whole bunch ways to say goodbye in Japanese.

But really, all you need is maybe お疲れ様でした, じゃね and さようなら.

And the ja ne japanese phrase is the one you might want to remember for good.

By the way, if you haven’t already, listen to this FREE audio lesson on Japanese parting greetings.

Do you know of other unique ways to say bye in Japanese?

Leave a comment below and I’ll add it to this list. I read all the comments!
じゃね