Want to know the Japanese words for moon?

Well, Japanese has many types of words… related to the giant cheeseball above us. But, if you just want to know the word for moon… the most obvious word you should know is “tsuki.” That means moon in Japanese.

So, let’s look at all the must-know Japanese words for moon. Cool? Cool.

Want to learn how to read and write in Japanese?  Get your free Japanese Hiragana/Katakana Workbook.

The word in Japanese for moon is tsuki.

The moon is very symbolic in Japanese culture and there have been different art and poetry relating to the moon throughout Japanese history. The moon also represents the changes in the months and the character, 月, means month. In addition to the month, Mondays are also represented by this kanji character. Monday is written 月曜日 or getsuyoubi in Japanese.

Moon viewing is a Japanese tradition that typically happens between September to October to view the full moon. It is held according to the lunar calendar on the 15th of the 8th lunar month. Japanese people eat rice dumplings while admiring the moon on this day. It was originally a way to hope for a good harvest season. In the past, people would also read poetry during this festival. 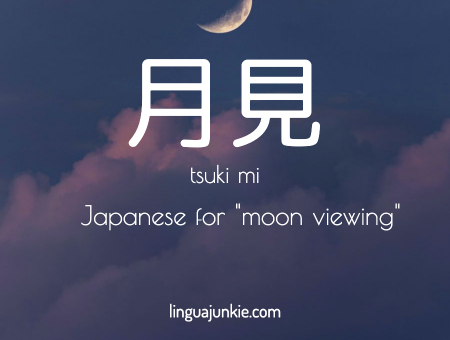 The full moon is called mangetsu. One of the more common Japanese words for moon that’s good to know.

Full moons have been depicted in Japanese artwork since early Japanese history. They are celebrated during the moon viewing festival between September to October. Japanese people have even believed that there is a rabbit on the moon.

This is another way to say full moon in Japanese which comes from old Japanese. Mochizuki has appeared in texts written as far back as the Nara period of Japan in the 700s. There is a unique tone to this word as it depicts the feeling of longing for the full moon to appear.

If you’ve ever experienced a large and bright full moon, it can be described as amamitsutsuki. This means that the full moon encompasses the whole sky towards the heavens. In the kanji characters that make up this word, 天 means heaven or sky and 満月 means full moon. 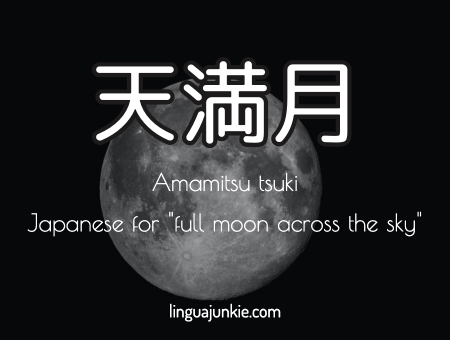 In Japan, the spring season can be quite humid and the sky can have more clouds or fog. The soft glow of the moon during the spring is depicted by this word. No matter the moon’s phase, a spring moon with a blurry glow is an oborozuki. Next time it’s spring, try looking at the moon to see if you notice any difference in the glow. 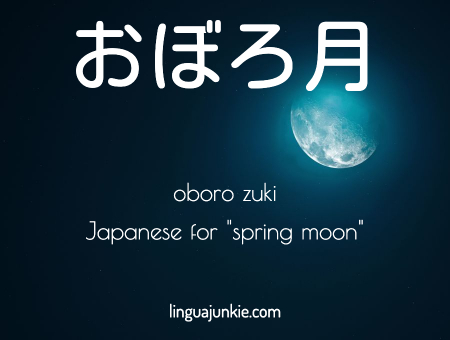 The crescent moon is called mikazuki. This stands for “third day moon” and it specifically refers to the third day of the moon phase cycle. However, most Japanese people use it to talk about any kind of crescent shaped moon. 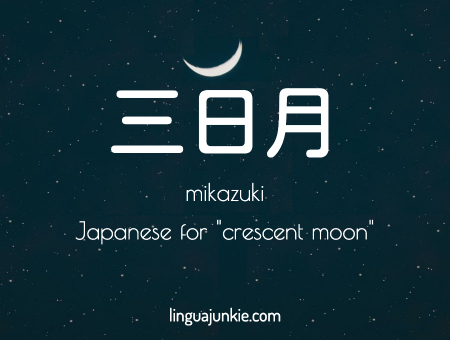 Moonlight is important in Japan because of the atmosphere it brings to people’s minds. There are many Japanese poems that set the scene by talking about the moonlight. You can find plenty of rural areas in Japan where there are few street lights, bringing out the moon even more. 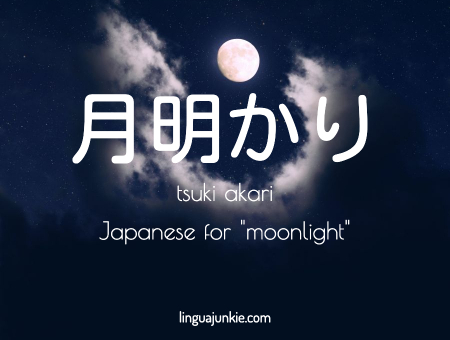 Japanese people believe that there is a rabbit on the moon, while the rest of us think the moon is made of cheese. So, why rabbits? This is because of the way the shadows appear on the full moon. Next time you see a full moon, try looking for a rabbit shape in the moon.

This is a phrase that compares the night sky with a moon to a vast ocean with a boat. When looking at the sky and moon it is easy to stretch your imagination with the expansive night sky. 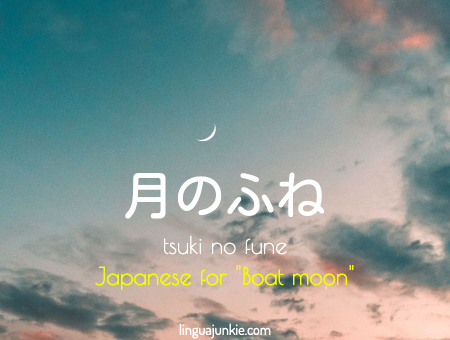 The moon is hard to see on a rainy night.

This saying represents a situation when something is hard to imagine. If something happens to you that you could never have predicted, you can use amayo no tsuki. It can also represent times where you don’t try to achieve something but only imagine it. 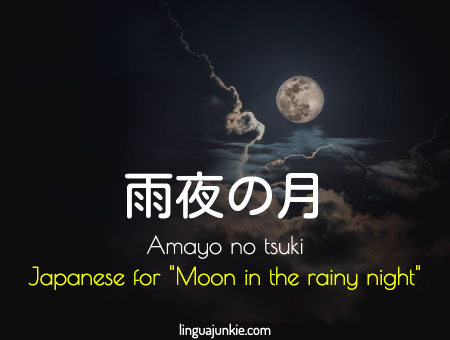 This is a saying that represents a situation when something is completely useless. There is no reason to have a lamp if there is plenty of moonlight. In this way, useless items can be expressed with this saying. 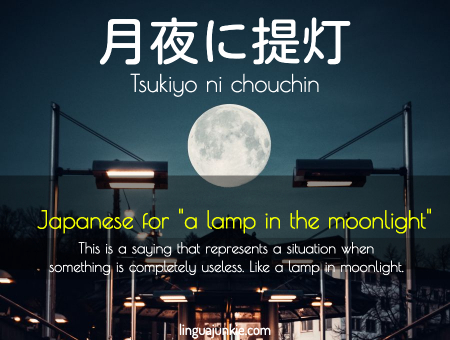 Moons and flowers are all considered positive things.

However, this saying brings to light the way that good things don’t tend to last long. Moons can be covered by clouds, and flowers can be ruined during the strong wind. It’s a saying that makes you remember to enjoy good things while they last. 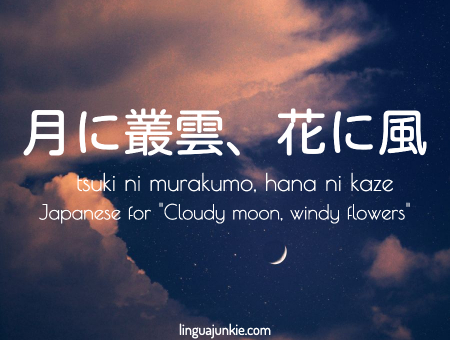 Ordinary and mundane life can be expressed with this saying. Rice is eaten at almost every meal in Japanese cuisine. Japanese daily life can be represented with moonlight and dinner with rice. 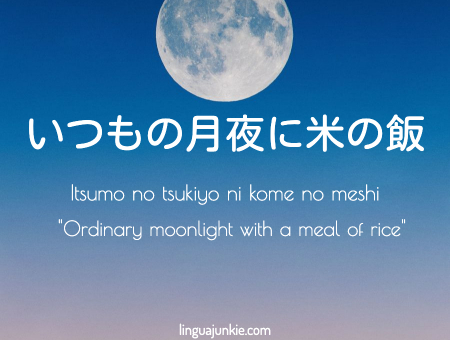 Both the moon and a soft-shelled turtle have a round shape. However, they are completely different things. This is a saying which is used when two things are completely unrelated to each other. For example, two people who are different and opposites of each other can be described as tsuki to suppon. It can sometimes refer to romantic couples who don’t seem to fit each other. 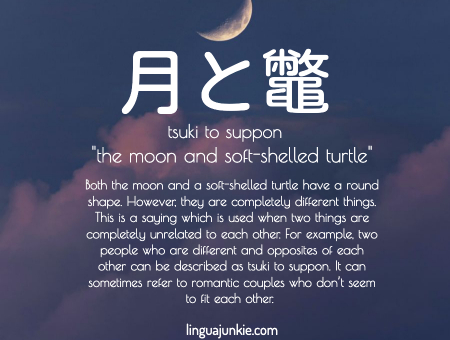 This is considered a poetic way to say I love you in Japanese.

How so? Well, stories say that Japanese novelist, Sōseki Natsume, came up with this as a way to express feelings while teaching English. He overheard his students translating “I love you” literally but since Japanese people don’t say such strong words, he opted for something more poetic and indirect. Source: https://niguruta.web.fc2.com/kensyo_kirei.html 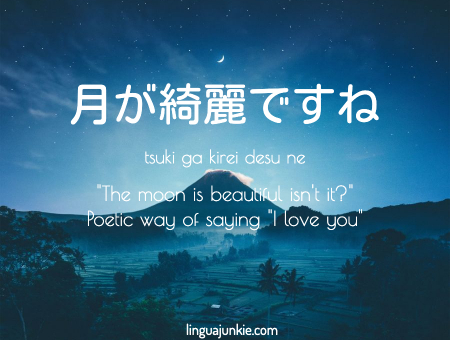 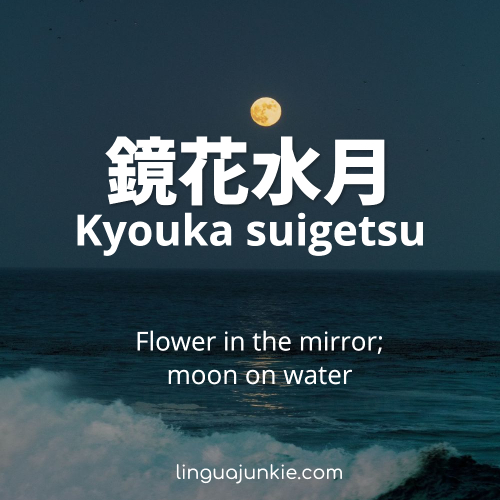 Now you know the many kinds of Japanese words for moon.

The Japanese language has a variety of other interesting words like… beautiful Japanese words if you click the link.

Anyway, which word was your favorite?