Saying I in Japanese…

It can be tricky business!

It’s as tricky as how to say you in Japanese.

And that’s why this guide is here. You’ll discover all the ways to say I, me or myself in Japanese. And you’ll know whether to say “watashi,” “ore,” “boku” or “atashi” in the next 2 minutes. Cool? Cool. 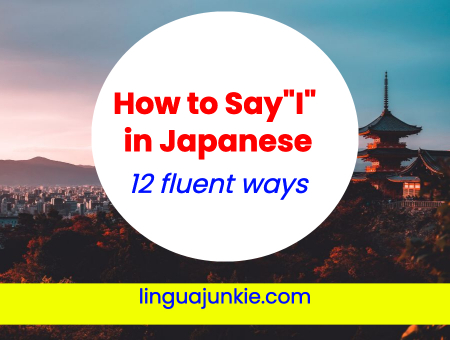 Let’s jump in and take a look.

It can be used in both polite and casual situations. For example, if you want to say “I want to go!” in a casual way, you could say “watashi mo ikitai!” In a polite version it would be “watashi mo ikitaidesu!” In this way, both situations can use watashi.

Although it is gender neutral in polite situations, in casual contexts it might be used more often by women. Men may choose to either use ore or boku for casual conversations.

However, you’ll almost NEVER hear this used because it is so formal. It might only appear in a speech or a business situation.

It gives off a cool sisterly vibe. However, unless you’re with friends it’s probably best to not use this pronoun. It could make you seem rude or too casual.

It can be a bit childish and casual but even older men will refer to themselves as boku. If you want to sound youthful this can be a good way to do that. A younger friend would use “boku” while talking to an older friend, since they’re not in the same age bracket.

You’ll likely only hear this in historical T.V. and dramas. In modern Japanese, it can sound comical if you start using this. There are many old-style pronouns that are no longer used in daily speech in Japan.

You should only use it when you are with your friends and family. If used in polite situations, it would be rude and surprising to the other person. You’ll hear this often in anime and manga where it is common to have a very casual style of speech throughout. It’s important to know that anime and manga are an exaggeration of reality and Japanese people don’t use ore all the time.

This means “house” but can also be used as a pronoun for “I”. It refers to yourself and possibly your household.

However, it is common to hear this in animes for a cartoon animal’s speech style. Somehow, it gives off a cute but determined nuance. In regular conversation, you wouldn’t use this pronoun. For example, a dog superhero cartoon character might say Oira wa suupaa doggu da! or “I’m a super dog!”.

In the past, this pronoun was used by women in the red light district and lower-income areas of Tokyo.

However, it is also a part of the dialect in Kagoshima prefecture. In general, you probably won’t encounter this pronoun in daily speech.

This is a famous pronoun for “I” because of the book by Souseki Natsume called Wagahai wa neko de aru, or “I am a cat”.

Wagahai is a very old style of speech and it is not used anymore. However, it’s important to know because it’s used in historic literature.

For the most part, it can be used equally with atashi.

It’s usually associated with men and it’s a modest way to talk about yourself. It can also mean “me” or “myself”. Note that it is a casual pronoun so better not to use it in very formal situations.

Conclusion: Saying I in Japanese Fluently

You should also how this word is used (or not), so that you can speak more naturally.

See, in Japanese, the pronoun “I” is a bit different to English. Let’s take a look at the ways.

There are many different ways to say I in Japanese. Why? This is because Japanese uses pronouns as a way to add different nuances to your speech. For example, if you want to sound masculine and rough you could use the “ore” to refer to yourself. On the other hand, “atashi” sounds like a pronoun that a sisterly woman would use.

Unlike in English, where gendered pronouns tend to appear only when you are talking in the third person (he, she, etc.), Japanese “I” can also have gendered connotations. So, it’s good to know what gender is associated with the pronoun so you can decide which to use.

3) Saying I is not always necessary.

Another thing to keep in mind is that “I” is not necessary for many situations. Sentences will make sense even without a pronoun. If you’re talking about yourself and it’s clear it’s about you, you don’t have to add a pronoun.

Beginner learners have trouble with letting go of using pronouns all the time. When you add “I” to a sentence in Japanese, try to think about whether it is necessary or not.

And that’s all you need to know.

So, did this clarify your thoughts about the variations like watashi vs ore and boku vs ore?