What are the must-know Japanese Autumn words?

In this guide, you’ll pick up 17+ words that are commonly used around autumn time. Culturally relevant words. Japanese nature words. You know, ones only native speakers know.

So, take a scroll down, start absorbing these words, and start speaking some autumn Japanese. Cool? Cool. Well, it is cool during autumn so, … cool.

To begin the list of Japanese autumn words, naturally, we can start with Aki. It’s how you say fall or autumn in Japanese. The kanji can be broken into two parts – the radical generally associated with grain (禾) and the kanji for fire (火). Japan uses a lot of seasonal imagery in its language and literature. This can even be seen within their kanji, which makes us visualize the fiery red leaves of autumn. 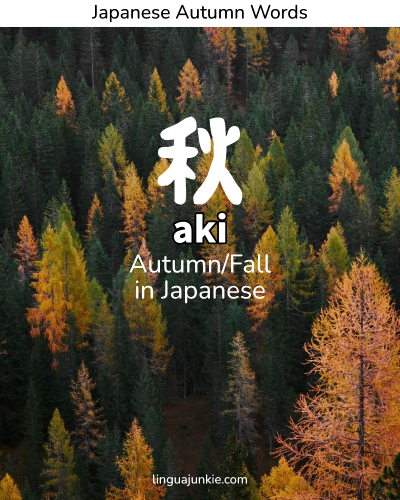 The start of autumn in Japan can be marked by the changing colors of the leaves.

The literal translation for 紅葉 is “red leaf”. Japan is home to many beautiful mountain ranges that are especially beautiful in the autumn as they turn into a brilliant crimson blanket of leaves. 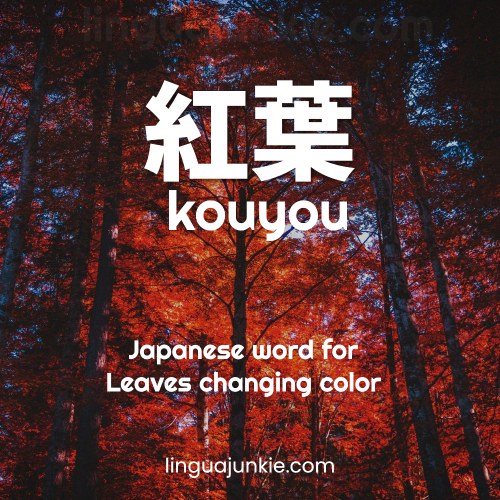 Pick apart the characters and this just means “crimson” and “leaves.”

You may have noticed that the kanji for this is same as “kouyou,” the word before it. Well, 紅葉 can be read as both “kouyou”  or as “momiji.” 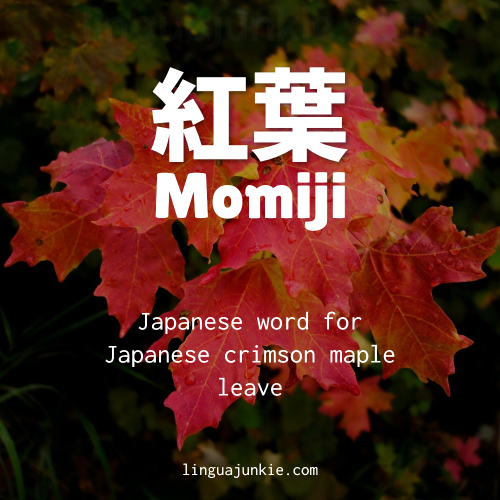 Momijigari is the custom of going to view the regions full of beautiful autumn red leaves and is a fun activity that can be enjoyed with friends! The changing of autumn leaves often begins in the north of Japan (Hokkaido) in September and gradually moves its way down to the southern regions. 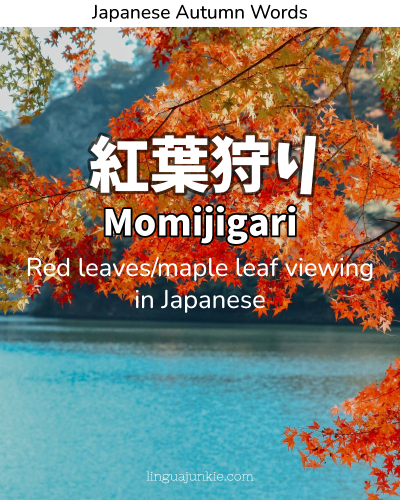 This is another fall-themed word and a common scene that you can see anywhere in the world during the Autumn season — falling leaves. In English, it takes 2 words to express it. In Japanese, it’s just one. And because it’s one, it carries a stronger image of autumn, fallen leaves and the atmosphere. 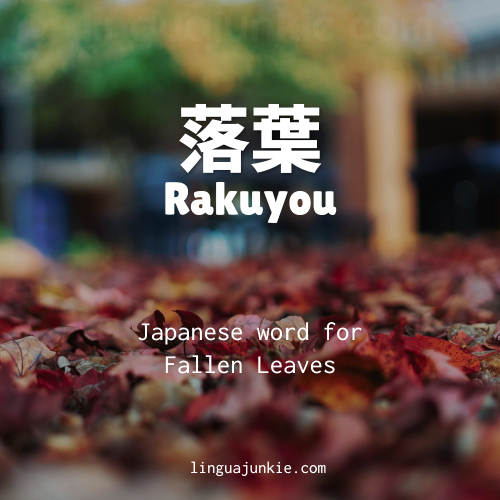 Autumn in Japan is not only full of beautiful nature, but is also filled with delicious seasonal foods! Kaki, or persimmons, are a sweet fall fruit eaten fresh or dried. It resembles the texture of a seedless tomato and contains flavors reminiscent of apple and mango without acidity. This cute round orange fruit is a staple Japanese autumn food. 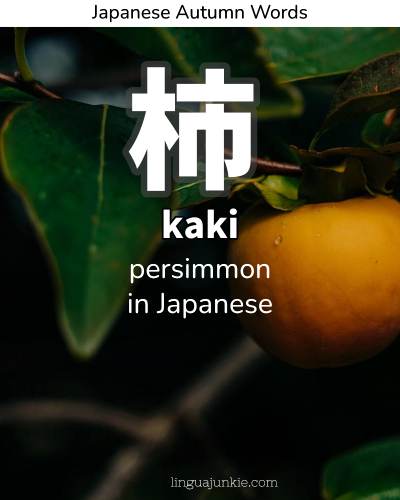 Continuing on the trend of food, Satsumaimo, or Japanese sweet potato, is another autumn staple. They are known for their purple skin and sweet, fluffy, yellow inside. Satsumaimo can be found everywhere in the autumn season, often flavored with a sweet and salty mix of soy sauce and sugar. They are found in many sweets during this season and have even been featured as a seasonal Starbucks flavor! 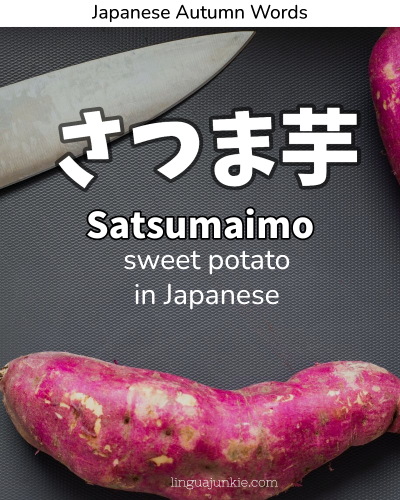 Yaki-imo is a popular way of consuming the previous fall word in the list – satsumaimo. Yakiimo are baked over long periods of time, resulting in a fluffy, rich, melt-in-your-mouth sweetness.

Yaki-imo is also famous for their ability to be purchased from slow driving sweet potato trucks that are active beginning in autumn until the springtime. 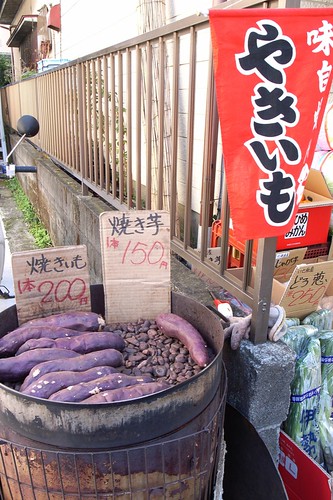 Tsukimi is a Japanese festival honoring the autumn moon. Some traditional festival activities include displaying decorations such as susuki leaves (Pampas grass) and eating tsukimi dango (moon-viewing dumplings). Other seasonal foods such as satsumaimo and chestnuts may be given as an offering to the moon. 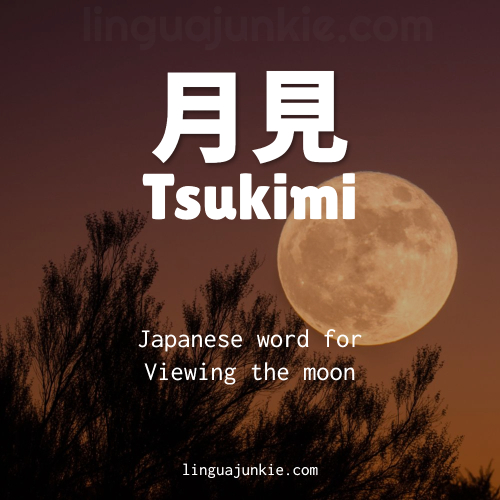 Shichi-Go-San has a literal translation of seven-five-three but is actually a rite of passage ceremony and festival that is held on November 15th to celebrate the health, well-being, and survival of children. Young girls aged 7 and 3, and young boys aged 5 will dress in kimonos or other formal wear. In modern times, children are often photographed to commemorate this rite of passage.

Suzushii is a Japanese weather word that describes cool temperature. It means cool or refreshing and is often used to positively describe the cool breeze and weather that marks the transition between summer and autumn.

A kotatsu is a heated table that is used daily in Japan as the chilly weather begins to creep in. 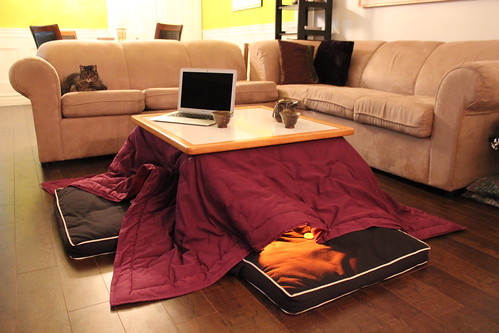 However, the basic idea remains the same. While kotatsu may be a word more associated with cold winter months, it definitely begins to make an appearance in the suzushii autumn season.

By the way, this is also a good Japanese winter word to know. 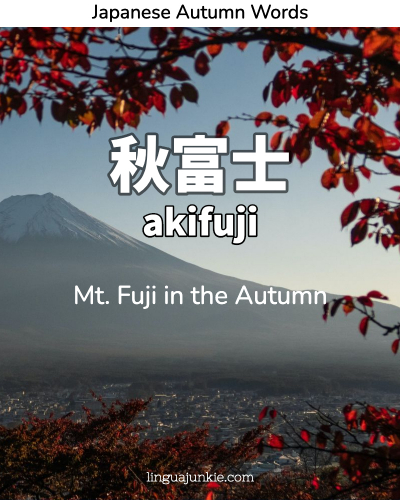 Now this combination of Japanese autumn words needs some explanation.

You likely won’t learn in a textbook.

So, there are many sayings in Japan where autumn is associated with specific activities in Japan such as “dokusho no aki” (reading of autumn), “supootsu no aki” (sports of autumn), and more. Why?

One of the reasons for these sayings is that there is a lack of busy activities and holidays during the autumn while also having more favorable temperatures than the hot summer.  Japanese summers are too hot. Japanese spring has the end of the fiscal year as well as the end and start of the school year. And with winter, businesses are in a rush to get things done by end of the year and take off for the holidays. So, this makes autumn the time to enjoy relax and… read or go to a museum.

Another way to interpret these statements is as “it’s the season for <insert activity.>,” which is usually autumn.

As the days grow shorter and the nights grow longer, this saying suggests that autumn is the perfect time to catch up on one’s readings. Winter and spring can have holidays and events like Christmas, New Year, school graduations, and entrance ceremonies. However autumn is a quiet time of the year in Japan and there is more free time to enjoy at home with a cozy book.

This saying is used because, in the autumn, the weather is not too hot and not too cold. This provides the perfect temperature for getting outside and playing sports. Historically, elementary and middle school children also enjoy Sports Day in autumn. Sports Day consists of a school’s students dividing into a red and white team, competing in physical exercise-based tasks for the most points.

Just as animals begin to prepare for winter hibernation in autumn, this saying suggests that we all have a growth in appetite as this season approaches. As the air cools and warm seasonal food surrounds us, we fill our tummies with sweet potatoes, chestnuts, and other warm, nourishing foods.

There is no doubt that the autumn season provides us with some of the most beautiful views of nature. This saying reflects one’s desire to capture these brilliant seasonal images in the form of art – paintings, writing, poetry, etc.

Conclusion— Back to You.

If you want to know other seasonal words, check out the links below:

What’s your favorite one here?