“I want to learn Japanese”

Do you really want learn it? And how do you say that in Japanese? You say “Nihongo ga manabitai desu.” In Japanese, that would look like this: 日本語が学びたいです。

In this article, you will indeed learn some Japanese.  You will: ① learn how to say “I want to learn Japanese” in many ways, and ② actually get some ways to learn Japanese: Apps, Textbooks and Japanese courses.

“I want to learn Japanese.” Useful Phrases for Learners

Let’s jump into the “I want to learn Japanese” phrases first. Want to read? Speak? Understand? Check these phrases out and repeat them out loud.

1. I want to learn Japanese.

Okay, so if you don’t already know, “Nihongo” means Japanese. Then, we have the verb, to learn, which is “manabu.” But, in the phrase above, it ends with”tai.” So, first thing you should remember right now: -tai is how you express your “wants” in Japanese. You take a verb and conjugate it into the tai form.

Since this article is all about “I want to….” you will see the “tai” again and again.

And that’s good. You will remember it through constant repetition.

2. I want to be able to read Japanese.

See? There’s the “tai” again! There’s a new word here: yomeru. It’s the verb “yomu” or “to read” but conjugated in the potential form where you want to express whether you are able to do something. So, “yomeru” means “to be able to read.”

Finally, we have “tai” form of the verb “naru” which means “to become.” 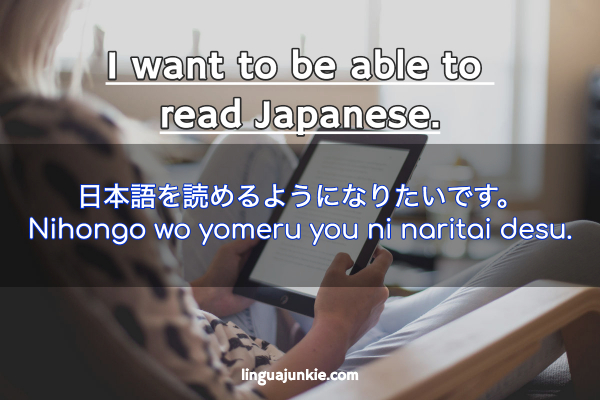 3. I will learn Japanese.

Are you confident that you will learn Japanese? Yes? Then learn this phrase!

Look! We ran into the verb,”manabu,” again. Remember? It means “to learn.”

Now, this is not so much of “want” phrase. But, if you want to learn Japanese and are confident about it, you will want to express your rock-solid beliefs and plans. That yes, you will learn and nothing can stop you.

So, when you decide to start learning, use this phrase. 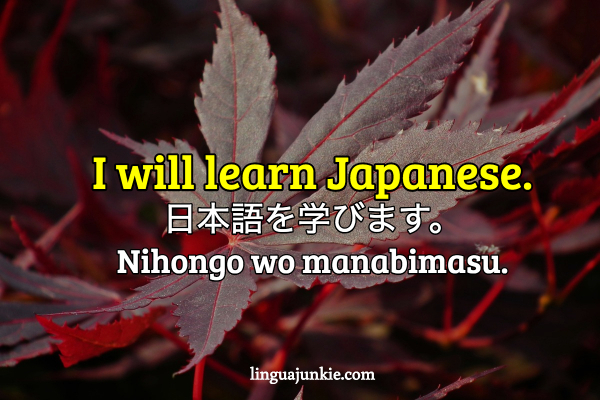 4. I want to speak Japanese better.

Okay, there are some more new words here.

Finally we have this interesting pair: “you ni.” It’s a grammar form that means “so that.” 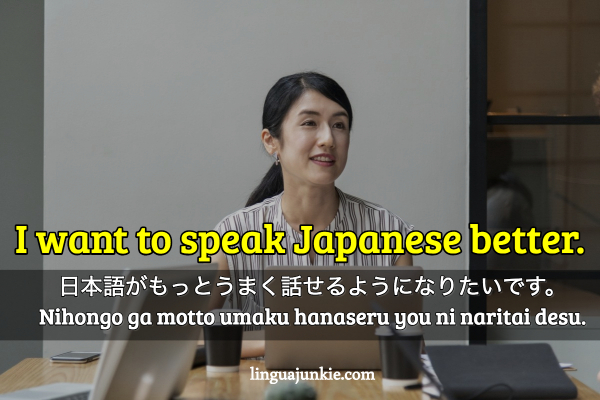 5. I want to be better at Japanese.

By now, you already know these words. 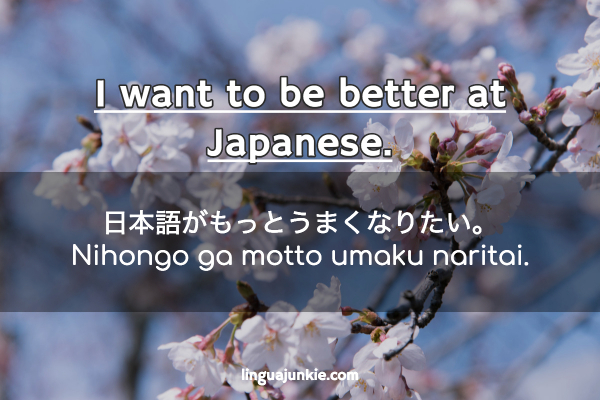 6. I want to become fluent in Japanese. 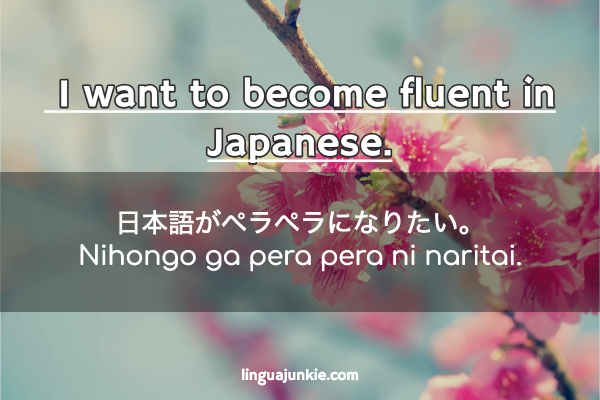 7. I want to speak Japanese fluently

You learned “pera pera” above already but there’s a new word here. It’s “shaberitai” which means “want to talk.” Yes, it’s in the “tai” form. The original form of the verb is “shaberu” and it means “to talk.” 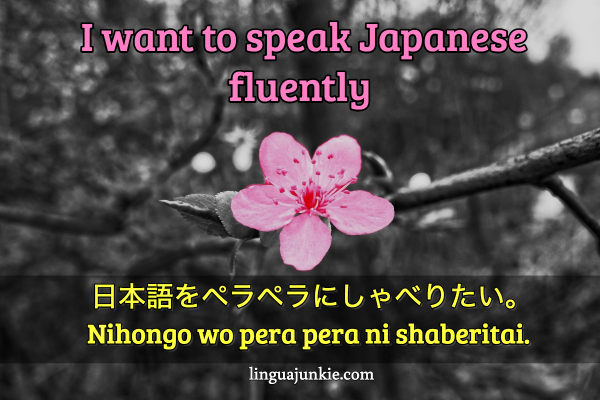 8. I want to understand Japanese.

“Wakaritai” comes from the verb “wakaru” which means “to understand.” 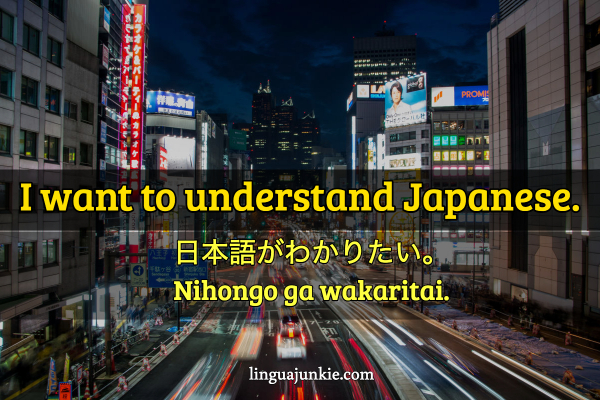 Do you want to understand Japanese? Then, I suggest you get an online course right here. Or, you can listen to Japanese audio lessons and start understanding in minutes.

“Kyou” means “today” and “kara” means from. So, from today! The next word is a super common word: “watashi.” It means “I” and you should never forget that. Finally, the only other new word here is “benkyou” which means study. 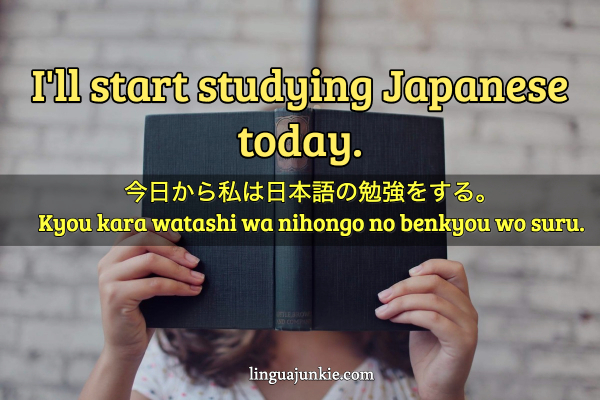 Woah! What is this “naa”? I’ll tell you. It’s a suffix you use to express your thoughts, feelings and overall wishful thinking. Kind of like, if you were sitting daydreaming, sighing, and suddenly thought to yourself: “ah, wouldn’t it be great to actually speak Japanese?” That’s when you use the “na!”

So, this line is really up to interpretation and can be translated in many ways. It depends on how you feel. Aside from “I’d like to study Japanese…,” it can also be interpreted as “I want to learn some Japanese…” 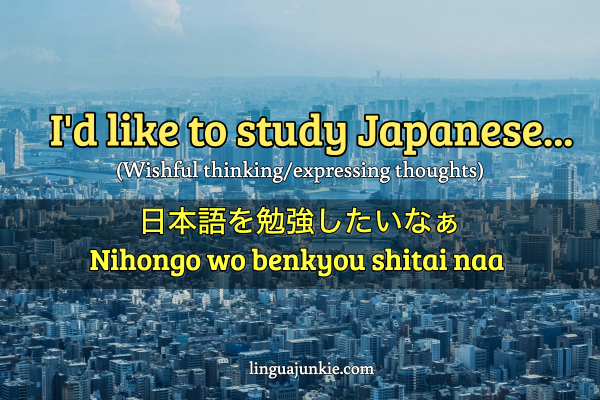 This is another way to express your desire to learn Japanese.

Oh, there is a new grammar point and word here too. Let’s do the word first. It’s “dekiru” which is a verb and means “to be able.” But, it’s conjugated with the “-ba” ending which kind of means “if,” “when” or “if only.” Finally, there’s the “ii na.” “Ii” means “good” and when combined with the “na,” it’s a “would be good” wishful-thinking type of phrase.

So, this line is kind of like: “It would be great ig I knew (was able/capable of) Japanese.” 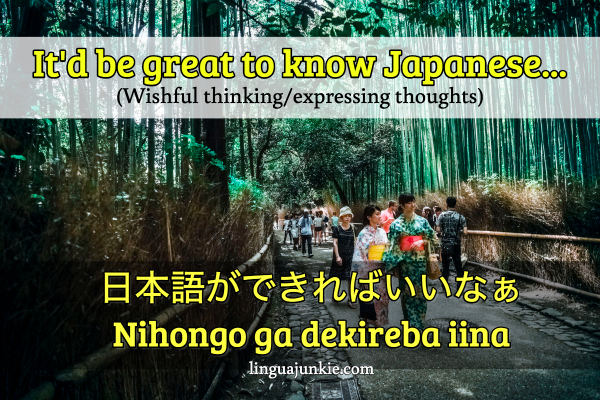 12. My dream is to be fluent in Japanese

Since you’re reading this article, it should be Japanese. Oh, did you notice a new word here? Yes, “yume.” “Yume” means dream. 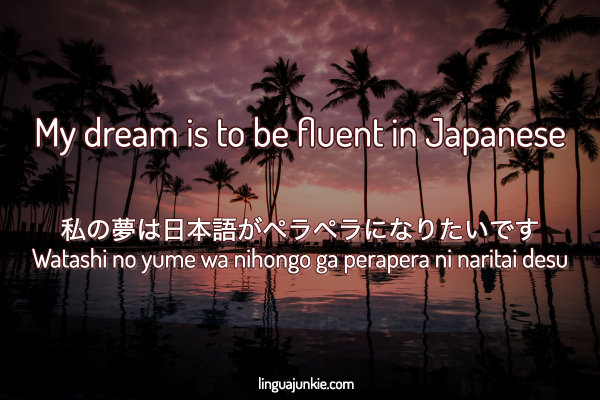 13. My goal is to be able to speak Japanese

What about goals? What’s your goal in life?

Do you want to talk about goals in Japanese? Then, you’ll notice that it is “mokuhyou” in Japanese. That’s the new word that you should know. 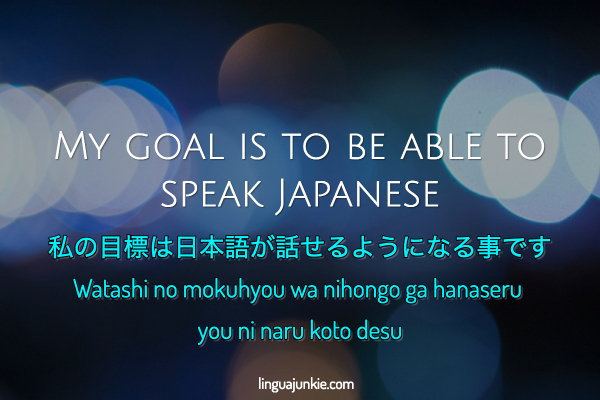 Now, you can say “I want to learn Japanese.” You can also talk about reading, speaking and understanding this language. Just re-read and repeat these lines some more if you want to master them.

But wait, what’s that? You say you want to learn MORE?

Well, my friend, check out the links below for resources:

Written by the Main Junkie

Check out JapanesePod101, a complete Japanese learning program with 2,000+ audio and video lessons, apps, study tools, eBooks and PDF lesson notes. I think their lessons can and will help you learn and speak Japanese.