How do you say yes in French? You just need to say “Oui.” But, there are plenty of other ways too. And since you’re a smart language learner, you will learn them rest of them.

Sound good? Good. By the way…

Oui is the most popular and common way to say yes in French. You can pronounce it as “wee.” It can be used in any situation to clearly express a confident “yes.” 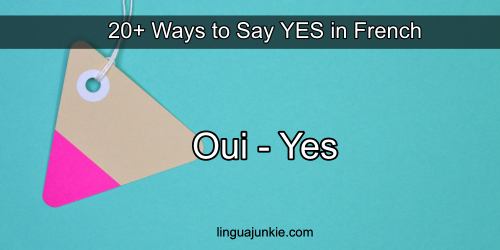 Ouais is a slang version of oui. It is used very often but usually not in a formal situation. You would not answer a judge with ouais; you would use the formal oui. 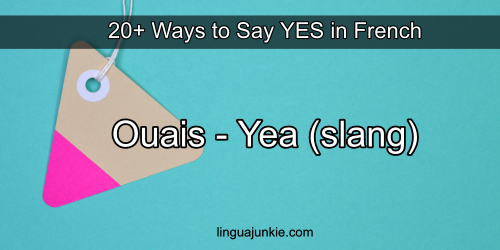 However, with friends, it would be natural to say ouais. It is a version of oui with a lazier pronunciation. It is pronounced “way.”

3) Si – Yes (in response to a negative statement)

Si is yes in Spanish and can sometimes be yes in French too. If a person asks a negative question such as, “You don’t like fruit?” and you want to say, “But yes, I do,” then si would be the correct form of yes to choose. This avoids the confusion of saying oui, and the person posing the question not knowing if you are agreeing or disagreeing with him. 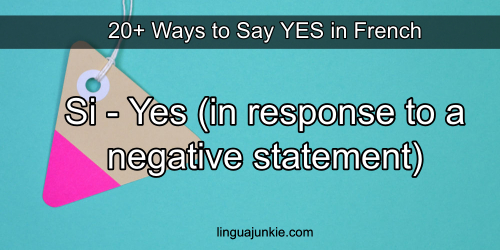 We do not have an equivalent in English, and this causes confusion when negating a negative question. Si is pronounced “see.”

This expression was taken from the exact same word in English. It has the same meaning and pronunciation. It is informal in French and can be used with friends. For example, when hanging up the phone after talking to a friend, a French person might use English and say, “Okay. Bye-bye.”

D’accord means okay. It is pronounced “Dah-cohr.” D’accord can be used in formal and informal situations to indicate you are okay with a suggestion.

Je suis d’accord, pronounced “jhuh-swee-dah-cohr,” is the longer version of d’accord. It is a full sentence that means I agree or I am in agreement. It can be used in all situations, but it is probably is a slight bit more formal than the abbreviated D’accord. 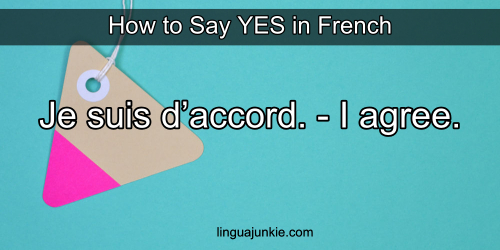 Moi aussi is used in response to someone else’s positive statement and means “Me too” or “Me also.” For example, if someone said, “I love chocolate,” a logical response would be Moi aussi to indicate that you love chocolate as well. It is pronounced “mwah-o-see.” 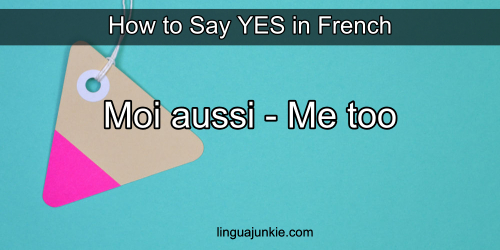 Tu as raison (pronounced “to-ah-rayz-ohn”) and vous avez raison (pronounced “vooz-ah-vay-rayz-ohn”) both mean “You are right” or more literally, “You have reason.” French speakers use the informal Tu-form when talking to a friend or someone they knew well. The formal Vous-form is used for groups and for people to whom you wish to show respect. 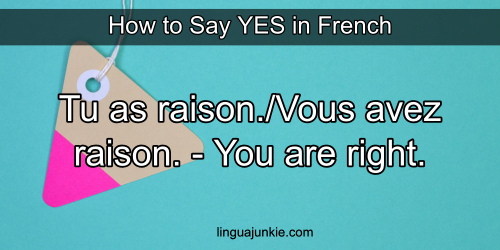 Bien sûr is an enthusiastic “yes” that means “Of course.” The literal translation is “Well sure” from bien (“well”) and sûr (“sure.”) This can be used in any situation. It is pronounced “be-ihn-soohr.” 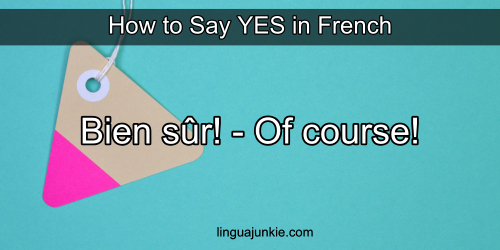 Pourquoi pas, pronounced “poor-qwa-pah,” means “why not?” Pourquoi means “why;” pas means “not.” This is used to express a less enthusiastic “yes” that indicates there is no reason to say no, so why not just say yes. 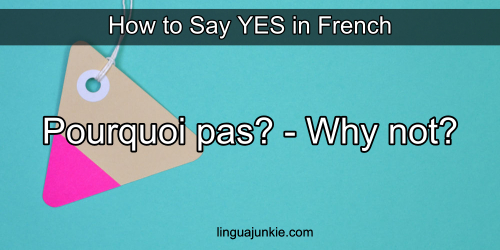 Certainement is used when something is a certain or absolute “yes.” It literally means “Certainly.” It can be used in both formal and informal situations. Certainement is pronounced “Sur-tan-uh-mohn.” 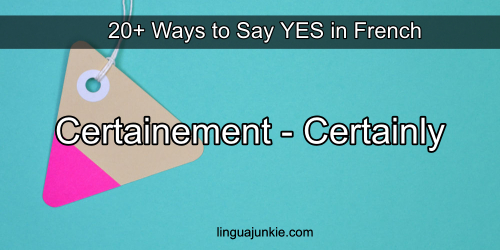 12) Sans aucun doute – Without any doubt

Sans aucun doute literally translates to “without any doubt.” This expression is used when you want to express an extremely certain “yes.” It can be used in any situation. The phrase is pronounced, “sahns-o-cahn-doot.” 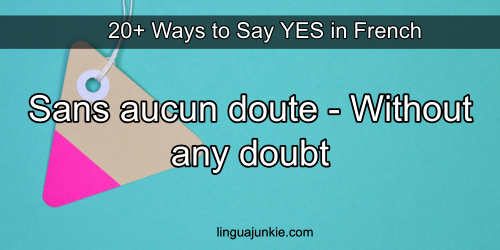 Absolument is an enthusiastic “yes” that literally means “Absolutely.” When you agree completely or want to express a clear “yes,” this expression can be used. It can be both formal and informal. It is pronounced, “ab-so-loo-mohn.” 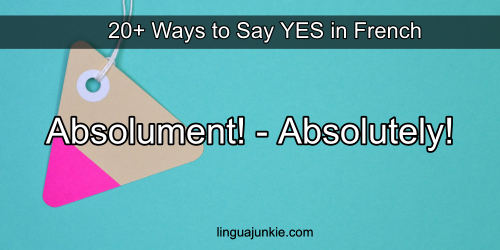 Je comprends (pronounced jhuh-com-prohn) means “I understand” or “I comprehend.” This expression can be used in any situation when the speaker wants to say that he/she understands. The French verb, comprendre, shares the same roots as the English words “comprehend” and “comprehension.” 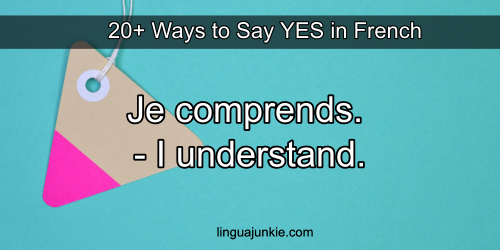 This expression is a possible “yes” with a little bit of doubt. Peut is “can;” être is the verb “to be.” Peut-être is used to answer that something “can be” happening or “maybe” will happen in the future. It is pronounced “puh-tet-ruh.” 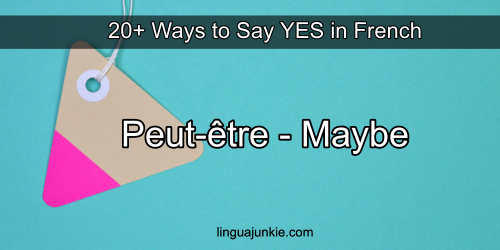 Probablement means “probably.” French speakers use probablement (pronounced “pro-bab-luh-mohn”) in a situation where they want to respond that something is likely to happen. It is a probable “yes.” 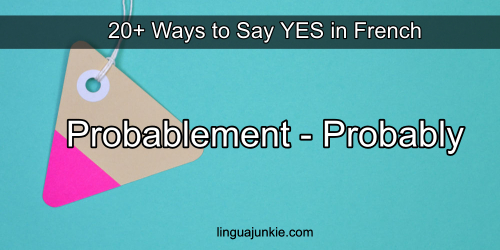 Volontiers is an expression to say an enthusiastic “yes” to an offer. It implies that the speaker would be happy to do whatever has been proposed. It can be translated to mean “yes, please,” or “yes, with pleasure.” It is pronounced, “vo-lohn-tee-ay.” 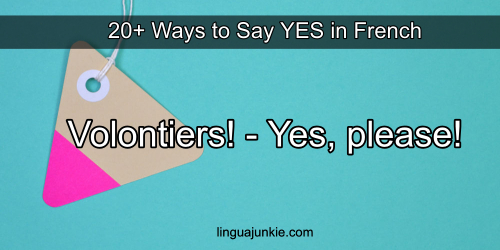 Avec plaisir literally means “With pleasure.” This expression is used to enthusiastically say “yes” to an offer. It means that you would be happy to do whatever has been asked of you. It can be used in formal and informal situations. Avec plaisir is pronounced “ah-vek-playz-eer.” 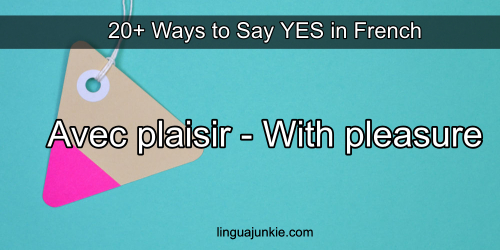 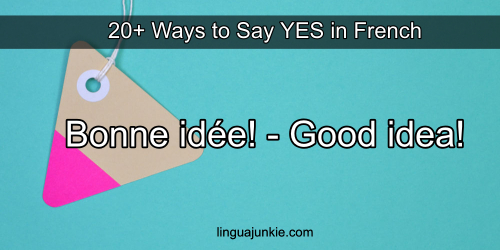 Now you know all the fun ways to say yes in French.

Well, you can print this page out for extra review. You can check out these next few lessons.

But, if you’re tired of reading articles and want to speak real French, I recommend FrenchPod101.com. Visit them for audio/video lessons by real teachers.