How do you say how are you in French? The one phrase you should know is… “Comment allez-vous?” But in this French guide, you’ll learn more. Why? Because you’re smart. And the more ways you know, the better you can express yourself.

13 Ways to Say How Are You in French 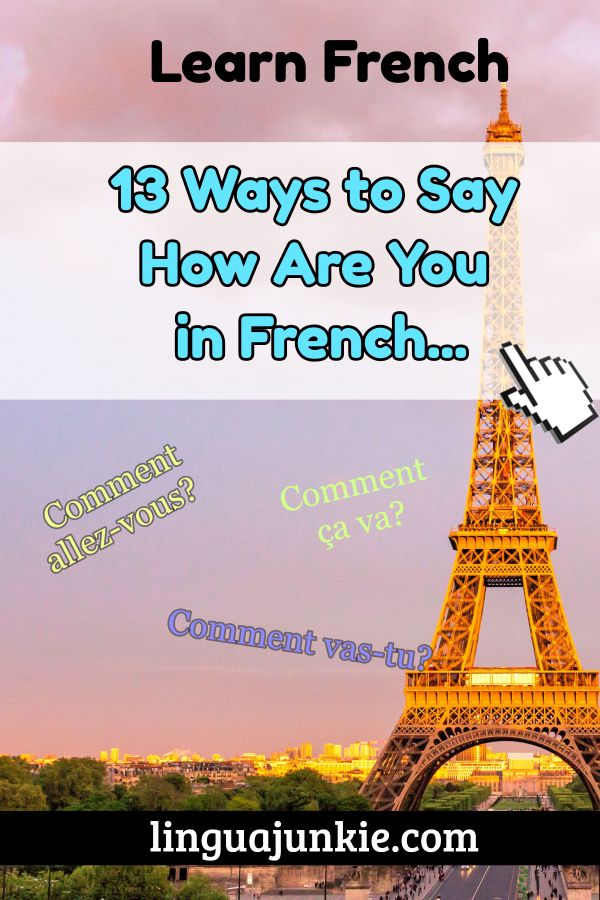 By the way, you’ll want to hear REAL French pronunciation.

Press play and listen. You’ll hear how to say hello in French and learn other words. This lesson is from FrenchPod101 (click here for more fun audio lessons) a popular French learning website.

This is the best way to say how are you in French.

Even people who have never formally learned any French will often be familiar with this. It is a question that literally asks how are you going.

English speakers would translate this to how are you or how are things going. This is a formal expression because it uses the formal you (vous.) Use it on people who are older or for people you do not know very well.

A common response would be Je vais bien meaning I am doing well.

This is just a bit less formal that comment allez-vous.

The literal translation is the same: how are you going.

Comment ça va is an informal way to say how are you in French. Use it with people who are your friends or close acquaintances.

This expression literally means how does it go. A common informal response would be ça va bien which means it is going well.

Ça va is another informal way to say how are you in French.

You can use this to ask your friends and close acquaintances how they are doing. Ça va literally translates to it goes. If things in your life are just average, you can answer the question with the same exact phrase, ça va, which tells your friend it’s going. If it’s going well, you can say ça va bien.

Tu vas bien asks are you doing well. The literal translation asks if you are going well.

This expression uses tu which is the informal you in French. You could use this phrase with a friend or someone you know well, but it would be impolite to use with someone older than you or someone to whom you wish to show respect.

To ask someone older than you or a group of people if they are doing well, you could use the phrase vous allez bien. Vous can be used to be formal, but it can also be used in the plural sense. If you approach a group of friends, it would be polite to address the group with vous allez bien which is pronounced vooz-al-lay-be-in.

Although quoi de neuf literally means what is new, it can also be interpreted as what’s happening or what’s up. This is a friendly expression that can be used to catch up with people you haven’t seen in awhile. It can also be used to check in with friends. It is pronounced qwa-duh-noof.

Qu’est-ce que tu fais literally means what are you doing but can also be interpreted as what are you up to. This question uses the informal you (tu) which is used between friends or people who know each other fairly well. You would not use this expression with someone you do not know well.

Que fais-tu is a shortened version of qu’est-ce que tu fais. It literally means what do you although most English speakers would say what are you doing. This is a casual expression that can be used between friends. It again uses the informal you (tu.)

If someone appears to not be doing well, you can ask him/her qu’est-ce qui ne va pas? This question translates to what is not going. This expression is only used when it appears that someone is not doing his/her best. This would usually be used between friends or someone with whom you feel comfortable asking about his/her sad situation.

When you want to ask someone what is wrong, you may use the question qu’est-ce qu’il y a? This can be formal or informal. It can be used from a doctor to a patient to find out what is wrong medically or from friend to friend to question what is not going well in life. It literally means what is there.

Ça ne va pas is the negative form of ça va. Instead of asking how is it going (ça va), this question asks how is it not going (the ne…pas makes the phrase negative.) In this sense, something appears to be not going well. This expression is informal and would be used between peers or people with whom you feel comfortable.

Now you know the top 13 ways to say How are you in French.

Want more French lessons? Check out mine below.

If you want to master these phrase, I suggest printing this page out. Why? So you get to keep it and glance at it as much as you want.

But, if you’re tired of reading articles and want to speak real French, I recommend FrenchPod101.com.