But, in this guide, you’ll learn 20 ways to say no in French. 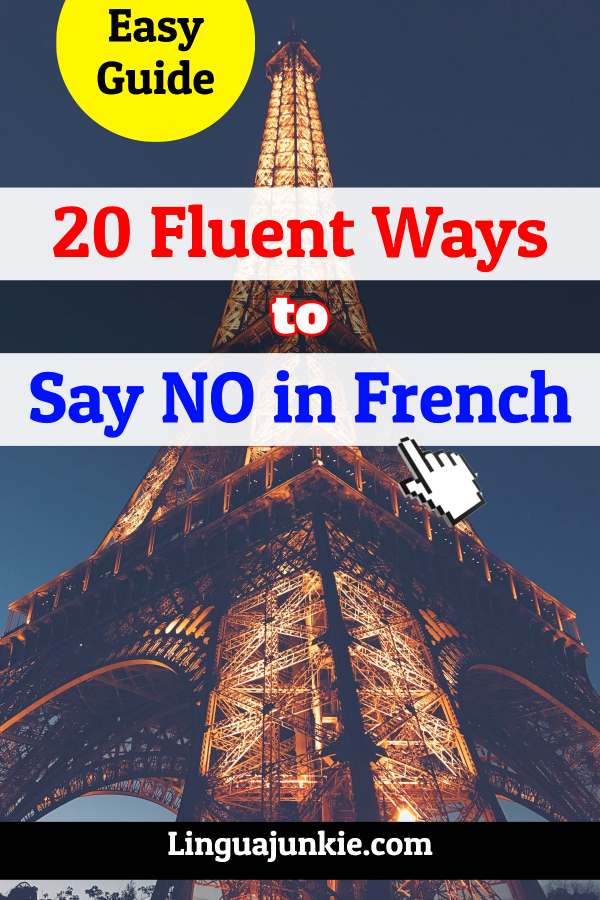 Non means “no.” This is the best way to say no in French. You can use it both formal and informal situations. 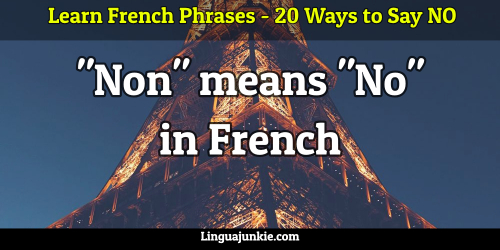 To make this expression more formal, add someone’s title after the non. For example, “Non, madame” or “Non, monsieur.”

Non merci means “No thanks” or “No thank you.”

This is more polite than simply saying no in French. You can use this expression to show more respect, but it can be used with anyone in any situation. 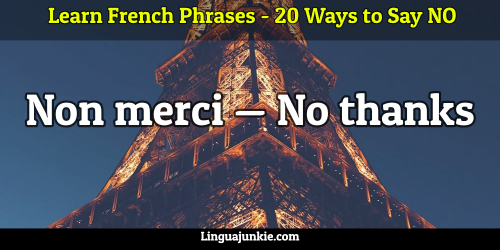 You can add a title after the response to make it more formal, such as “Non merci, mademoiselle.”

“Absolument pas” literally translates to “absolutely not.” Use it when you need to express a stronger “no.” It can be used both formally and informally. 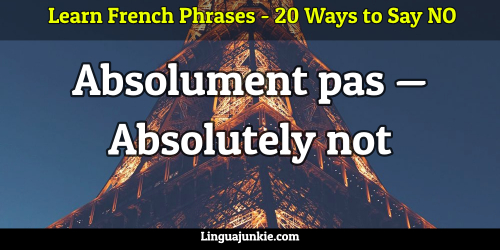 This is another strong way to say no in French. When something is a definite “no.” It can be used when speaking with anyone.

This means you have zero desire to do something. Use it in any situation. 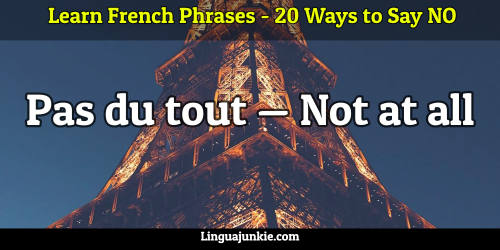 This expression is a strong “no.” The strongest way to say no in French. Meaning, you hope something will not ever happen! It can be used in formal and informal conversations. 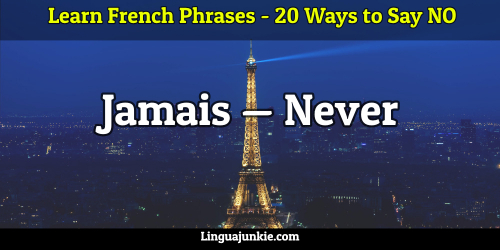 You already know “jamais” so this phrase builds up on it.

It literally means “never to the big never.” This is an even stronger negative expression that just saying “jamais.” You use it to emphasize that something will never happen. 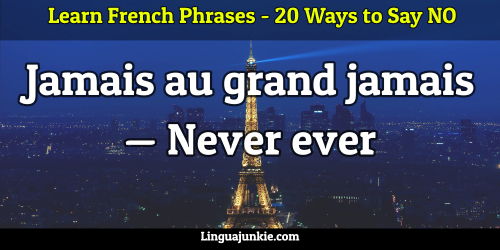 Okay, not really in a million years.

Literally, this translates to “never of the life,” or as English speakers would say, “Not in this lifetime.” This is a strong “never” expression that can b used at anytime. 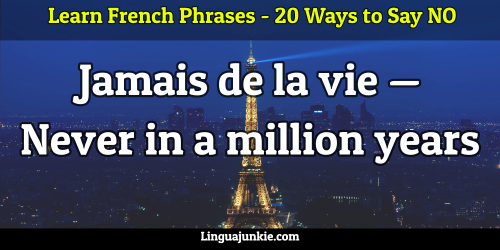 Let’s break down this way to say “no” in French.

Literally it means well (bien) sure (sûr) that (que) no (non.) This expression means the answer is an obvious “no.” This can be either formal or informal. 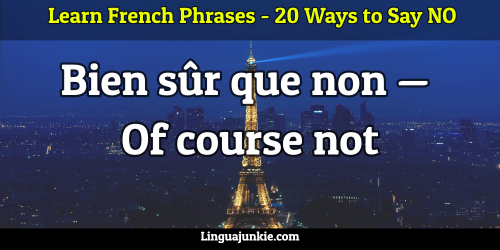 What does this mean? It means that you agree with someone’s negative statement.

For example, if someone says they don’t want to do something and you agree, you would say “Moi non plus.” It can be used with anyone at anytime. 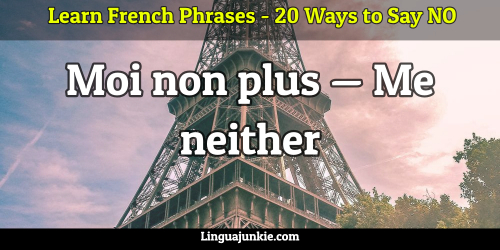 Literally it translates to “I am not of agreement.”

If someone tells you something and you do not feel the same way, this is a good expression to use. It is both formal and informal. 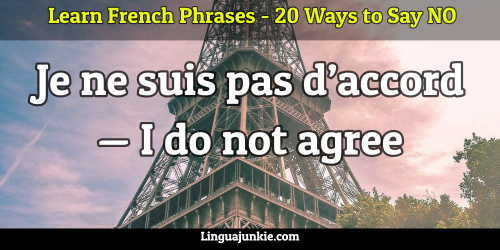 In a less formal situation, French speakers will drop the “ne,” and it will change to “J’suis pas d’accord.”

In another language, I’d be calling you a “Cake.”

But in French, it literally means “You have wrong.” This expression uses the informal “tu,” so use it only with people that you know well. 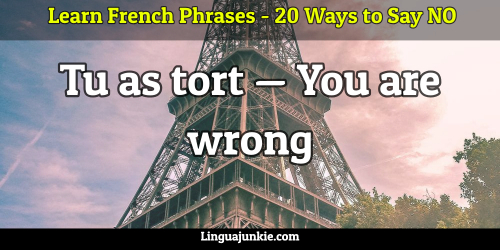 This uses the vous-form of “you” which is used in formal situations or when addressing a group of people. 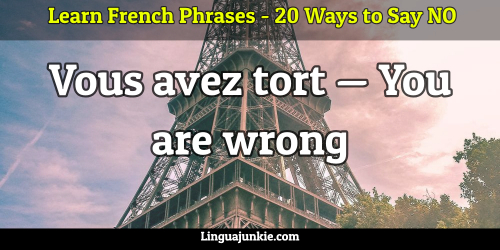 Okay, you’ve been reading my guide on how to say no in French long enough. So, I’ll be upfront. The truth is…

I am your father.

But, good French phrase to know, right? This can be said in both formal and informal situations. When written in a formal document, French speakers would write the full expression, “Ce n’est pas possible,” but in spoken French, the “n’” is often omitted.

It can also be shortened to just “Pas possible!” 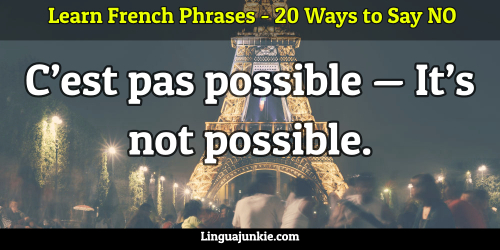 This expression is used to say something is impossible. Use it at anytime. 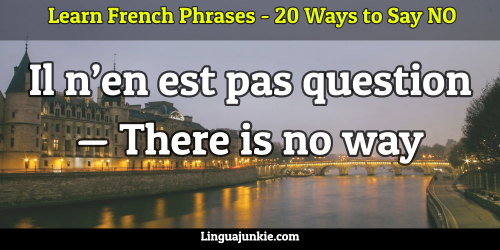 This is the abbreviated form of the expression, “Il n’en est pas question.” It means that something is impossible or out of the question. It can be formal and informal. 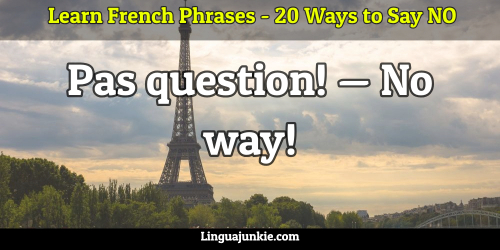 C’est hors de question means “It’s out of the question.” This means something is impossible. Anyone can use this expression at anytime. 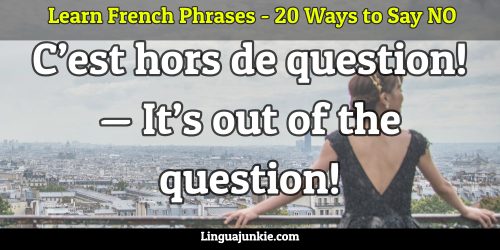 Literally it translates to “I (Je) believe (crois) that (que) no (non.)” This can be used to express a less certain “no.” This can be both formal and informal. 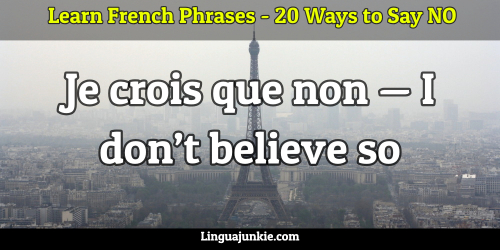 It literally translates to “I (Je) think (pense) that (que) no (non.)” This expression can be used in any situation to express an uncertain “no.” 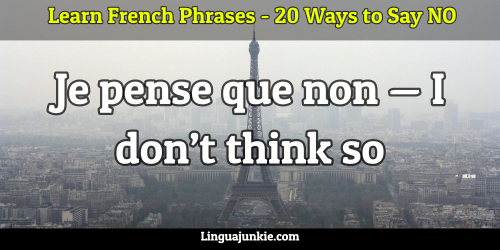 This can be formal or informal. It means that something is likely to be a “no.” 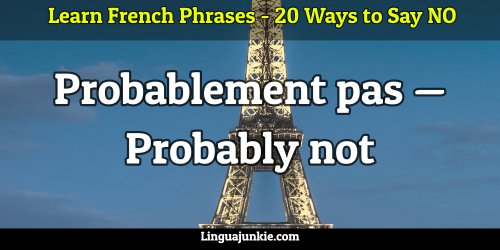 Now you know 20 fun ways to say No in French.

How do you say yes? Here: Say YES in French.

But if you want some actual French learning resources, then check these out.

P.S. Want to speak French with an easy 3 minute lesson?

Then check out FrenchPod101. They have 3-10 minute audio/video lessons that get you speaking and understanding French. So, if you want to speak and learn this language…