Counting in French 1 to 100. Is it hard? No! If you are learning French – all those words, pronunciations, phrases – you also NEED numbers so you can…

So, here’s how you count and master French numbers. If you want to just learn 1 to 10, don’t worry –  I break these down step-by-step so you’re not overloaded. You’ll learn how to count, read and say the numbers out loud in the following steps. 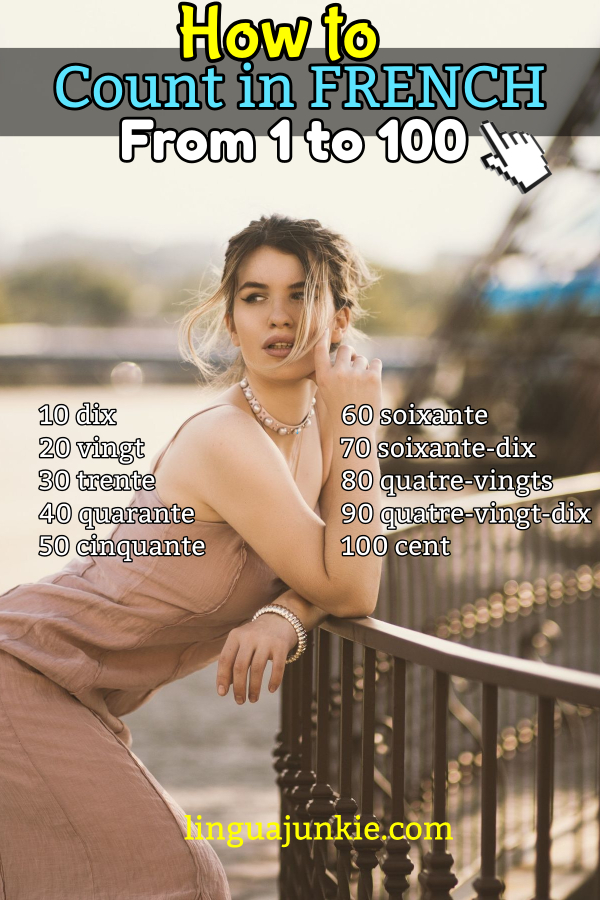 You should also listen and hear real French. Try this Free Lesson from FrenchPod101.com (click here to visit) and learn a bit of French right now!

Let’s start with the basics.

To help you remember these first five numbers, there is a little joke.

Six is easy because it has the same spelling in English, “six.”

Numbers are crucial for sharing information. All phone numbers in France begin with 0—“zéro” and the second number will be a number between one and six. A typical French phone number would look like this: 01.43.65.99.23 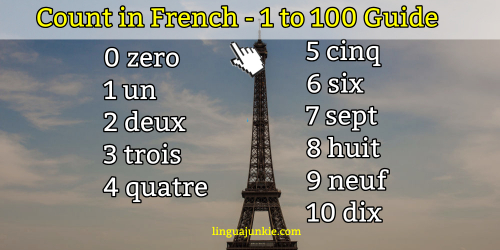 Let’s continue your “counting in French 1 to 100” mission.

Numbers are important when expressing age.

Eleven is “onze.” Twelve is “douze.” “Douze” is similar to the English word dozen. Thirteen is “treize.”

Fourteen is “quatorze.” Another random joke to help you remember: how did the fourteen cats row their boat? They used cat oars. (“Quatorze.”)

Fifteen is “quinze.” Picture fifteen cans of corn in the cabinet. How many cans are there? “Quinze” cans. 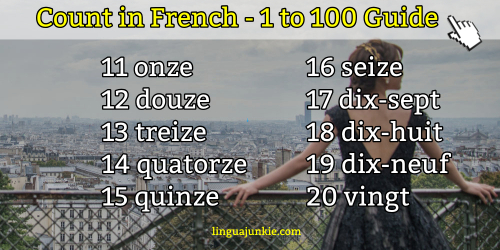 So, here’s a chart for review.

You’ll need “in-between” numbers for counting in french 1 to 100.

When adding one to these numbers, the French use the word “et” which means “and.”

Remember, this only applies to the numbers ending with a one. Like 21 and 31. But what about in-between numbers like 23 and 56?

For example, twenty-two is simply “vingt-deux.”

The pattern continues for all of the in-between numbers until number sixty-nine, which is “soixante-neuf.”

Notice that for official times, such as movies, train and bus timetables, and school schedules, the French use 24-hour time. The time 20:25 is the same as 8:25 in the evening.

Let’s finish this counting in french 1 to 100 guide. 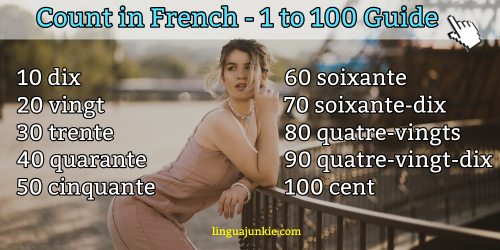 …watch out! Here comes a curveball!

The French do not have a word specifically for seventy like they do for twenty, thirty, forty, fifty, and sixty.

The 70s in French

Instead, they take sixty and add ten: “soixante-dix” means seventy. For the rest of the seventies they just keep adding:  “soixante-et-onze” (60+11=71).

Then, it gets even more mathematical.

The 80s in French

Eighty also doesn’t have a word.

Once again, the French rely on math skills to create the number. The number eighty is “quatre-vingts” which means “four twenties” or mathematically 4 x 20=80.

The 90s in French

Alright, here’s a quick chart to help you review the French numbers 10 to 100.

If you want to do simple math in French, use the expressions “plus” for plus, “moins” for minus, and “font” for equals/makes.

Be sure to print this tutorial out for later review. It’s always good to review things again and again until they’re stuck in your head.

Did this help? If you want extra help, check this out too:

P.S. Want to speak French with an easy 3 minute lesson?

Then check out FrenchPod101. They have 3-10 minute audio/video lessons that get you speaking and understanding French. So, if you want to speak and learn this language…

4 thoughts on “Counting in French 1 to 100: Easy French Number Guide.”