You might know how to say hello in French but…

How do you say bye in French?

It’s “Au revoir.” So, if there’s only one French word you’ll remember from this, let it be that. But, wait. You’re a smart person. You want to learn and speak more French. So, you’re going to learn 15+ ways to say bye in French. This will only take you 2-3 minutes. Also, be sure to listen to the audio for pronunciation. 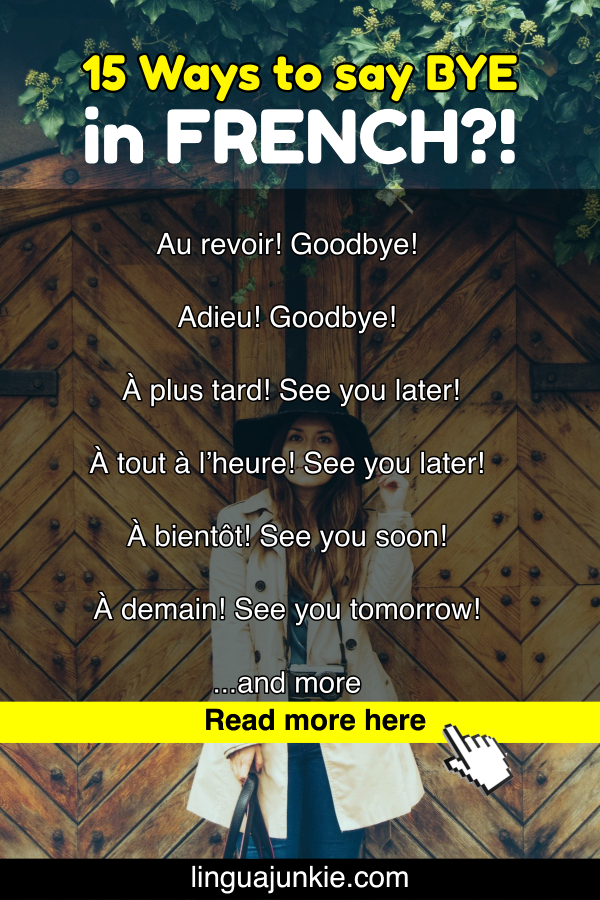 Au revoir is the most popular way to say goodbye phrase in French.

Au revoir literally means “until we see each other again.” Voir means “to see,” so revoir is to “re-see” or “see again.” This can be both formal or informal.

Adieu is how you say goodbye in French. This  one means you might not ever see this person again.  It can also imply that it may be a very long time before you will see him/her again.

Adieu literally means “until God” (à means until; dieu means God.) This is a very serious goodbye that indicates to the other person that this might be a final goodbye. This could be used when someone might be heading off to war or when someone is angrily breaking off a relationship with someone. You would not use this expression for a casual, day-to-day goodbye.

By the way, how do you say farewell in French?

This is a very casual way to say bye in French.

À plus tard means “see you later.” À means “until;” plus tard literally means “more late.” This can be used informally with friends with whom you will visit again soon.

This phrase is sometimes shortened to à plus. When abbreviating this expression using a keyboard, some people use à+ or @+.

A common expression for “see you later” is à tout à l’heure. This is often used with friends. This phrase is sometimes abbreviated to “à toute” (ah-toot) which translates to a shorter version such as “see ya” or “later.” In the abbreviated form, this expression is very informal.

À bientôt is a common phrase that means “see you soon.”

It is an informal expression that is common among friends and colleagues.

This is an informal phrase you can use to indicate you will see someone the very next day.

It is popular in the Italian language and is now used in many different languages, including French.

This is the simplest way to say bye in French.

Salut means “bye,” but it can also be used to mean “hi.” This is usually an informal goodbye between friends.

When someone you know (either formally or informally) is heading off on a trip, this is how you say bye in French. Bon voyage means “have a good trip.” Bon means “good” and voyage means “a trip” or “a journey.”

When saying goodbye in French, if you would like to wish him/her a good day, you would say bonne journée. Bonne means “good;” journée means “day.”

This can be used in both formal and informal situations.

Beware of confusing this expression with the common French expression for hello/bonjour. It also translates to good day, but it used only when you first greet someone. Bonne journée is the “good day” to use when you are leaving someone.

11) Bon après-midi! Have a good afternoon!

Bon après-midi means “good afternoon.” If you are leaving someone and want to wish them a good afternoon, this is an expression that can be used in formal and informal situations.

Informally, it can be shortened to bon aprèm. The shortened form would be used for a more casual situation.

If you are saying goodbye to someone who is ready to go to bed, you can wish him/her a bonne nuit.

13) Bonne soirée! Have a good evening!

Bonne soirée translates to “good” (bonne) “evening” (soirée.) This can be used formally or informally to wish someone a good evening. If someone is going out to a party or on a date, it would be polite to wish him/her a bonne soirée.

When saying goodbye in a letter or on the phone to someone with whom you are very close like a loved one or a family member, you may use the expression bisous which means “kisses.” This is definitely not for a formal situation and should only be used with someone with whom you feel comfortable showing affection.

Another word for kisses is bises (pronounced beez.) It is very informal and is used in an affectionate way to say goodbye to someone on the phone or in a letter.

A very intimate goodbye that should only be used with those you love is Je t’aime. Je t’aime (which is pronounced jhuh-tam) means “I love you.| It is an extremely affectionate way to say goodbye to someone. It is specifically used when speaking to one person.

Je vous aime also means I love you, but it is used when speaking to more than one person. It is pronounced jhuh-vooz-am.

Now you know all the fun ways to say goodbye in French.

Well, you can print this page out for extra review. You can check out these next few lessons.

Or, if you honestly want to learn French and stop reading articles, I suggest FrenchPod101.