Oh hey! What’s Russian learning without some proverbs and sayings? Russian is filled with a TON of them so feel free to browse through the many parts I post.

In part 5, you learn the next set of Russian proverbs with English translations and explanations. And if you REALLY want to learn to Russian with effective lessons – Sign up for free at RussianPod101 and start learning! Ready? Cool.

41. If you chase two rabbits, you’ll catch neither.

This proverb is also available in Japanese! And possibly is universal, but I haven’t confirmed. But the point remains, if you try to chase 2 things at once, you’ll get none. Rabbits. Goals. Juggling language learning, guitar learning and programming will be a mess and you won’t reach mastery. Focus is key.

This is a response to questions that have obvious answers or 1 guaranteed answer. Is this the sky blue? Do bears poop in the woods? Well, just like two times two is four. Good Russian idiom to use when someone asks something obvious.

This is a universal idiom and just as in English, it has the same meaning in Russian. Some things are just a drop of water in an ocean – too small to matter.

44.  A water drop cuts through stone.

Over time, consistent drops of water will cut or sharpen a stone. This is the Russian equivalent of ” Little strokes fell great oaks” where large, tedious tasks can be defeated through small consistent, effort. Similarly, on the negative side, something can be brought down with enough persistence. For example, consistent stress on a person… or smoking for too long.

45. You cannot break a wall with your forehead.

While some things can be taken down with waterdrops… other methods simply don’t work. Like breaking walls with a forehead. This Russian idiom is meant for impossible tasks. Or methods that simply don’t work. You can’t break a stone with your forehead but a drop of water will, eventually.

This is the Russian version of “ignorance is bliss.” Except, in this case, your youth and health suffer as a result of “knowing too much.” This is geared towards the somewhat pessimistic view of life that Russians used to have – given their rough history – that life is tough. (No clue about it now).

Wolves and bears make lots of appearances in Russian culture. And in proverbs too. This one means that work, pressing things and other matters won’t simply disappear – unless you do them. They need to be addressed. While a scary wolf might run back into the forest, your work won’t. 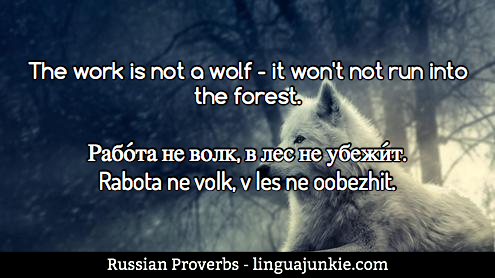 49.Don’t fight with the strong one, don’t sue the rich one.

Interesting Russian proverb and one that bears truth. Definitely sprouts from the common Russian worker that supported much of Russia in it’s history – and the power people they were controlled by. You don’t confront someone stronger than you with a fight. In other words, don’t challenge people where they’re in an advantage. It’ll be bad times.

50. The wolf being fed enough nevertheless looks in the forest.

Wolves again! This is about nature and types of people. Thieves will be thieves. Complainers will be complainers. And wolves will be wolves. You can try to please one – but his nature will pull him back into the forest or back into his ruling habits.

What do you think?
What’s your favorite proverb?

Should I add more?