Want to learn the Korean alphabet a.k.a hangul?

Well, here’s the guide that will help you nail down all the Hangul characters.

First, read through to get an understanding of how the letters and pronunciation work. Then, I’ll give you a printable PDF Hangul worksheet to practice with. Cool? Cool.

PART 1: All About the Korean Alphabet: Hangul (Hangeul)

Hangul (Hangeul) is the Korean alphabet or writing system made by King Sejeong the great in 1443. Before the creation of Hangeul, the majority of people such as farmers, fishers, hunters, and others could not read or write. Only those of the highest class were literate. So, King Sejeong decided to make simple letters that anyone can learn to help  people regardless of their status in life.

So, today you’ll learn all about the Korean alphabet from a to z. 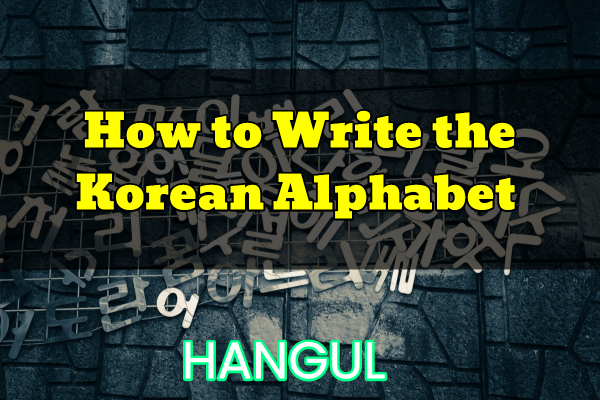 The single consonants are as follows:

These letters are sometimes a bit tricky to pronounce and it takes a lot of practice to be able to pronounce them properly, especially because Korean pronunciation is significantly different from how English letters are pronounced.

(Note: ㄴ, ㅁ, and ㅎ were not included in any of these classifications, as they are just pronounced normally as their respective sounds. While ㄹ and ㅇ have special cases also which will be discussed as this lesson progresses.)

Aspirated consonants are pronounced with an extra puff of air from your mouth. You can check this if you try to pronounce these words with a hand in front of your mouth. You should feel the air touches your hand.

Note: The small ‘h’ beside the corresponding sounds represents the aspirated sound of each letter. This is not to confuse with ‘th’ or ‘ph’ which might be mistaken as ‘th’ (thing) or ‘ph’ (phone).

Tensed consonants are the double consonants that are formed by combining the basic vowels. These are:

There is more emphasis on pronouncing these letters. While the basic vowels sound more relaxed and soft, these letters sound sharper.

– Pronounced as ‘l’ but a bit different from the usual English pronunciation when your tongue touches the teeth. This ‘l’ sound is a bit shorter and your tongue should only touch behind your teeth. (Example: 라면 = ‘la-myeon’ which means ramen)

– When ‘ㄹ’ is in between two vowels, it is pronounced as ‘r’ such as 사람 (sa-ram). Take note that this ‘r’ sound is different from the usual English pronunciation because this ‘r’ doesn’t have the rolling ‘r’ sound.

– When used as the first consonant, it is actually forming a vowel. Every vowel requires a ‘ㅇ’ at the beginning of each word, so basically there is no corresponding sound to it but the vowel itself.

– When used as the final consonant, it is pronounced as ‘ng’. (Example: 방 = ‘bang’ which means room)

In Hangul, there are 10 basic vowels and 11 double vowels. Vowels always include the character ㅇ in front of each letter. The basic vowels consist of the following:

As you notice with the vowels ㅏ, ㅓ, ㅗ, and ㅜ, when added with another line, it adds a ‘y’ on its corresponding sound and you just need to remember that to memorize it easier.

Now let’s look at the double vowels or vowels which are formed by combining the basic vowels.

Let’s see how they are pronounced.

To wrap it all up, here’s a hangul chart for you to save and review.

On Learning the Korean Alphabet/Hangul

Now, you should be fairly acquainted with the Korean alphabet and the pronunciation.

If you want to start practicing, check out my guide here:

If you want a Korean Hangul PDF worksheet, then check out this Worksheet from KoreanClass101:

Final tip: Do not rely on the English romanizations when you’re learning Hangul, but just learn the language as it is and focus more on listening to the pronunciation sounds. There are lots of resources that you can find online. Have fun and enjoy learning the Korean language!