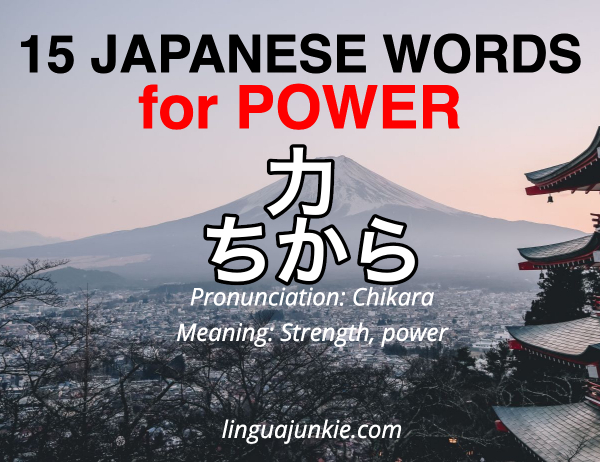 Want to know the Japanese words for power?

Well, Japanese has many types of words… depending on the context.

When you add 力 to kanji characters, you can manipulate the meaning of power to specify what you mean.

So, let’s look at all the must-know Japanese words for power.

Want to learn how to read and write in Japanese? Get your free Japanese Hiragana/Katakana Workbook.

Chikara is one of the most basic Japanese words for power. It doesn’t have specific nuances, so it’s adaptable in many contexts. You can combine this word with other kanji characters to show the type of power… which you’ll see down below.

This word represents power with a strong force or movement associated with it. Hakuryoku can describe action movies, powerful paintings, or intense performances. It can be the feeling of breathlessness after watching something exciting or moving.

Chikara zuyoi means very powerful. Chikara implies power, and zuyoi means strong. It helps exaggerate the amount of power or strength. If chikara is not enough, you’ll want to use this one. It’s also possible to use it when listening to a song sung with passion.

Describing political power can be done with the word kenryoku. Kenryoku is different from other words that mean power because you can only use it in the context of politics or royalty. In addition, general words for power like 力 or chikara can be too vague in these situations.

Tsuyoi means strong and is one of the most common Japanese adjectives.

You can use tsuyoi in different situations. It’s perfect to talk about a strong personality or even a strong sports team. Tsuyoi is a general word, and you’ll find that you can combine it with chikara to form chikara zuyoi (the word mentioned above), meaning very strong or powerful.

English words written in Japanese characters are becoming more popular in Japan. パワフル is the word “powerful” written in Katakana – one of the 3 Japanese alphabets. It means powerful but feels young and modern when written this way. It’s not great for formal contexts but can add some flair to everyday Japanese speech. In contemporary slang, パワ, pawa, can be combined with other shortened English words. An example would be パワハラ, pawahara, meaning power harassment.

The amount of military power can be described by buryoku. You would likely use it in contexts to show a military’s capabilities, and it can be helpful when you need to talk about a particular country’s military power. If you use the basic word for power, chikara, it wouldn’t be clear whether it is military, political, or influential power.

Jitsuryoku means someone’s true strength and ability, and it is a significant compliment if someone says that you have a high amount of jitsuryoku. Compared to the word “ability” in English, it shows a permanent ability level deep inside you.

This word describes influence and power. It represents a person’s sphere of influence. It is similar to kenryoku, which means political power or authority. However, the main difference is that seiryoku is purely about influence and not any kind of authority.

Tairyoku describes a person’s physical strength, and it’s great for talking about your physical shape. The kanji for tai represents the body, and the kanji for ryoku represents strength. When both are combined, it means how much power your body has.

If you need a word representing the situation when you’re using all of your strength and power, chikara ippai is the one. An athlete might use this word after a competition to say they tried their best, and it’s a great way to show how much effort you put in.

Chikara zuku means brute force or power. It’s the perfect word when you don’t have a key, but you’re only trying to open a door with your strength. Rather than using your intelligence to solve a problem, it applies to situations when you’re simply using physical force.

Motivation can also be a power. Kiryoku represents the kind of power that you use when you’re motivated. If you are not procrastinating and getting all of your tasks done, you have kiryoku. The kanji ki means feeling, and it is combined with ryoku, meaning strength. You can show your intense feelings of motivation with kiryoku.

Money can make you financially powerful. Zairyoku is the power someone has when they can have political, social, and economic power due to their finances. It’s a particular kind of power that only applies when it is due to wealth.

Now you know the many kinds of Japanese words for power.

In fact, some would be good as tattoos if you’re looking for Japanese tattoo phrases.

And in general, the Japanese language has a variety of other interesting words like… beautiful Japanese words if you click the link.

Anyway, which word was your favorite?