Want to learn about Japanese pronouns? 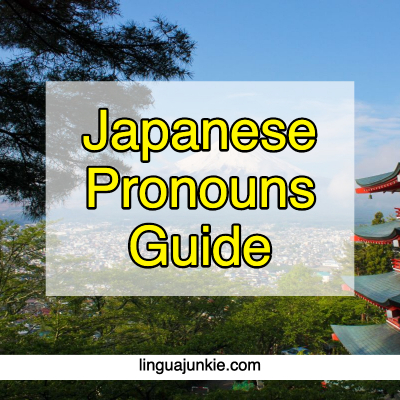 And of course, they exist in Japanese. But…

Japanese personal pronouns are tricky because of the wide variety you can use. Even something simple like saying “I” can have at least six different word choices in Japanese. Plus, to add on some more trickiness, you don’t always need to use pronouns in order to speak correctly.

So, Japanese pronouns are like additional words that add more meaning and context. This is why choosing the correct word for the pronoun can depend on what nuance you’re trying to show.

For example, if you want to sound masculine, you can use the word ore instead of watashi for “I.”

Now that you know the deal with Japanese pronouns, let’s take a look at the actual words.

First, let’s look at all the ways to say “I,” “me” or “myself” in Japanese. You’ll find that some of these should only be used by guys and some by ladies. So, there’s a bit of Japanese pronoun gender nuance to master.

Watashi is the most generic and neutral way to say “I” in Japanese. If you don’t know which one to use, you should choose this one. This is gender neutral.

Watakushi is a more formal way to say watashi. It is usually only used in political speeches or formal writing.

Women sometimes say atashi to give off a cool vibe. This is a variation on watashi. So, this is very much one of the most common Japanese female pronouns.

Men use this to refer to themselves. It’s casual and can sound a bit childish. You should only use this when you’re with friends and family.

Ore is a harsher way to say “I” that men tend to use.  Also, used amongst friends.

When referring to yourself, you can also use uchi. This is very informal and is more for talking with your friends and family.

Now, how do you say you in Japanese? Let’s look at the Japanese second person pronouns. There are plenty — polite, casual, and rude.

This is a neutral way to say “you” and what you’ll see in textbooks and translations. However,  it it can actually come across as rude if you’re not careful. In general, if you want to say “you” in Japanese, you should just say the person’s name instead of saying anata.

A casual way to say “you,” kimi is usually said by men towards those of lower social status or hierarchy. For example, underlings at work or school friends of a lower grade.

Omae is a harsher way to say “you,” that is a part of masculine speech. It is said between men or when you are looking down at someone. Something you can use with friends but also a word that will get you into trouble if you’re use it elsewhere.

This is even ruder than omae, and sounds strong. It is used by those who are trying to sound aggressive.

Kisama can act like a swear word when you want to say “you” but in an insulting way.

Now that we’ve covered the “you,” let’s move on.

Kare applies to men and means “he” or “him.”

Kanojo is a word used towards women and means “she” or “her.”

This is an offensive way to say “he” or “she.” It can apply to any gender and sounds like you’re mad at the other person.

Similar to yatsu, yarou is also a rude way to say “he” or “she.” Men tend to say this but it can refer to both men and women. It means something like “scum” and can be an insult.

You can also make a “he” or “she” word by adding the type of person to ano. You can use it for hito meaning “person,” dansei meaning “man,” josei meaning “woman,” and more. Ano means “that” in English. For example, if you see a man walking, you can say ano dansei (that man) to refer to him.

To make the plural form of you, add tachi or ra to the pronoun for “you.” For example, you can take the word anata and turn it into anata tachi, which means “you all.” When converting “you” words to the plural form, the nuance of the word stays the same. With a word for “you” like temee, which is considered to be rude, that would also carry over when you make it temee ra.

Whether to use tachi or ra depends on the situation. Tachi tends to sound more formal than ra, but you can often use either one. Names can also be turned into a plural “you”. If you see someone named Yamada-san with many other people, you can address them all by saying Yamada-san tachi.

Here are some examples of plural “you”:

How do you say we in Japanese? Well…

For “we”, the Japanese language doesn’t have specific words. Instead, it is created by adding tachi or ra to the pronoun for “I”. This is similar to the way it works with plural “you”. For example, you can say watashi tachi or ore ra.

Here are some examples of “we”:

How do you say they in Japanese?

The word for “they” is formed by adding tachi or ra to the ends of the pronouns for him or her. This works similarly to both “we” and plural “you.” You can even add it to pronouns that are formed by ano + type of person. For example, ano josei becomes ano josei tachi, meaning “those women” or “they.”

Here are some examples of “they”:

Now You Know About Japanese Pronouns.

Long story short, you can and should omit pronouns when speaking in Japanese.

You’d only need to use them to add context and meaning to the conversation.

And once you use them, there’s no point in repeating them — because everyone’s aware of the context. Unlike in English, where we keep saying “you, you, you, you,” in Japanese once is enough for everyone to know.