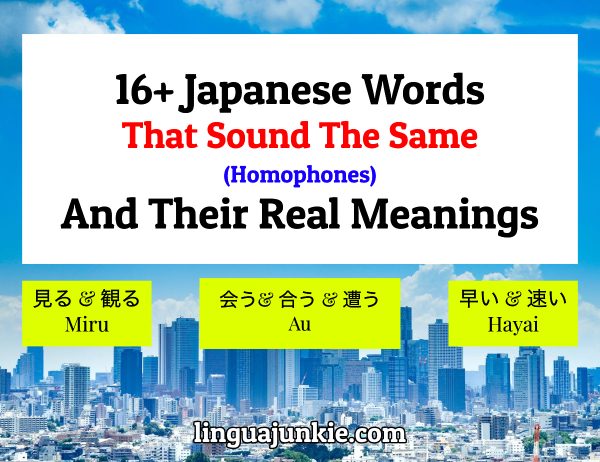 Want to learn about Japanese homophones?

You’ll understand ’em better in the next 2 to 3 minutes?

So, what’s the big deal about Japanese homophones?

First, what are homophones? They’re words that sound the same.

And in Japanese, where kanji have many readings, you end up with many words that sound the same… but with different, or just slightly different meanings. And that’s the tricky part! Some homophones have such similar meanings that a newbie won’t be able to tell the difference without extra explanation.

So, let’s look at the common Japanese homophones list below and see how they’re used.

Want to learn how to write in Japanese? Download your FREE Japanese Alphabet worksheet here & a 7-day course on the Alphabet.

Now, you might also wonder if some of the below are synonyms (words that have the same meaning) but no. The simple test is whether you replace one with the other and have it be correct. And no. For example, you can’t replace 飛ぶ with 跳ぶ and maintain the same meaning.

Let’s take a look at some.

日 and 陽 both mean the sun but with different kanji characters. You should use 日 when you’re talking about the sun itself. In addition, it can also stand for the kanji, meaning Sunday.

陽 is different because it stands for the light of the sun or the warmth that comes from its rays.

In these kanji characters, machi can translate to “town.” However, 町 is the only one you should use officially for town or city. The reason 街 doesn’t precisely mean “town” is because the official definition is “a lively street with many buildings and shops.”

In other words, 町 is a town, but 街 can be more like a downtown area.

Miru, or to see, can be 見る or 観る. The kanji you should choose is dependent on how intently you’re seeing something. It is similar to the difference between “to see” and “to watch” in English.

If you’re casually viewing something, like the view outside the window, use 見る. If you’re intently watching something like a movie, musical, or T.V. show it would be 観る.

Yomu is a homophone that both mean “to read.” You should use 読む in most situations like reading aloud, reading independently, or even reading data. In contrast, 詠む is a specific type of reading that applies only to reading classical Japanese poetry.

You can show off your understanding of the Japanese language by using 詠む next time you read some classical poetry!

Both 飛ぶ and 跳ぶ are about something flying in the air. However, 飛ぶ is for flying, soaring, and moving only in the air. For example, you should describe birds and airplanes with 飛ぶ.

On the other hand, 跳ぶ is the up and down jumping motion in the air, which would apply to frogs or grasshoppers.

The two kanji for “scary” are almost the same. The main difference is that 怖い is the most widely used kanji for “scary.” That doesn’t mean that 恐い is wrong, but it is just that in most official situations, it is standard to use 怖い.

The slight difference between the two kanji is that 怖い simply means scary, but 恐い also has an additional meaning of backing down.

The way people express anger can be different. With these two kanji for “to get angry,” you can define two different types of anger. 憤る is when you’re angry, but don’t express it outright and keep it to yourself.

怒る is the kanji you should use when you’re mad, and you’re not afraid to show it in your face and speech.

Depending on the situation, you’ll need to use either 聞く or 聴く. 聞く is when you’re not purposefully hearing or listening. Some examples will be if you’re hearing the sounds of people talking around you or some background music in a shopping mall. 聴く is the perfect word for paying attention while listening.

If you go to a concert or enjoy your favorite singer’s album, you should use 聴く.

Utau means to sing, but there are two options for the kanji. 歌う implies that there are melodies and words to music that is common or popular. Singing pop songs, opera, or any understandable song with written words would be 歌う.

In comparison, you should use 唄う in a particular situation when there are no actual melodies or words in the traditional sense. For example, a bird singing would be 唄う because the melody and words are not typical of what people would typically sing.

A funny Japanese homophones is a word for smell or nioi. The two kanji have very different meanings, although they both mean smell. You should use 匂い if you’re talking about a pleasant smell like soap, candles, or flowers.

However, if you smell something unpleasant like garbage, you should use 臭い. Someone might misunderstand you if you use the wrong kanji in writing.

Umareru is a unique verb with two different kanji for a similar meaning. Although both mean to be born, 生まれる is the correct kanji for when you’re talking about birth in a general sense.

On the other hand, you should only use 産まれる when you’re talking about the moment something is born. The instant when a baby comes out of the mother’s womb would be 産まれる.

Now you know some Japanese homophones.

With the confusing ones, you know that the readings and meanings are the same… but… usage depends on context.

For example, 見る is used for “looking” or “seeing,” and 観る is used when you’re watching something, like TV!

Your job is to remember the subtle differences.

But, don’t worry, this kind of stuff is odd at first but you quickly get used to it as you read more and more Japanese. If you’re learning with Japanese textbooks or programs, you’ll see them enough and get used to them — that’s the easy way to learn.