Are you Cantonese Beginner?

Of anything that you’ll ever need to learn, it’s how to introduce yourself in Cantonese.

When its time to speak, and you don’t have a set introduction prepared, you’re going to fail. Or you’re just going to give off the feeling that you don’t care about speaking or learning.

And most learners out there, above all, just want to speak and be understood in Cantonese. The easiest way to do it?

So, learn how to introduce yourself in Cantonese and you’ve got 1/3rd of a Cantonese conversation squared away. The rest are topics of interest and closing greetings. 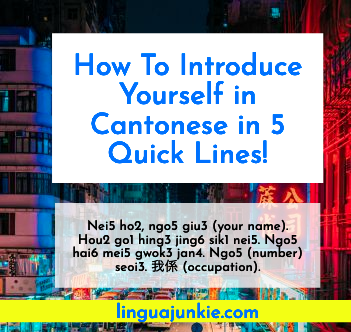 So, here’s what you’ll need for a self Cantonese self introduction. In other words, this is your elevator pitch that you’ll use over and over.

Important: You should know your Cantonese tones in order to get the pronunciation right. In the jyutping (romanization), the tones are marked by numbers as you’ll see below. Otherwise, understand that pronunciations written in brown are not 100% accurate.

So, this is how you introduce yourself in Cantonese. You’re literally saying “I am called “(your name)”

If you’ve not started learning your tones yet, this will help you as a beginner to properly sound the phrases out – just to give you a better idea of the sound.

As you can tell…

By the way, you should also hear real Cantonese, so press play on the lesson below. This is a FREE lesson from CantoneseClass101 — a popular Cantonese learning program. You’ll hear how to say “My name is… ” in Cantonese.

So, let’s say you’re American. America in Cantonese Chinese is 美國  (mei5 gwok3) and adding 人 (jan4), the character for person, turns the word into “American.” You already know that 我 (ngo5) is I.

Oh, and there’s a new character here – 係 (hai6). This is the verb – to be. So, just for your own reference… new vocabulary

Remember how to say “I”? Sure you do! This one is easy. If you know your Cantonese numbers, it’s matter of adding “I” and “Number” and “age.”

We’re going to see the verb “to be” again. See? Tones aside, Cantonese is very simple. The pattern goes as follows…

If you wanted to say you’re a student in Cantonese, you’d just add that word in.

Conclusion – How to Introduce Yourself in Cantonese

Now, you know how to introduce yourself in Cantonese.

So, here’s your introduction script you might want to use. Is it completely perfect? No! But it gets you speaking right here, right now and launches you into learning even more Cantonese. And that’s the best part. Use the scripts below.

If you’re looking for a Cantonese learning app or self-paced lessons, I can recommend CantoneseClass101. They have bite-sized100s of audio/video lessons, like the one you saw above.