Nara is a city in the Kansai area of Japan.

And “Nara” is also a good grammar point to know for the N3!

In this guide, you’ll learn all about the NARA Japanese Grammar variations. And of course, examples are included.

Nara can be used with a noun to make “if” statements relating to that noun. For example, if you’re trying to say “If it’s sushi, I want to eat it” you would use sushi as the noun and add nara. The full sentence would be 寿司なら食べたい (sushi nara tabetai). Notice that nara will add “if it is” to your noun. 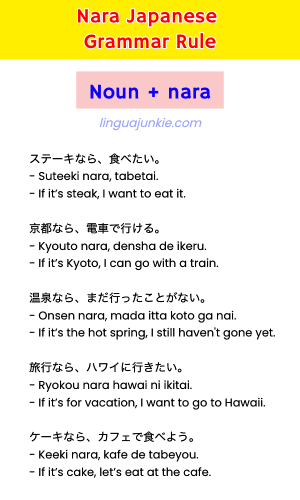 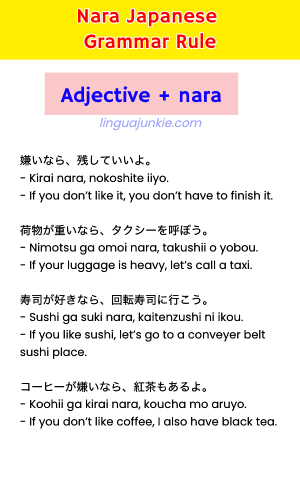 When using verbs with nara it is most similar to adjectives + nara. You can also use almost any kind of conjugation to go with the statement. However, since nara is slightly casual you wouldn’t want to use any of the polite forms of the verb. This makes sentences with verb + nara very versatile. You can express “if” statements in different tenses and situations. 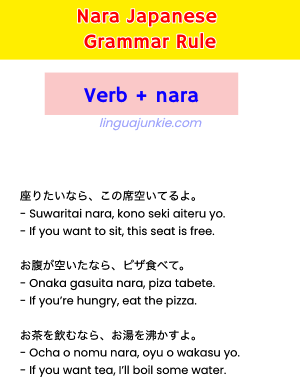 You can easily add more emphasis to your “if” statements by adding no before nara. However, this is not too common. It sounds a bit wordy to use no + nara. Most people will simply omit no. You can add adjectives, nouns, and verbs before no nara as shown in the previous rules. 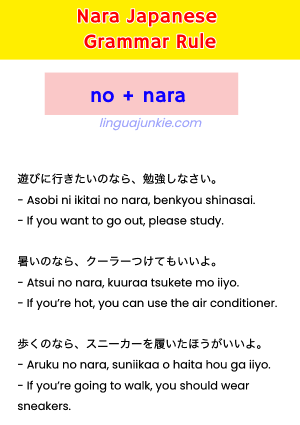 “This” and “that” also work together with nara. Since the words “this” and “that” represent nouns, it works similarly with noun + nara. For example, you can make a sentence like “If it’s this, I want to eat it” or これなら食べたい (kore nara tabetai). Sore, which means “that”, when used with nara also has another meaning which can be more like “then”. You can make a phrase like “Then, I’d like to get a sandwich” which would be それなら、サンドイッチが欲しい (Sore nara sandoicchi ga hoshii). 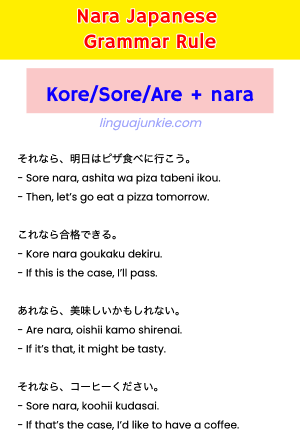 Nara + ba is a bit more formal than only using nara. You can combine it with nouns, adjectives, and verbs with the same rules explained earlier. Another unique aspect is that it can also be used by itself to mean “If that’s the case”. For example, if someone tells you it will be sunny tomorrow, you can reply “if that’s the case, let’s go tomorrow” or ならば、明日行こう！(naraba ashita ikou).

Here’s an interesting use of the nara Japanese grammar rule.

You can use nara by itself to mean “Then”, or “In that case”. If you hear that it’s your friend’s birthday tomorrow, you can reply by saying なら, 明日ケーキ食べに行こう ( nara, ashita keeki tabeni ikou) or “Then, let’s go eat cake tomorrow!”. In this way, the part before nara is implied. You could also say “If it’s your birthday, let’s go eat cake tomorrow” which would be 誕生日なら、明日ケーキ食べに行こう。(tanjoubi nara, ashita keeki tabe ni ikou). 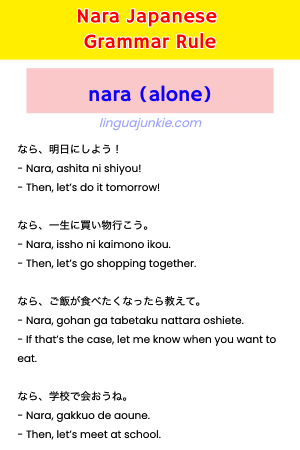 Conclusion – Back to You.

Now, I hope you have a decent idea of how this nara Japanese grammar rule is used.

Or, read through the rules some more.

If you want to save this page, go ahead and print it out.

Either way, thanks for reading and for learning Japanese with Linguajunkie.