Want to know the top 20 Japanese slang words? Good! There are tons. Welcome to part 1 where you’ll learn a few. And I’ll be back with parts 2, 3 and so on. Slang is good to know, you know? So you sound like a modern speaker and not a dry textbook.

Keep reading to find out more. Take this lesson…

✅ And if you REALLY want to learn Japanese with 2,000+ audio/video courses, lessons by Japanese teachers – Sign up at JapanesePod101 (click here) and start learning! I recommend ’em as a teacher & learner. 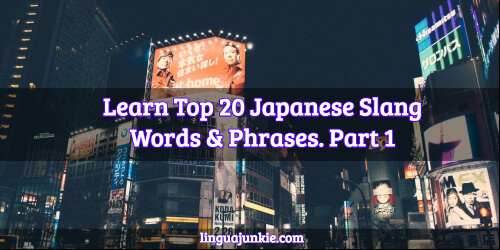 This is used when you hear or see someone/something humorous to a level where you cannot stop laughing. People will say this word out loud or combine it with “cho” meaning “very…” for something that’s funny. Like, 超ウケる (chou ukeru: so funny), You’ll also see 1 word comments like this on social media.

Think of the meaning as… “that’s hilarious” or “that’s funny!” 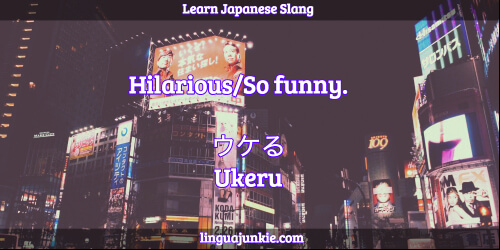 This word was used by a famous Japanese soccer player, Yuto Nagatomo, who’s currently playing in Italy towards his now fiance, then girlfriend, Airi. You make a heart shape out of your hand when saying it to show “love and affection” towards the person you are using this word to.

Yes, he took the Italian word “amore” for “love,” and added a Japanese twist to it. It’s how you call someone “Your love” – one of the many new Japanese slang words to know. 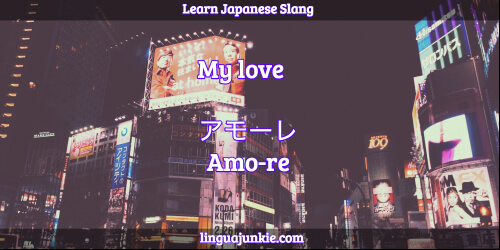 You pretty much turn the word “kami/god” into a verb.. er, an adverb, actually. Like, “he’s godly at this game.” As you can see though, the tteru makes it a present continuous verb, hence I say it looks like a verb.

Kamitteru is used to describe the other person’s skill or achievement and how it is so Godly that it is impossible for you to compete. 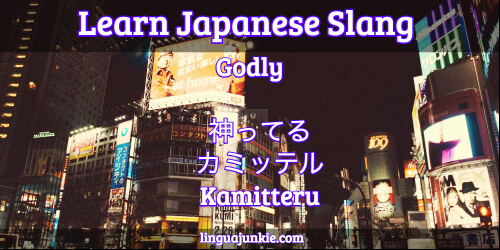 This slang is a combination of two words. First, it comes from “Minka” which means  “home” or “private residence” and “Shukuhaku” which means staying over night. Instead of calling Airbnb as is, in Japan it is called “Minhaku”

This was used as abbreviation of the three words Kekkon Shite Kudasai.

A famous singer in Japan, Daigo, was the one who started the trend of abbreviating words. He’s responsible for this one. He actually proposed to his long term girlfriend, Keiko Kitagawa, and used “KSK.” This now became one of the trending Japanese slang words among high school girls. 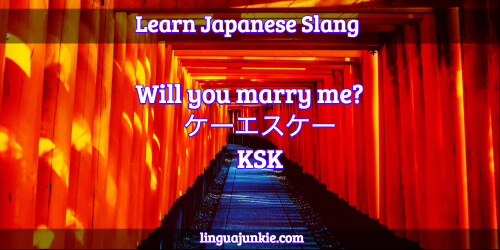 6. “ROFL,” SO funny to a point where you will lose all of your hair.

“Hage” means bald and this is used among young girls as similar to “ROFL” which is more extreme than LOL. It’s like ukeru but you’re taking it to a whole, new level. A level where you lose your hair, as a young school girl.

Yes. A young school girl laughing so uncontrollably that her hair falls out.

Can’t imagine such a level? Neither can I. That’s why it’s funny. It’s metaphoric, stop thinking so much; no-one laughs their butts off either. 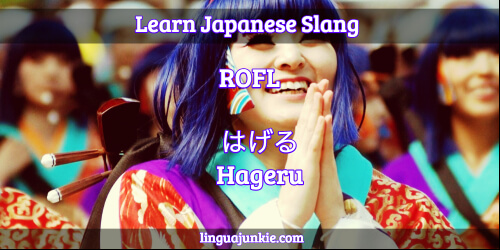 Party people meaning… cocky, arrogant partiers who always hang out at a nightclub or bar lounges.

Basically, this is an abbreviation of Party and People = Paripi. It’s used to point out rather sleazy guys and girls. Now, I, the Main Junkie, have no problem with party people. You can party all night long. But, when looking for someone to date… girls will typically say they don’t want パリぴ. Also, introverted people will use it. 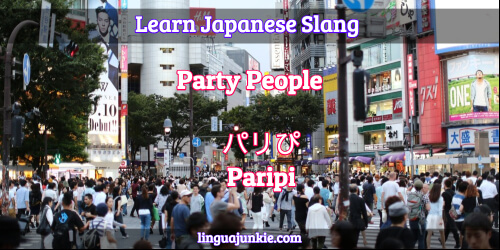 Are you a Paripi? Here’s some Japanese slang words you! Shondoi!

It means, “Honestly, I have no more energy.” This word is a combination of two: Shojiki (Honestly) and Shindoi (Tired). So, after some all-night partying, you might be feeling this. 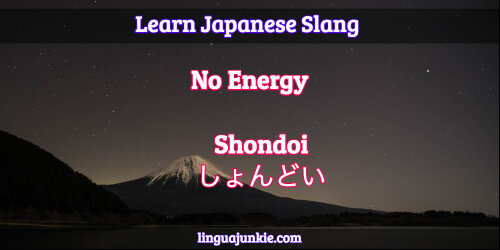 Yes, w. W is used as “lol.” Why? Because it looks like a snickering face. If it is hilarious, you type as many “w” as possible. Usually lower case. You’ll see this in Japanese comments on social media and on the internet. This is text slang. 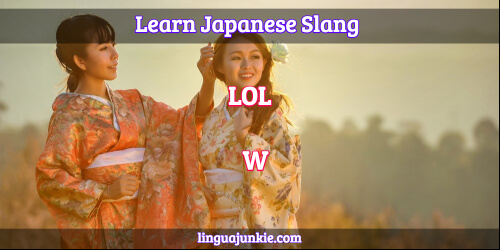 This was first used to describe shopping sprees done by tourists in Japan. (Mostly wealthy Chinese tourists). Now, it is used for when you buy too many things you don’t really need or… if you are actually going on shopping spree. 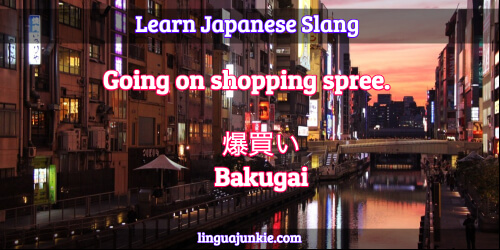 11. Think about someone else before yourself.

Tomin means resident of Tokyo. First is first. This was used by Mayor of Tokyo Koike. She announced she will first focus on the citizens and provide best for them. Political slang!

Yes, they took “gugu” and made it into a verb. Thus, the “gugu” part is in Katakana. It’s used when you do not know the answer to a question or you do not want to answer to a friend with question. Same way as in English – “go google it.” 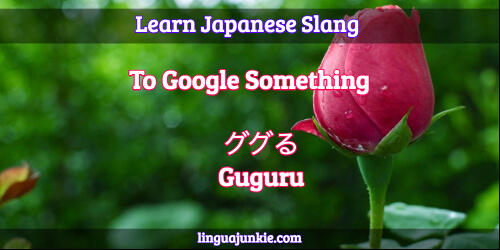 13. You have no chance. There is no tomorrow.

It literally means “it is done” however, in slang context this means, “you have no chance” or “there is no tomorrow.” For example, you realize you have to turn in your homework in 30 minutes. But, you don’t have it done. “Owatteru!!!” You’re toast! Done! 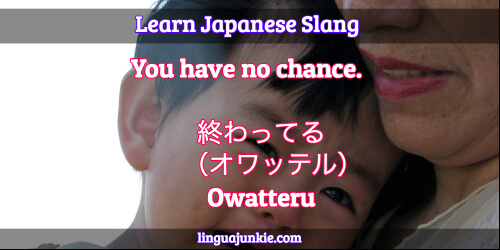 Bimyou is one of the must-know Japanese slang words. And it’s quite vague. Basically, it is used to explain that “I don’t know…” feeling when you are asked difficult question. Like if someone asks you, “where will you be in the next 5 years” or “How is your weekend looking?” When you really have no answer. 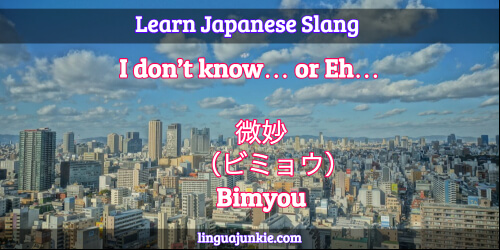 Similar to owatteru but this one means “there is no way getting out” of certain situation.

It is an abbreviation of kuwashiku (detail). Used when you want more details or an explanation of what someone said. And yes, written in English characters. This is text slang.

17. One who enjoys the real world.

Ria jyu is an abbreviation of “Real World” and “Jyujitsu (fun filled)”. It’s used by introverted online people (otaku, introverts, nerds and anyone glued to the computer… like me!) to make fun of the others who enjoy the real world… where the grass is green and air is fresh. Phooey! 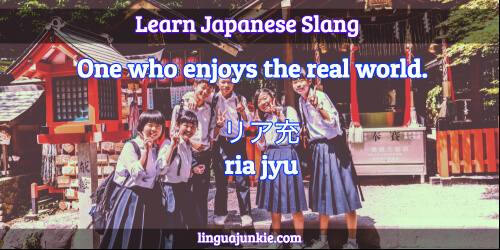 This is used to state the where, what, and with who you are with “now”. People use this on social media a lot just to say what they’re doing now. It’s now used in daily conversation as well like… “I am eating lunch now.” 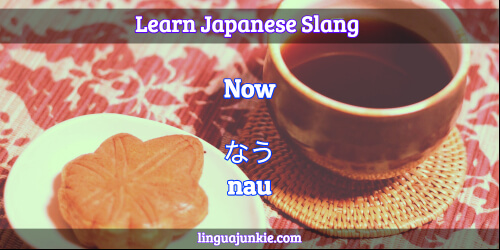 Oh, this is one of the Japanese slang words you’re going to love! Alone on Christmas! Alone, single and lonely! So, this is a word combination of “Christmas” and “Hitoribocchi (alone).” This is a thing because Christmas in Japan is a romantic time for couples!

…so if you’re alone on Christmas, update your Facebook status with: 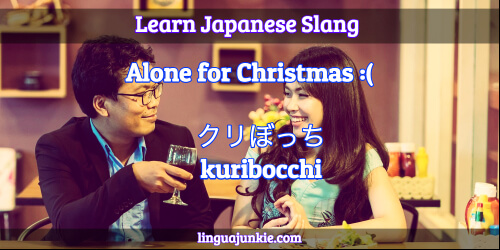 This comes from the word “Favorite” in English and thus became “Faboru.” When’s this used? So, the Japanese are big users of Twitter. This comes form “liking” or “favoriting” someone’s tweet.

And that’s it for part 1 of the top Japanese slang words!

Which of these Japanese slang words is your favorite? Know of any more? Leave a comment below and I’ll add it to this list. I read all the comments!
じゃね