Japanese learners insist on learning through anime. Is it wrong?

No, not at all. Whatever you think works for you.

But if you’re Beginner-Intermediate, aside from having an awesome time watching ’em, you’re getting bombarded with Japanese words that come faster than you’ll ever understand. If they’re all flying by you and you’re just picking up the “watashi” and “anata,” you’re not learning much at all.

There is a way to effectively learn from anime though.

And it involves having Japanese scripts to the actual show. Those are often hard to come by, but by having it, you can read along, pick up the words and be able to re-watch and re-read until the entire damn episode is drilled into your brain.

So, that’s what we’ll do here – with a scene from Ghost in the Shell. 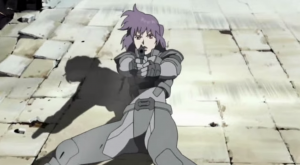 How to use this scene & script to improve your Japanese.

Okay, this is going to be tough. They speak fast. And this is why learning through anime isn’t for beginners or lower intermediate learners. However, having a script on hand, you can easily pick apart what they say, word by word, with enough listens… and progress. Here’s what you should do with the video and script below.

Script from this scene. Print this. Read this. Love this. Re-read it.

Key Japanese Vocabulary from this scene:

Conclusions from this excercise & extra tips:

There are several tough points with learning through anime.

And that was just ONE 3 minute clip. Now imagine trying to master a whole season.

Overall though, I think re-listening and re-reading until it’s all drilled in your head is great reading, listening and speaking practice. Speaking meaning your pace of speech. If you read out loud and you get pretty fast, it’s safe to say your regular speech will get faster as well.

Once you can listen to the video dialogue without the script and know every word, you can definitely say your Japanese has leveled up.