The one word that causes headaches for Japanese learners. There’s too many. Kanji have different readings, translations and meanings depending on how they’re used. Kanji stroke orders. They require lots and lots of practice and memorization and are the source of much pain and despair. 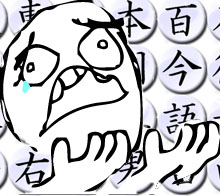 Is it possible to learn kanji without pain and anguish? Yes.

Association is making something unknown or complex simple by associating it with something you already know. Think of your brain as a web, rather than a computer where you can download stuff into. This webby brain makes connections to better understand concepts. If you introduce a foreign concept, such as Japanese Kanji, into your brain, with no connections to what you already know, it’ll fall right through the web. It has nothing to connect to.

So… if you see the mountain, river and tree in these characters, you’ve associated them with images and concepts you already know. Boom.

Here’s what you do with every new Kanji.

Here’s a few examples of how I used association to learn to read and write Kanji.

My examples are pretty dumb. They ignore the little details. They ignore the concept of learning ALL readings for each character and I wouldn’t talk about this in real life, but HEY, it’s the internet! But more importantly, they WORKED for ME.

Note: Associations can come from anything you already know. From what a Kanji character, or parts of it look like, other letters, kanji you already know, shapes, real life objects, etc. It’s up to you to make the creative stretch to make the connection. My associations may sound odd to you because it’s how I learned them and you’ll have your own process of associations. There’s no right answer as to how you see the characters.

I had a Japanese vocab quiz and this was one of the words on it. The way I remembered 社長 was by calling it “net e/x” or net e over x. Why? The first Kanji, 社, has what looks like a Katakana “ne” or ネand the part right after it, looks like the letter t that’s underlined. Thus, net. The second Kanji, 長, looks like a fraction to me… E over X. And so, it was titled as such.

I always remembered this as Box 5. There’s a box and a 5 right below it. Easy, done. Next?

It kind of looks like a fish, doesn’t it? However, I remembered it by calling it “Fin Ta 4.” The top part looks like a shark fin, the TA is the reading for the Kanji 田 which is in the middle, and the 4 comes from the 4 little lines at the bottom. So I’d think to myself, “crap, how do I write fish again? Oh yeah, fin ta 4.” 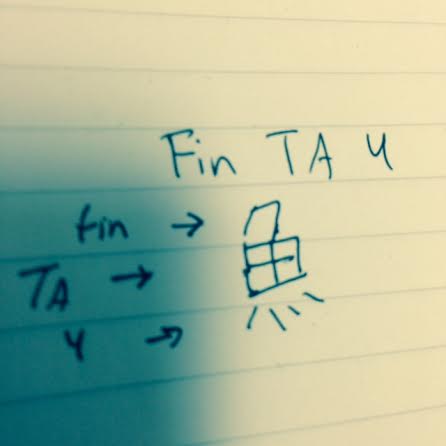 The first Kanji, 結 – rather the first part of it, 糸, is something i call “mu-mu tree.” Yes, sounds weird. However, “mu” comes from the two Katakana “mu ム” sitting on top of one another. Then, the part under it simply looks like the base of a tree. The part after it, is a T-Box – T on top of a box 吉.

Then comes 婚, what I’d call Jo, E, H. The first part of this Kanji has the Female character in it, 女, which has the reading of Jo. The next part looks like E and an H [arguable, i know] that has two extra lines on top and bottom. This second part is a pain to write though.

Now, that’s just how I saw it and remembered it as. Remember, you do what works for YOU.

Here, I used kanji I already knew to make the association. So, it’s “parent-cut.”… kind of opposite of the meaning of shinsetsu, huh? The first kanji, 親 is read as oya and means “Parent.” You can also see it as spicy/see because it consists of characters that mean “SPICY: 辛 and SEE: 見.

Then, you have 切 taken from the verb, 切る, meaning to cut.

Kanji Association: What is it good for?

Kanji Association: What is it NOT good for?

Overall, it’s a means to an end. Once you have the kanji down, you can simply forget the middle-man association you came up with. I’ve used it many times to remember Kanji for tests. Since then, those kanji have been solidly ingrained in my brain and I can write them naturally without thinking about the association.

Remember, your associations will be different from mine. Use whatever comes to your mind first that you can connect with the characters. It can be English letters, numbers, shapes, other Japanese Kanji, etc.

Whatever works for you.

1 thought on “Association: Learn Japanese Kanji with Stupid Examples and without Awful Pain of Memorizing”