✅ Hey, if you REALLY want to learn & speak Japanese with a complete learning system, (2,000+ audio/video courses, apps, study tools and more) Sign up at JapanesePod101 (click here) and start learning! I recommend ’em as a teacher & learner.

1. Getting on a Women’s Only Train Car

Let’s start with the most embarrassing and common one. Foreign guys getting on Women’s Only train cars. Yes, this has happened to me. (Nobody wanted to  tell me until a train attendant ran over minutes later to point it out.) 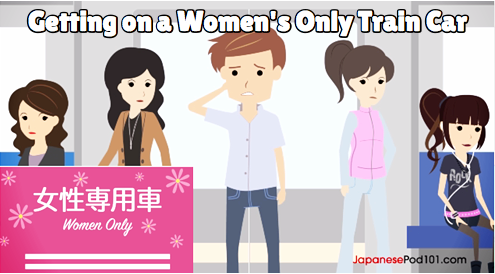 So, why do Women’s only train cars exist? Because groping! You should already know that overcrowded trains are part of Japanese culture. Especially during rush hour when everyone’s on the way to work or on the way home. And in such tight situations… well, someone might get a little grabby. Who you ask? A chikan!

How do you keep your butt off these trains? Look for that pink flowery sign in the picture above. That designates the women’s only car. You’ll see it on the platform and on outside & inside the cars.

During weekends, men can get on as well. Not as crowded.

2. Offering Your Seat in Japanese

Let’s say there’s a pregnant lady or an elderly standing in front of you. Or maybe someone with heavy bags. You should probably offer your seat to them. And you can do it in one word – here it is: 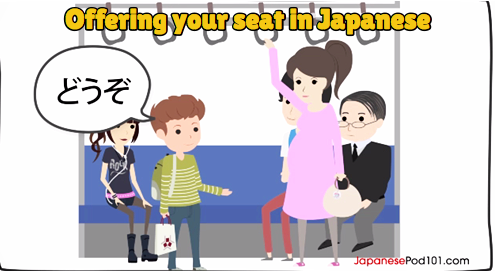 Now, Japanese people are super bashful and polite. You might even get rejected! They’ll say (いいえ、いいえ – iie, iie – No, no). There have been several occasions where I offered a seat and they declined. You can sit back down.

3. Stepping Out so Others Can Get Off the Train

This is just good manners. But, it’s RARELY practiced in Tokyo. Occasionally, you have someone that stands in the middle like a deer caught in headlights, as people try to get around them to get off.

Don’t be that guy. Get off the train and let people come out. 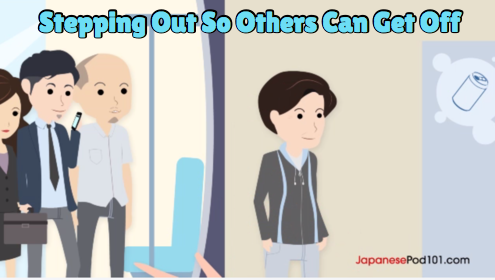 4. Keep Your Volume of Music Down

Yeah, you’re probably blasting some J-Pop. But, is your sound leaking? If it is, your irritated neighbor to the side hears it all. Japanese trains tend to be quiet (except weekday nights, Friday nights until Sundays last train – that’s when all hell breaks loose.)

But it has happened. I got told by an annoyed salaryman to lower my music.

It was in the evening so he was probably tired from work, hungry  and my sick tunes only added to his frustration. Can’t hold it against him.

5. Wear Your BackPack on the Front

Why? It’s not so you look like a pregnant lady. It’s because when you’re shuffling about, your over-sized freshman backpack (filled with books you don’t really need) will knock into fellow passengers. Keep it in the front where you can see it. Where it can’t knock into people. 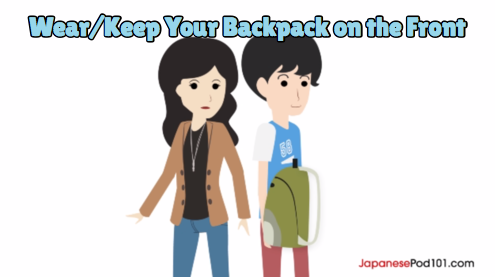 6. “Pushing” Your Way in is Acceptable!

That’s right! If it’s crowded, you’ll get pushed as someone tries to get on. But that’s acceptable! Meaning, you can push your way in when you try to get on. Feels strange right? Well, to allay your worries, you can always say “excuse me.” 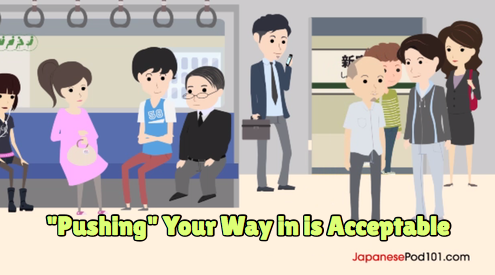 7. Getting Off a Crowded Train

Now you know that you can get on a train by pushing! But, how do you get off? Push! Well, there’s more. You can also use a Japanese phrase that tells people “I’m getting off!” so they can make room for you.

Here’s the phrase – make sure you say it loud enough: 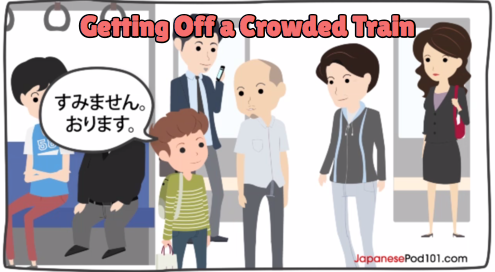 But if it fails, push, push, puuuuuuush.

What do you think? Are there any more crucial rules of Japanese train riding? Do you want more Japanese culture lessons like this? Be sure to leave a comment below.

Source: Japanese Culture for Absolute Beginners – How to Ride a Train in Japan

If you REALLY want to learn to Japanese with effective lessons by real teachers – Sign up for free at JapanesePod101 (click here) and start learning!